Ethnic hate speech and disinformation were rife on Twitter 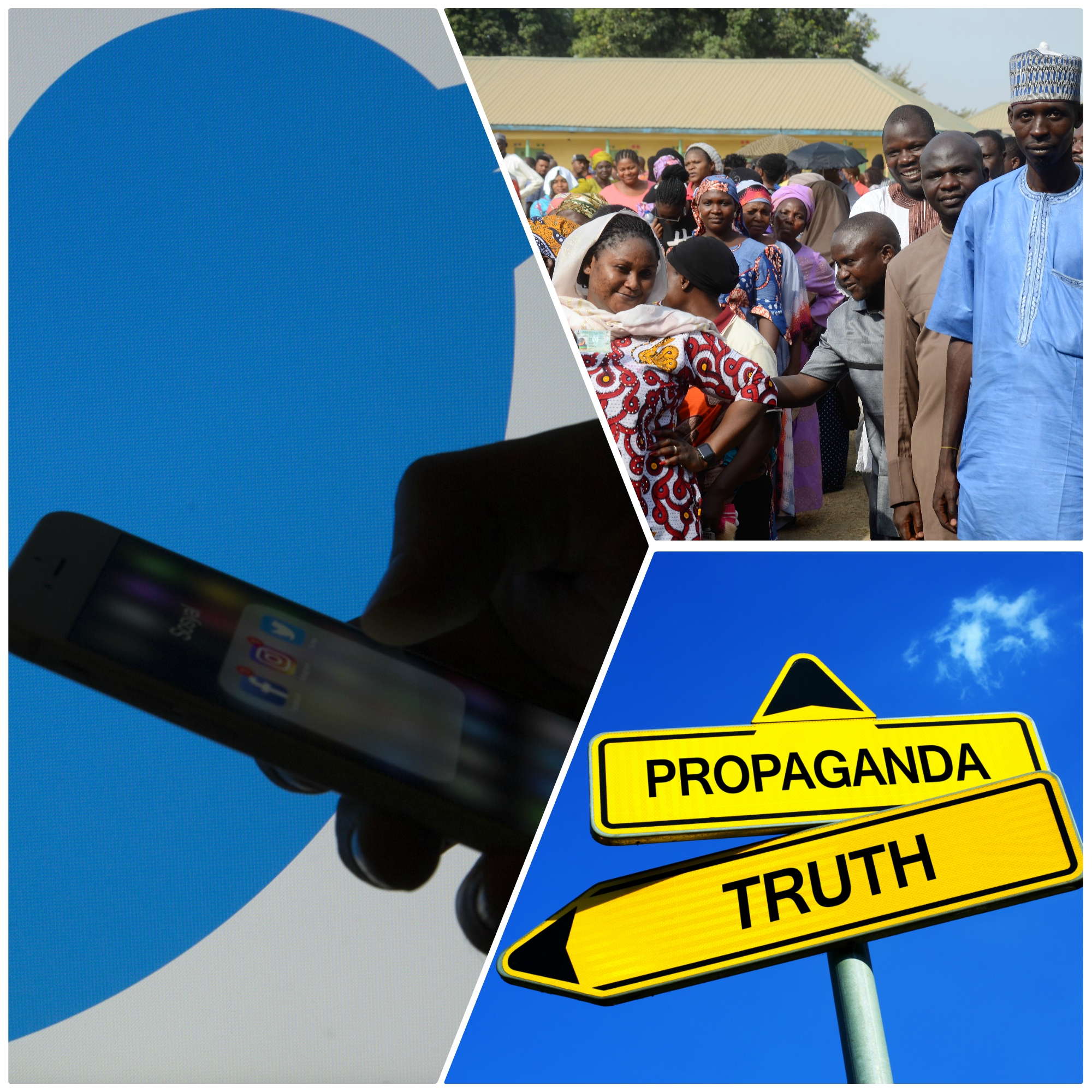 This story is the second in a two-part series on online ethnic hate speech, disinformation and propaganda during the 2019 Nigeria elections. You can read the first part here.

In Nigeria, social media has a history of enabling ethnocentric disinformation and propaganda during elections. During the 2015 elections, Twitter Nigeria descended into a bitter and binary sparring match between supporters of the then-two major contestants, Goodluck Jonathan (PDP, an Ijaw Christian) and Muhammadu Buhari (APC, a Hausa, Fulani Muslim). Twitter became a tool for propagating ethnic hate and party politics.

The 2019 elections were no exception. On February 15, Reporters Without Borders (RSF) released a statement expressing its concerns over an election campaign “polluted by disinformation.”

We have to fight fake news now that political campaigns have started. People/accounts spreading fake news & deliberate misinformation should be reported. In promotion or criticism, everyone must play according to the rules.

Disinformation and politics in African countries

A 2019 study by Dani Madrid-Morales, University of Huston and Herman Wasserman, University of Cape Town concluded that “mis- and disinformation campaigns have been used to influence political agendas” in Nigeria, Kenya and South Africa. The high exposure to disinformation in social media especially during electoral campaigns, leads to a ”distrust” among social media users “because that's where they find ‘fake news’ most often,” Madrid-Morales asserted.

My ethnographic study between October 28, 2018, and May 29, 2019, that covered the 2019 Nigerian elections held on February 23 (to elect a president and a national assembly), and March 9 (to elect governors and state houses of assembly) revealed two major categories of false information: ethnocentric driven disinformation and political propaganda.

Peter Obi, the running mate of the opposition People's Democratic Party (PDP) presidential candidate Atiku Abubakar, was a victim of ethnocentric disinformation during the last elections. Obi was the former governor of Anambra State, in southeast Nigeria. A Twitter account supporting the Buhari-Osinbajo campaign, Coalition of Buhari-Osibanjo Movement, shared a tweet (Figure 1) which accused Obi of “deporting” northerners from Anambra State as governor. 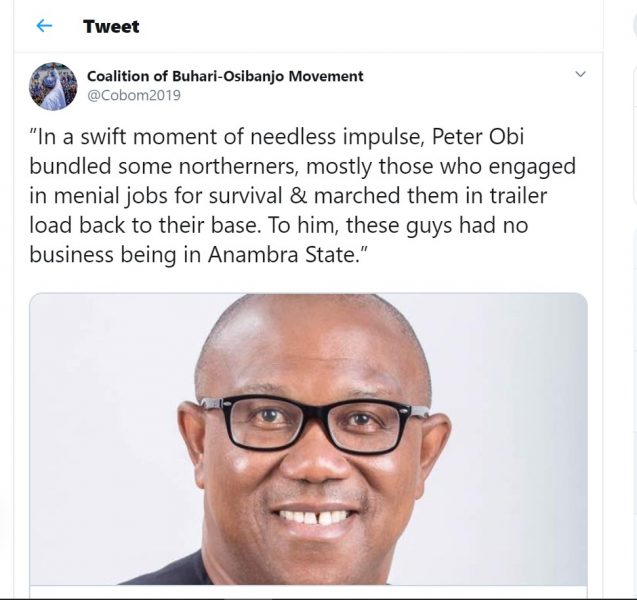 Figure 1: Screenshot of a tweet by Coalition of Buhari-Osibanjo Movement accusing Obi of ‘deporting’ northerners. 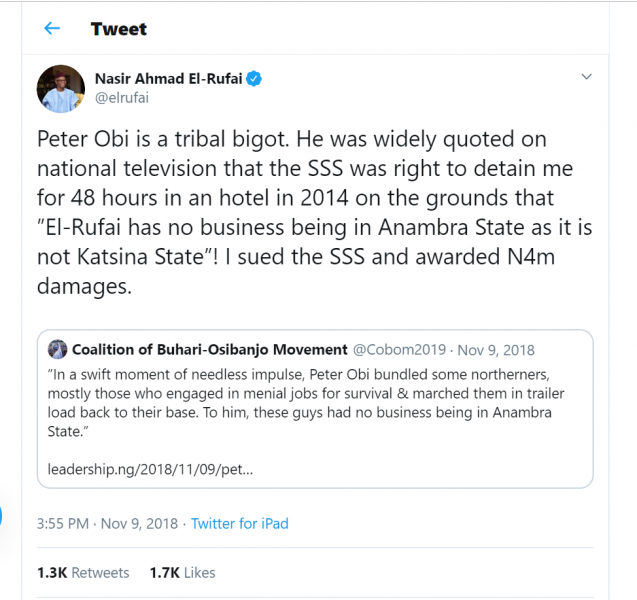 This charge was amplified by Nasir El-Rufai, Governor of Kaduna State and member of the ruling APC, who tweeted (Figure 2) that Obi was “a tribal bigot”. This, according to El-Rufai, made Obi unfit to be a vice president of Nigeria.

In July 2013, 67 Nigerians, mostly from the Igbo ethnic group, “were deported all the way from Lagos and dumped at almost the same spot at the popular Upper Iweka area” in Onitsha, Anambra State, reported the Nigerian Vanguard newspaper.

Obi, who was then the governor of Anambra State, described this action by his Lagos State colleague, Tunde Fashola, as “illegal, unconstitutional, and a blatant violation of the human rights of the deportees.”

Following the public fury that this action generated, Premium Times reported that Obi was also guilty of the same action: In 2011, he repatriated child beggars back to Ebonyi and Akwa Ibom states, both in southern Nigeria. 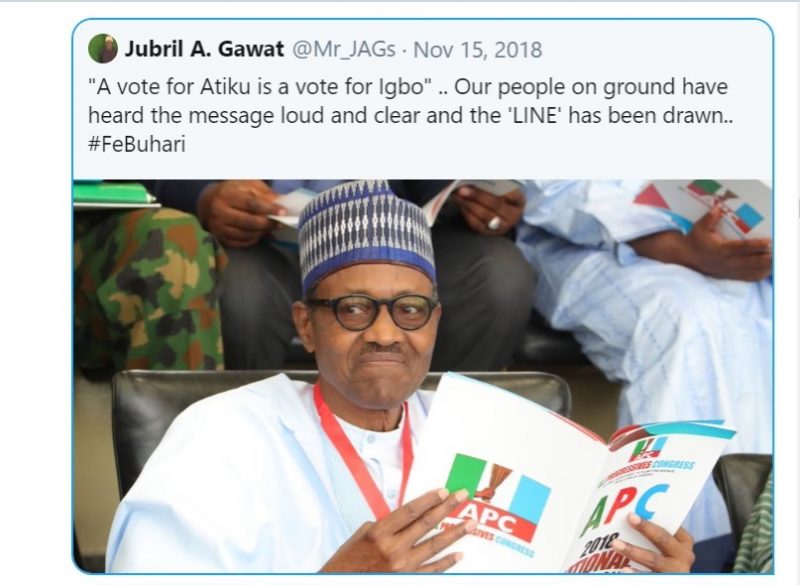 Figure 3: Screenshot of a tweet by Jubril A. Gawat

While Obi did indeed deport beggars back to states in Southern Nigeria, he did not deport northerners and the accusation tweeted (Figure 1) by the Coalition of Buhari-Osibanjo Movement Twitter account was inaccurate. Rather it was APC's Tunde Fashola, who in December 2014, “deported 70 northerners, found publicly begging” back to Kano State, according to the online investigative newspaper Sahara Reporters.

However, this ethnically motivated disinformation was employed by APC supporters on Twitter to discredit their opponent. For instance, Jubril A. Gawat recently appointed as Lagos State's senior special assistant on new media tweeted that (Figure 3) a vote for opposition candidate Atiku Abubakar ”is a vote for Igbo.”

Nigeria is a country where ethnic identities run deep. These divisions are usually exploited during elections by politicians because of the obvious need to pitch their opponents into opposing camps of “we” versus “them”.

Hence, the allegations that Obi deported northerners was meant to re-ignite the ethnic animosities between the Igbo and Hausa, Fulani that led to the Nigerian Civil War.

The aim of these disinformation campaigns was to paint Obi as a Biafran ethnic irredentist. Located in southeastern Nigeria, the breakaway Republic of Biafra, which lasted for three years through a bitter civil war between 1967 to 1970, is largely populated by the Igbo.

Thus, Figure 3 proclamation that “a vote for Atiku is a vote for Igbo…”  was aimed to revive the ghost of the acrimonious ethnic hatred that pitched Hausa against Igbo. In 2019 elections, this meant that Atiku is a supporter of the Igbo who had once tried to break away from Nigeria.

Statements in Figures 1-3 convey strong emotions capable of reopening pent up memories, which in most cases have still not received closure, from both sides of the divide. The United Nations Educational, Scientific and Cultural Organization (UNESCO) maintains that disinformation like this targets the “vulnerability or partisan potential of recipients” by turning them into “amplifiers and multipliers.” Ethnically-charged electoral campaigns not only exploit deeply rooted prejudices but also morph recipients into disseminators of false information. 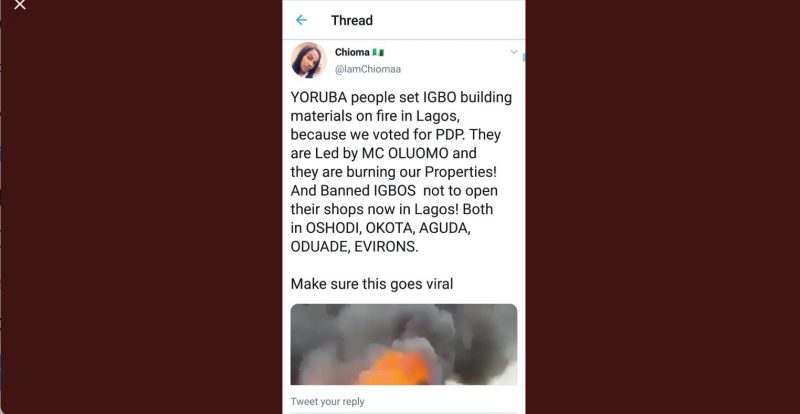 Figure 4: Screenshot of a tweet [flagged and pulled down by Twitter] by Chioma spreading disinformation of Yoruba burning Igbo shops in Lagos

Similarly, ethnocentrism was also used by PDP supporters on Twitter to drive votes against the APC in Lagos State. Figures 4 and 5 show tweets by a PDP sympathizer alleging that Yoruba had set Igbo shops in Lagos on fire.

The stories were false and were quickly dispelled by the Lagos State Police.

A Facebook post, using nearly the same words from Figure 4, and a picture depicting roads blocked by burning tires, circulated the same false claims. The photo used was from a February 24, 2017 protest that took place in a province near Pretoria, South Africa, reported African Check. 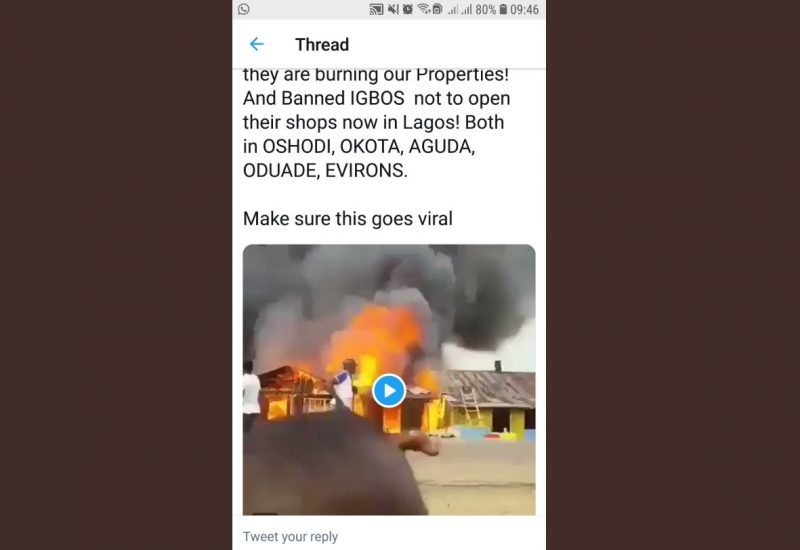 On February 13, Twitter user Souljah tweeted (Figure 6) that Ballard Partners, a PR firm based in Washington DC, which was allegedly hired as a publicist for the Abubakar presidential campaign, had conducted a poll which predicted a loss for the opposition PDP presidential candidate.

The result of the survey was conveyed in a letter signed by Brian Ballard, head of Ballard Partners, on February 5, and addressed to Olusola Saraki, the Director-General of Abubakar's campaign.

Souljah's tweet went viral with over 1 million likes and 1 million retweets for obvious reasons. The presidential election was previously slated to hold on February 16 (later postponed to February 23) and, with this poll coming three days before the elections, would have been catastrophic for the opposition PDP. 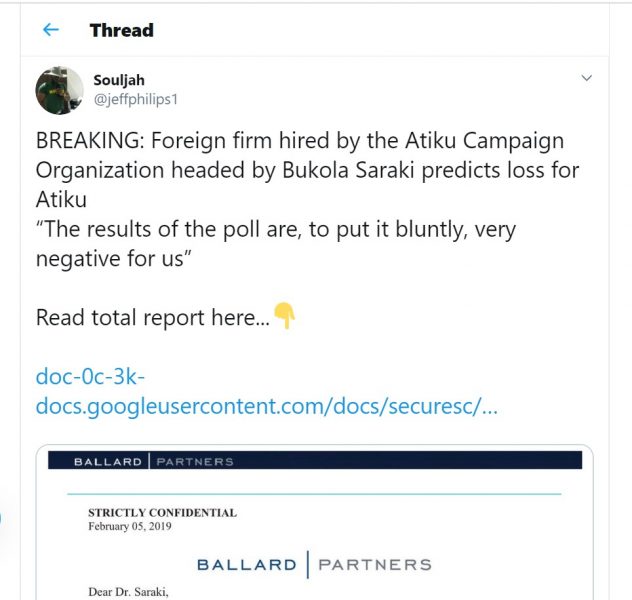 However, by the evening of February 13, Ballard Partners refuted the said survey (Figure 7) which they described as “fraudulent” and maintained that they had not “conducted any survey research on behalf of the People’s Democratic Party of Nigeria.”

Ose Anenih, a PDP supporter reported some of the APC Twitter sympathizers who circulated the fake poll to the Twitter handle of the Nigerian police and the Independent Electoral Commission, the electoral umpire, for “criminally and illegally” trying to “interfere with free and fair elections.”

But this was not the only case of weaponizing disinformation for political propaganda that was witnessed online during the elections. 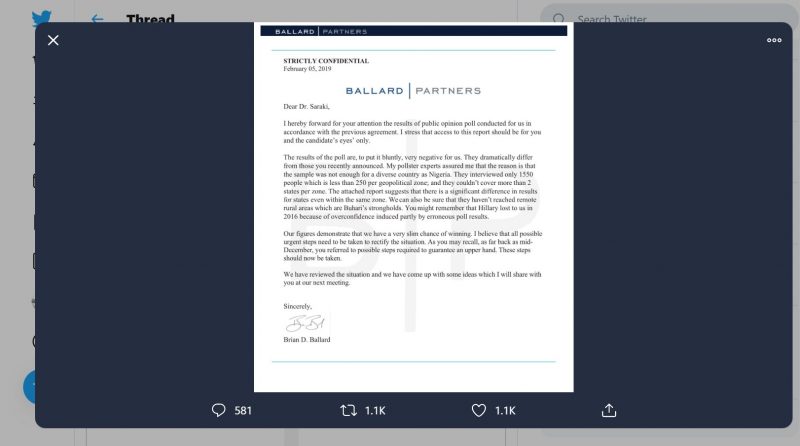 Figure 7: Screenshot of a tweet by Ballard and Partners refuting a fake poll attributed to them.

The many lies of a presidential aide 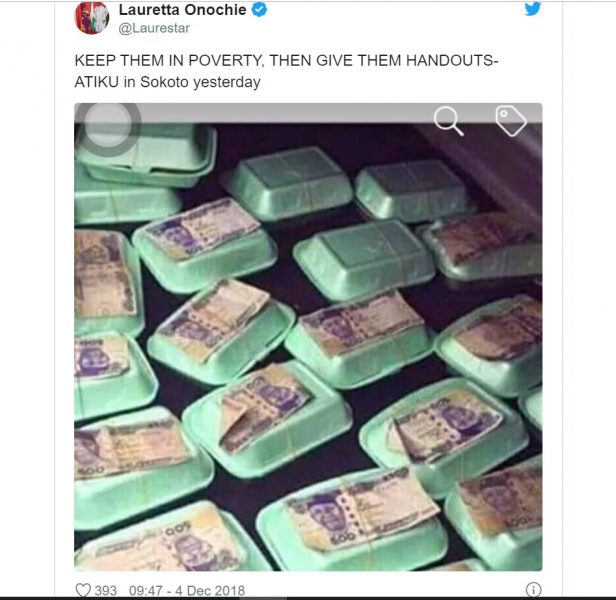 Figure 8: Screenshot of a tweet by Lauretta Onochie, aide to the Nigerian president

On December 4, 2018, Lauretta Onochie, presidential aide to Buhari [then incumbent presidential candidate]  tweeted (Figure 8) a picture with food and 500 naira notes that was purportedly shared with the crowd that attended Abubakar's presidential rally in Sokoto in northwest Nigeria, the previous day.

Onochie's allegations were completely false. In fact, the picture she shared “was taken in February 2017″ at an event unrelated to “electioneering”, Chuba Ugwu pointed out in a reply to her tweet.

Onochie appears to be a specialist in disseminating falsehoods. The International Centre for Investigative Reporting (ICIR), an online news portal, analysed over 1,000 images shared on Twitter by Onochie between August 1, 2018, and July  31, 2019. The analysis revealed that “in at least 12 cases” Onochie “had used inaccurate pictures.”

Section 26 of Nigeria's Cybercrime Act prohibits ”use of threats of violence and insulting statements to persons based on race, religion, colour, descent or national or ethnic origin.” Convicted persons risk a five-year jail term or a fine not less than 10 million nairas [about $28,000 United States dollars] or both.

In March this year, Enough is Enough Nigeria (EIE), a youth-based movement and Paradigm Initiative (PI), a digital rights policy and advocacy group, instituted a court case in an Abuja court against Onochie and Gbenga Olorunpomi, an aide to Kogi State governor.

The two organisations compiled instances of hate speech “gathered from online comments” made by Onochie and Olorunpomi which they deemed to be in violation of Nigeria’s Cybercrime Act of 2015.

Most of the instances highlighted above were not mere happenstance. Rather, there was a deliberate and systematic effort to pass off lies as true information.

This is not surprising considering that both APC and PDP engaged an army of online warriors to either “neutralize adverse” social media reports or “fend off” attacks during the campaign periods. Each side engaged “cyber troops” — “government or political party actors tasked with manipulating public opinion online.’’

This year's elections were a repeat of 2015, where both APC and PDP engaged in “disinformation, misinformation, propaganda” campaigns on social media that were “carefully designed to hoodwink the unsuspecting electorate,” asserts Eshemokha Austin Maho, a Nigerian media scholar. They achieved this through the creation of “bogus social media accounts” from which “smear campaigns” and “doubtful information and propaganda” were disseminated.

The resultant impact was that Twitter became a battleground of ethnocentric disinformation and political propaganda before, during and in the immediate aftermath of the 2019 elections in Nigeria.