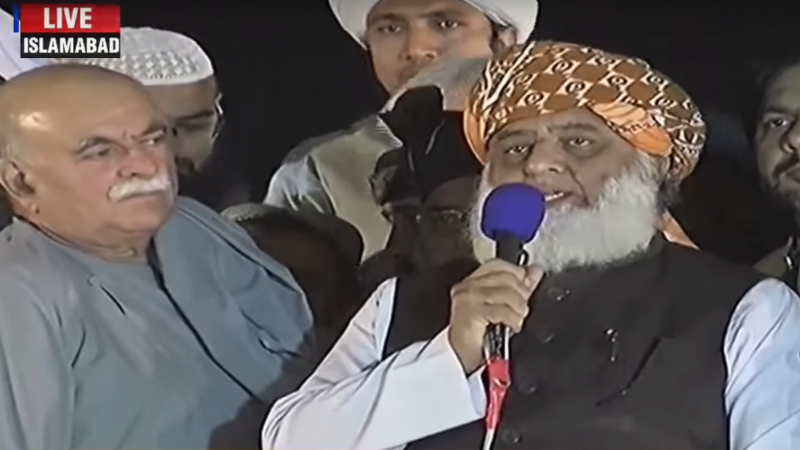 Screenshot of Jamiat Ulema-i-Islam (F) chief Maulana Fazl ur Rehman speaking to the participants of the dharna (sit-in) in Islamabad on November 4, 2019. Via YouTube Channel of 24 News.

Just kilometres away from the Pakistani Prime Minister's House in the capital Islamabad, Jamiat Ulema-i-Islam [2] (Fazal) (JUI-F) Chief Maulana Fazl ur Rehman [3] and some opposition parties with a few thousand supporters staged a ‘dharna’ [4] or a non-violent sit-in protest on 1 November 2019 after a four-day walk to the city.

This ‘Azadi March’, or ‘freedom march’, is a protest demanding [5] Prime Minister Imran Khan's [6] resignation and dissolution of the assemblies. According to the protesters, the 2018 elections were not transparent and the administration was behind the ‘selection’ of the government. Despite three rounds of talks between [7] the Government and JUI-F Shura members, a deadlock continues to persist at the time of this report.

The Azadi March has brought the religious right and secular left together on a one-point agenda of CIVILIAN SUPREMACY. https://t.co/Z6i0oa1xIv [8] pic.twitter.com/yAKXmf8P8f [9]

JUI-F [2] is a rightwing Sunni Deobandi [11] politico-religious party in Pakistan. Just days before the protest started, the federal government banned [12] Ansar-ul-Islam, an alleged militant wing of the JUI(F). Pakistan Muslim League (Nawaz) [13], Pakistan Peoples’ Party [14] and some other stalwarts of the political opposition also took the opportunity to became part of the march to protest against the government.

The protestors are provided with food and drinks by the organizers and during the sit-in, they offered prayers, recited verses of the Quran, and played games to pass time. There were a few Pakistani flags on show in the march and flags of Islamic Emirate of Afghanistan, i.e., the Afghan Taliban were also spotted [16] in the crowd.

Anas Mallic, a journalist, tweeted pictures of the crowd:

Meet SajidUllah, A supporter of the Islamic Emirate at the #JUIF [17] Jalsa – flags of Islamic Emirates ie the Afghan Taliban can be spotted in abundance the the dharna site. #AzadiMarch [18] pic.twitter.com/DYrSdDmp83 [19]

In his address, Maulana Fazlur Rehman criticized the government and institutions [21] (hinting at the army):

…the marchers don’t want a fight with the institutions, but we want to see them [institutions] as impartial. We are giving you two days to stop backing the government.

In response to this speech, the Director-General of Inter-Services Public Relations (ISPR) Major General Asif Ghafoor released a statement: [22]

JUI-F chief should tell which institutions he was referring to in his speech and should take up his reservations with the concerned institutions as Army is an ‘impartial’ institution.

According to an analysis [23] by Pakistani-American columnist Mohammad Taqi, Maulana Fazlur Rehman is fighting a battle for his political survival with this Azadi March.

JUI-F Chief made all efforts to keep his audience engaged in the Azadi March, he even spewed hatred against Israel, India, and also the Qadiani [24] or the Ahmadiyya Muslim [25] community.

Clearest articulation of “procedural democracy”, where MFR is congratulating protestors for thwarting an imaginary conspiracy by Israel, “Qadiyanis” to take over Pakistan using Imran Khan

The damage such bigoted rhetoric is doing to our society cannot be overstated #AzadiMarch [18] pic.twitter.com/Kl27Zug2ZO [26]

Twitter users also condemned opposition Pakistan Peoples Party (PPP) Chairman Bilawal Bhutto Zardari [28] for standing next to JUI-F Chief on stage when he spoke against the minority Ahmadiyya Muslim community. The PPP, known for standing by minority groups and with Asia Bibi [29] in the blasphemy case against her, was criticised for remaining silent during the march.

Same Asia Bibi, Salman Taseer gave his life for & same Ahmadis, he bravely visited after Lhr attack.
Dark day for this so called liberal party.
Politics can't get more dirtier than this. pic.twitter.com/xByjWzhOR5 [30]

During the Azadi March, there were also partial internet shutdowns [32]. According to Digital Rights Monitor [33], Mobile data services were suspended in parts of Islamabad, Punjab and Khyber Pakhtunkhwa to restrict live streaming of the ‘Azadi March’.

Senior Journalist Mutraza Solangi tweeted a screen-shot of the message he had received regarding the internet shut down:

Mobile Internet was deactivated to stop the live streaming of Maulana Fazul Rehman’s Azadi March while all TV channels were forced to observe blanket media black out. Remember Imran Khan claiming that media in Pakistan is fewer than UK? pic.twitter.com/C7dK2SmZnW [34]

Apart from internet shutdowns, members of the Ansar Ul Islam group also restricted journalists from covering the march at the venue.

Translation: Freedom of Speech is everyone's basic human right but in Azadi March people are not allowed to talk.

A few female journalists also faced resistance [39] when they tried to march.

Our two journalists Shifa Yousufzi & Annie shirazi we’re barred from covering JUI-F rally because they were ‘women’ and weren’t allowed to enter the venue. Seriously…cause they were women? What a shame and what a silly way to misrepresent Islamic teachings. Shameful indeed!

Thread from Maulana March: Went to the ground, only men could be seen in the ground for yards and yards. It felt very awkward and uncomfortable to be stared at some kind of alien still my team went ahead with me covering the march. So we went towards the ground. #Azadi_March [41]

According to the reasons given by the JUI-F party, women were not taking part in the dharna because they were at home fasting and praying for their male family member’s wellbeing.

This is probably the most twisted logic you'd come across

Ansarul Islam workers tell @NayaDaurpk [43], #women [44] aren't allowed at #AzadiMarch [18] as their job is to sit home and pray for their male counterparts, even if they support Maulana's cause

Earlier JUI-F chief Maulana Fazlur Rehman had informed the Pakistan Muslim League-Nawaz (PML-N) about the non-participation of women [47] in the upcoming Islamabad sit-in as it was un-Islamic in their way of thinking for women to participate in such activities.

What does Maulana Fazlur Rahman think? He can become Prime Minister by having a dharna in Islamabad, playing the religion card, threatening violence, exploiting the ahmadi issue, courting the army's support and asking for the PM's resignation? Who does he think he is? Imran Khan?