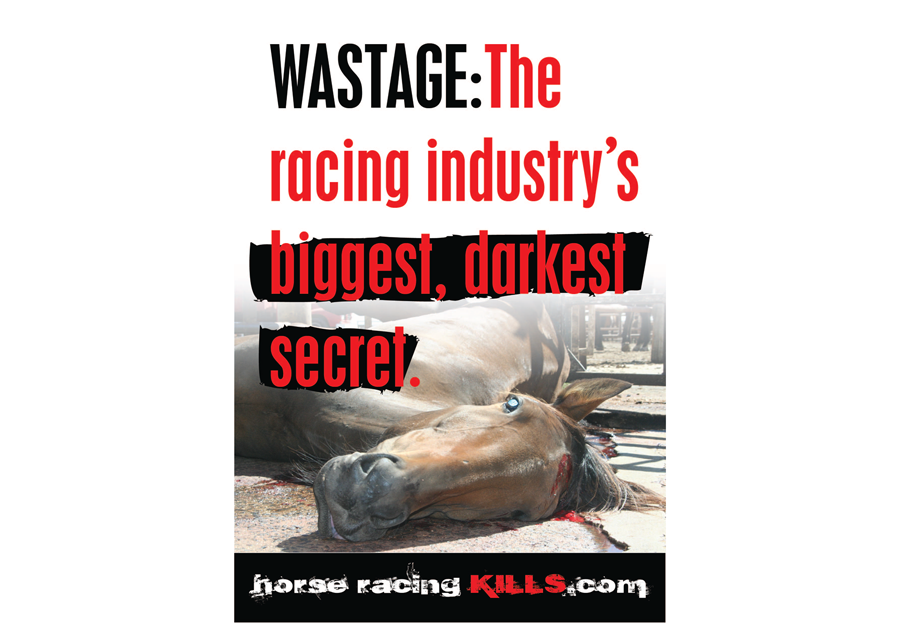 Campaign poster. Courtesy of Coalition for the Protection of Racehorses.

The Final Race: The dark side of the horse racing industry exposed disturbing details about the disposal of retired thoroughbreds for food for human consumption. It showed video footage of so-called ‘wastage’ of those horses that were no longer required. It showed their slaughter in an abattoir with animals being beaten, given electric shocks and “trapped and trampled’. It claimed that up to 4000 horses disappear each year, a figure that has been disputed by racing authorities such as Racing Victoria.

Many viewers found the segment extremely distressing. This reaction to a short Facebook version echoed their feelings:

Peter Gill: I was going to go to the Melbourne cup this year the first time in 67 years I've just canceled I couldn't support such a horrible industry

A number of related issues have been highlighted in the wake of the scandal. Injuries and deaths related to the running of the Cup have been an ongoing concern. The on course putting down of horses with broken bones has focused public attention on this side of the race and horse racing in general.

Calls to end the use of whips by jockeys during races have multiplied, with many expecting the practice to be banned in the near future:

It may never be the case though that people across the country and around the world, view this as the brutal sport that it is, simply because there is too much money, fun and entertainment involved.

The Coalition for the Protection of Racehorses suggested ways to take action including alternative events for the day and joining protests. There were protests at race meetings and during the Cup parade. Some tweets believed the negative media was having a real effect:

I have worked across the road from a pub for the last 10 years. Every #MelbourneCup day it’s mayhem, people queued outside to place bets from very early. This year not even a handful of people inside putting bets on. #NupToTheCup

Their twitter hashtag #NupToTheCup jockeyed for popularity throughout the day occasionally nosing in front of #MelbourneCup2019. These contrasting tweets show the opposing views very clearly:

I ❤ the #MelbourneCup2019 . Best time of the year. Great races , great stories. From the hard working #strappers to the #trainers you work hard for a living. It’s been a tough year but if only people knew how much you care about the horses you look after. #longlivehorseracing pic.twitter.com/FKG3EKXBLw

Traditionally, Cup Day stops the nation with much of the State of Victoria taking a public holiday and even Federal parliament adjourning to watch the race when it's sitting. This year attendance on course was 81,408, the lowest in 24 years despite sunny, dry weather. The record is 2003 with 122,736. The national TV audience was also much lower than recent years.

Gambling has also been affected with nationwide betting turnover reported to be nearly 6% lower than in 2018.

The race result itself was a public relations plus for Cup organisers. The winner, Vow and Declare, is the first local since 2009. It is a local horse with an Australian trainer, jockey and owners. At this stage, only one serious injury has been reported, with Rostropovich sustaining a pelvic fracture. He is expected to recover.

One netizen has some advice for those who might be troubled by this:

If you won money on the last placed Rostropovich, in an office sweep, consider donating it to an animal welfare charity. #MelbourneCup2019 #MelbCupCarnival

The controversy will no doubt reignite next racing spring carnival.