Lack of respect or 'crossthreading of value systems'? 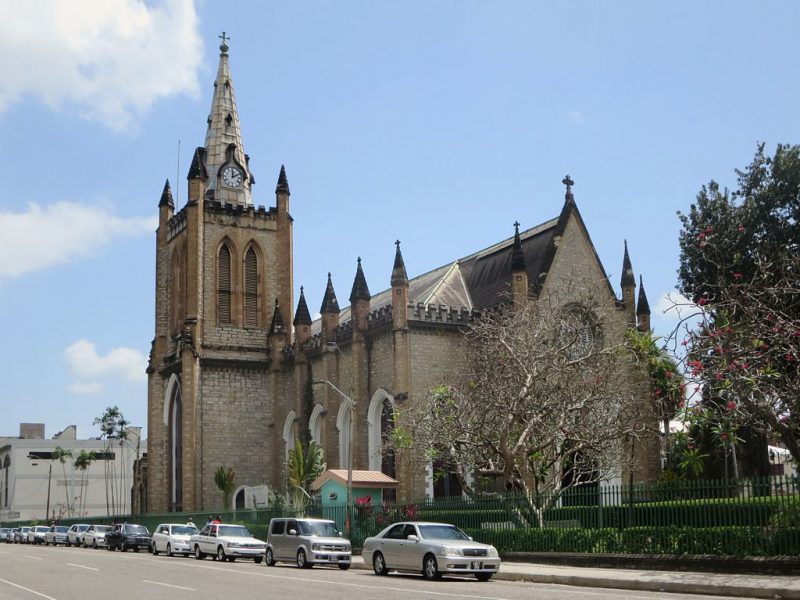 The Holy Trinity Anglican Cathedral in Port of Spain, Trinidad, neo-gothic in architectural style. Photo by David Stanley, CC BY 2.0.

On the evening of November 2, 2019, a fashion show was held at the Holy Trinity Cathedral in Trinidad's capital, Port of Spain — but once the scantily clad models turned the church aisles into a catwalk, what began as an effort to help raise funds for repairs to the nearly 200-year-old landmark after it was damaged during the country's 2018 earthquake, ended in heated discussions over respect — and respectability politics.

Churches and fashion may be less of an oxymoron than you think. Like most Caribbean countries, Trinidad and Tobago is heavily religious, and churches often act as community gathering places to host a range of events that go well beyond traditional religious services.

Last year, for instance, the Carnival band K2K Alliance and Partners produced a visually stunning portrayal called “Through Stained Glass Windows”. The launch of the band's presentation took place at the All Saints Anglican Church, a smaller chapel bordering the city's main green space, and it was a tremendous success, with a portion of the proceeds going toward the church restorations. 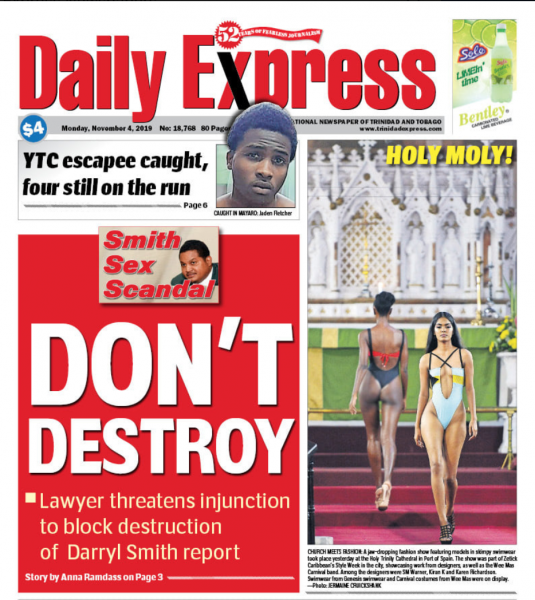 A screenshot of the front page of the Daily Express, dated November 4, 2019, which highlights some of the swimwear on display.

It seemed a solid fundraising model: repurpose a beautiful public space for a good cause, attract an audience that can pay a premium for the performance, and put the proceeds toward maintaining the architectural integrity of the church. There was just one problem — church officials who approved the event did not anticipate that the organisers would sanction the kind of outfits and swimwear on display.

In a statement posted to the cathedral's Facebook page, Anglican bishop Claude Berkley apologised for “the misuse of the consecrated space within the Holy Trinity Cathedral, at a recently hosted fashion show”:

The depiction of scantily clad models parading along the aisle of the Church offended individual and collective sensibilities locally and internationally. […] Such a parade is completely out of order, inappropriate and it is strongly condemned. Our church has hosted fashion shows in the past and we have never come to this sad deterioration of respect and modesty. I am reliably informed that firm guidelines were in effect with the primary organizer, but that there was a deviation from the agreed guidelines. At the first sight of this deviation, the show should have been shut down. […]

Even though the church might promote the positive aspects of the culture in which it witnesses, due care must be taken to ensure that participants do not cross the line into negativity and impropriety.

Although the event's spokespeople praised the Anglican church for its progressiveness and lashed out at critics by suggesting those who took offence were “hy­per­sen­si­tive”, Christopher Nathan, the original creator of Style Week, quickly apologised, explaining that while he respected the need for artistic freedom, revealing looks should have been adjusted or omitted, given the location. 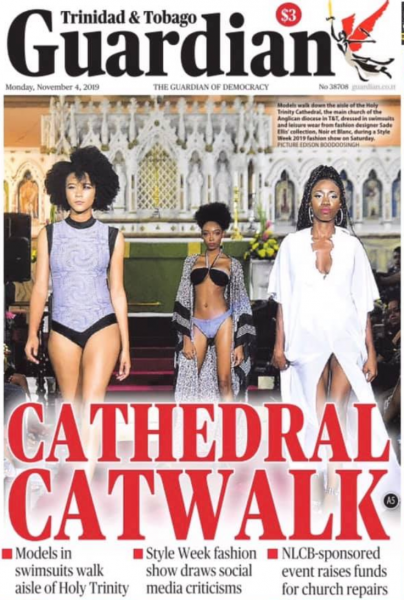 A screenshot of the front page of the Trinidad & Tobago Guardian, dated November 4, 2019, depicting some of the swimwear on display.

While most social media users were outraged at what they deemed disrespectful and inappropriate, the discussion also veered toward other issues.

A lot of time was spent apportioning blame — first to the designer, who some felt was going for “shock value”, then to the church itself for granting permission; others felt the media was just as complicit by splashing the images all over the front page.

Terms like “horror”, “blasphemy” and “last days” were bandied about, prompting some social media users to raise the issue of pedophilia [in the Catholic church], saying this fashion show “pales in comparison”.

Facebook user Jude Persad suggested the display was a commentary on the wider Carnival culture:

If they could jump carnival almost naked and go for ashes they could walk practically naked in the church.

Trinidad and Tobago's annual Carnival celebrations — a hallmark of which is a colourful array of barely-there costumes — take place each year on the Monday and Tuesday before Ash Wednesday, which marks the start of the Lenten season. On Ash Wednesday, Christians, many of whom would have participated in the national festival, attend mass to receive ashes.

Prior to Bishop Berkley's statement, some online commenters attempted to explain what happened by pointing out differences between the Anglican and Roman Catholic faiths:

‘The Catholic Church acknowledges the presence of Christ at the altar while the Anglican Church doesn’t. Therefore the Anglican Church wouldn’t have an issue hosting a fashion show in the actual church building. There are actually a series of secular concerts in an Anglican Church in the UK (the home of the Church) this Christmas.’ [Original source of quotation unclear.]

Interestingly, Clifford Rawlins, a minister in the Pentecostal faith, weighed in on Facebook:

Christianity in T&T is influenced by Hinduism and Islam and many a time the value systems of all three religions crossthread and the generally ignorant and undiscerning public can hardly make out any differences and often assume that all religions preach the same things about dress and morals etc. […] As the Guardian newspaper article quoted the fashion house in question, no one need be ashamed of the human body which is created in the image of God. Our ideas from Islam and Hinduism are that it should be covered up to prevent the ‘sin’ of lust and the all-dreaded sexual activity, and that it is a thing to be ashamed of, stemming too from Jewish thought. If people can wear swimsuits at the beach and, the whole Earth is the Lord's where nothing is hidden from him, then why not in a human-made church building used for a secular purpose? […]

We ought not look at one through the eyes and lenses of another […] things can become too confused in the crossthreading of value systems and many get lost in the all too ready hurl of social media obsecrations and deprecations.

No sooner had the media got hold of Rawlins’ interpretation of the controversy than the Presbyterian Church of Trinidad and Tobago (PCTT) issued a statement distancing itself from his comments:

The said ‘Reverend Rawlins’ is not a PCTT Minister and has no authority to speak on the PCTT’s behalf. […]
The PCTT respects the sanctity of places of worship.

Quite apart from the religious discussion, however, the incident has raised questions about the idea of public spaces, how they might be adapted for different purposes and how such flexibility should be managed.