"Should we turn a blind eye to these abuses?" 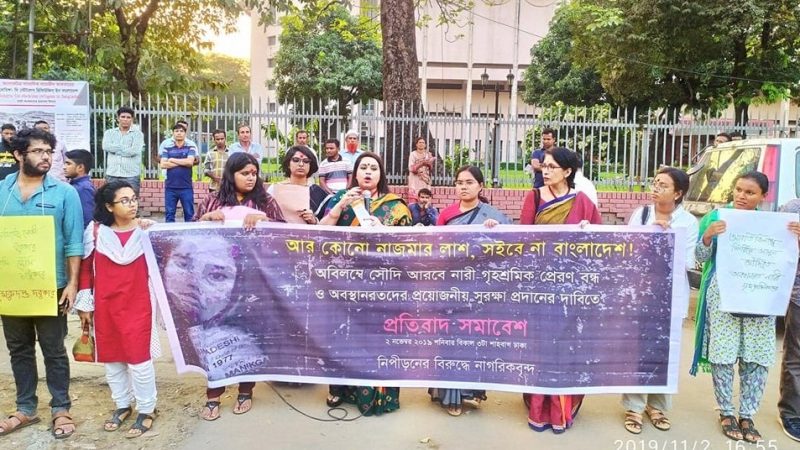 A human chain in Dhaka to protest the torture of Bangladeshi female domestic workers in Saudi Arabia. Photo by Ekramul Haque. Used with permission.

It's not just the physical, mental or sexual abuse cases. More than 100 Bangladeshi maids have died in the Middle East during the first nine months of 2019 — including 36 who committed suicide.

In the past few years, a lot of online videos have surfaced telling tales of abuse towards these domestic workers.

Recently, a video went viral of a Bangladeshi maid in Saudi Arabia making a desperate plea to be taken home while hiding from her abusers inside a toilet.

25-year-old Sumi Akter said that she was physically and sexually assaulted by her employers, who had poured hot oil on her arms. She had been held captive for 15 days and barely had any food.

After returning to Bangladesh, another female migrant described that she was treated like a slave:

[…] After arriving in Saudi Arabia, I was first sold to a landlord. I escaped from that house after a lot of domestic abuse. Then they caught me and resold me to a company at 6 lakh Bangladeshi Taka (USD 7,000). I know that there are a few hundred more girls like me out there who are forced to prostitution. I managed to call home to my husband once and told him everything. Then he contacted the Bangladesh Embassy in Saudi Arabia and finally, I was rescued.

BRAC is known as the is the largest non-governmental development organisation in the world, which also works with the migrant workers in Bangladesh. They published a short film about female Bangladeshi migrant workers in Saudi Arabia which narrates the abuse many face:

The only recourse for this abuse is to report to the police which is a challenge due to language issues. In addition, as per the Ambassador of Bangladesh in Saudi Arabia, many victims become so traumatized that they want to return home quickly and many don't stay longer for the litigation process. So more often than not, action isn't taken against the abuser. According to the Bangladeshi ambassador, the Saudi Arabian government has been informed of these cases.

Since the 1970s, a large number of Bangladeshi male migrant workers have traveled to Saudi Arabia in search of work. However, despite the history of females joining the Bangladeshi migrant workforce being much shorter, today their numbers are substantial. Since 2015, there are more than 200,000 Bangladeshi housemaids in Saudi Arabia.

Cases of corporal abuse against members of the estimated 9 million migrant worker population in Saudi Arabia have caught public attention over the years. Earlier, Indonesia and the Philippines were the main sources of female domestic workers in Saudi Arabia. But, in 2015, citing cases of abuse and torture, Indonesia banned sending female workers to Saudi Arabia. Sri Lanka and the Philippines had stopped sending female workers earlier than that. The Saudi labour market had been closed to Bangladesh since 2008; however, in 2015, Saudi Arabia offered to hire workers from Bangladesh with a 2:1 male-female ratio. The Bangladeshi government agreed to the proposal and an official base salary of 800 Saudi Arabian Riyals (US$ 213) per month for female workers was set — much less than what the Filipinos or the Indonesians were getting.

A Saudi Gazette report stated that housemaids from Bangladesh were the most in-demand in Saudi Arabia as their recruitment was the cheapest.

There has been a lot of debate in the country after the rise of female workers returning to Bangladesh. Columnist Syed Ishtiaq Reza condemns sending women to Saudi Arabia in the name of boosting the economy:

The country's economy is indeed enriched by exporting manpower abroad. The economy of Bangladesh depends heavily on these foreign currency earnings. But the question is, should we continue to turn a blind eye to these abuses for the sake of the adverse impact on our economy it can bring? My question to the nation – What are the legal rights of these abused female workers? What platform they can lean on to defend themselves and their rights and finally get justice?

On 31 October the dead-body of female domestic worker Parvin Akter was flown back to Bangladesh from Saudi Arabia. Her death certificate mentioned “suicide”. But her family members don't buy this. They say that she many times complained of abuses in her workplace.

I wish no more female worker would go to Saudi Arabia, ever. ??

Dr. M R Karim Reza asked the government why they are not doing enough to change the situation:

Why the government is not taking steps to stop sending female domestic workers to barbaric Saudi Arabia?

According to Selim Reza, secretary of the Expatriates’ Welfare Ministry, the Bangladeshi government has set up safe houses in Saudi Arabia for abused women and has taken steps to blacklist and sue “bad employers”.

Amidst all this, Bangladesh is not ready to stop the manpower export to Saudi Arabia said it's foreign minister. Journalist Ishrat Jahan Urmi wrote on Facebook:

## [..] Today, the Foreign Minister mentioned that thousands of workers are going to Saudi Arabia. He asked – “How many have complained that we should stop the market? What is the percentage?”

## The dead bodies that have returned had death certificates mentioning the cause of death as “suicide” or “heart attack”. The investigation stops there. The Saudi nationals are above law.

## A Saudi landlord has to pay expenses and fees of 170,000 BDT (USD 2,000) to get a Bangladeshi maid. They deem that they have bought a slave and can do anything with her.

## Many sexually abused workers return home only to find that her family doesn't want her back (stigma against raped women). This year the BRAC safe home program helped around 1300 female returnees.

## Above all we have our privileged society. [..] They think that these poor women are greedy and they go abroad for anything. These people are plenty in this society.

Against all these odds, we want that the export of female workers to Saudi Arabia be stopped. I don't know whether this cry would be heard by many. But what more can we do?