A divided Bolivia in crisis: Sources that can help you understand the conflict 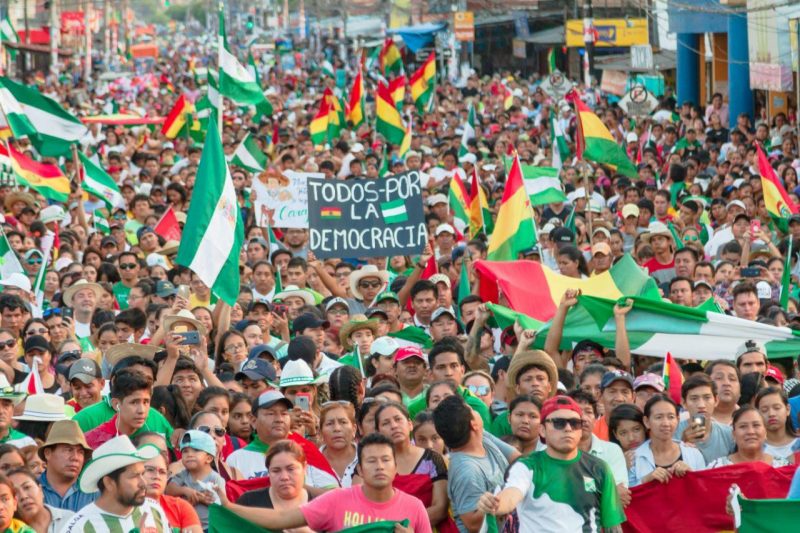 Following the presidential elections on October 20, 2019, intense protests in Bolivia — some involving civic strikes and blockades of roads in major cities — have generated much uncertainty. The protests have also resulted in violent clashes between supporters of incumbent President Evo Morales’ Movement for Socialism (MAS) party and citizens mobilized by the annulment of the presidential elections and suspected fraud to defend their voting rights.

On the night of October 20, with the preliminary vote count showing Morales with a narrow lead over Civic Community's (CC) Carlos Mesa, the transmission of vote count announcements was abruptly suspended for more than 20 hours. When the announcements resumed the next day, in what the Organization of American States (OAS) called an “inexplicable” shift, the results showed Morales clearly in the lead.

On October 24, Morales declared victory, after a vote count that showed him to have received 46.83 per cent of the vote to Mesa's 36.7 per cent—slightly greater than a 10-point lead—thus avoiding a runoff election. Mesa rejected the result, and five senior members of the Plurinational Electoral Body (EPO) resigned in protest, following about 30 others who had resigned before the elections. After analyzing publicly available electoral data from the EPO, a group of computer professionals led by systems engineer Edgar Villegas presented evidence in the press alleging electoral fraud.

The electoral audit initiated by the OAS on October 31 was accepted by Morales’ administration, but not by Mesa, who demanded that the election be annulled. He took the opportunity to remind the public that, according to the Political Constitution of the State, and in light of Bolivian citizenry's refusal, in a February 2016 referendum, to agree to modify the constitution, it was, in fact, illegal for Morales to seek a third term in office.

This situation left Bolivian society politically polarized. Protesters in the streets, members of neighborhoods and communities, as well as the leadership of the police and armed forces found themselves divided between allegiance to the government and opposition to the alleged electoral fraud.

For Pablo, one of the people injured in #Cochabamba. He left home on his motorcycle to go to job as a deliveryman and was beaten up by a violent horde of you know who.

With no possibility of reconciliation or dialogue in sight, the leaders of both sides have staunchly maintained their positions and have made use of state support to bolster them. Morales has sought the backing of his peasant base, who are escorted by police to blockade points and protected by them in clashes, and are allowed to use explosives prohibited by law in demonstrations. The opposition, on the other hand, has said that it will only end civic strikes and mobilizations when the elections are annulled, and it has the support of departmental and municipal authorities of the city of Santa Cruz that have arranged shared pots of food for the protestors.

To understand the complexity and keep abreast of the situation in Bolivia, here is a list of Spanish-language media outlets and social media accounts we suggest you follow:

LaPublicaBO — the independent news outlet La Pública has been organizing Google Hangouts each night featuring guests who share their perspectives on the current conflict.

MuyWaso — this feminist collective has been disseminating information and announcements.

The articulation of feminisms in Bolivia is taking shape and adding voices. From our base in Santa Cruz, we present the manifesto of the Feminist and Diverse Assembly, the result of a long collective deliberation.
Feminist hope!

InfoTarija — media outlet based in the city of Tarija specialising in coverage from the south of Bolivia.

Chris Eguez — feminist trans activist providing analysis of the role of women and of social diversity from a historical perspective.

I do not understand why so many gays feel drawn to the demonstrations under the rubric of the regional-Catholicism of Santa Cruz, considering the macho, racist and homophobic elements that sustain it. As a fag, I prefer to be associating with feminists, resisting dissent.

María Galindo — Bolivia-born Latin American feminist icon. Her movement has attracted feminists and others who do not see themselves represented at the extremes of confrontation in Santa Cruz and Cochabamba. She has a radio program (also broadcast on Facebook) entitled “Don't Kill Us for a Chair.”

Santiago Espinoza — arts and culture journalist and editor in chief of the Sunday magazine La Ramona.

For news and fact-checking:

Chequea Bolivia and Bolivia Verifica are two verification platforms launched before the elections, and now working to verify messages, images, and rumors being shared on social networks and messaging apps.

Los Tiempos — this Cochabamba newspaper has been documenting and sharing on its social media accounts mobile phone videos of the unrest in the streets.

#StrikeInBolivia In Cochabamba hundreds of people have converged upon September 14 Square where a council is being held in the context of the ninth day of the strike in #Bolivia against the controversial vote count in the general elections.

El Deber — the country's largest newspaper covers not only the city of Santa Cruz, but also publishes national and regional news.

María Silva Trigo – this online journalist from El Deber shares eyewitness news as she roves around Santa Cruz as the city is paralyzed by blockades.

The other day I ran into a cheese producer whose vehicle was full of fresh cheese for delivery. He gave me a basket to put on my lap because there was no room. At one roadblock the people had asked for some cheese in exchange for letting him pass.

Tuffí Aré — the former journalistic corporate head of the newspaper El Deber is a reliable source of information shared through his social media accounts.