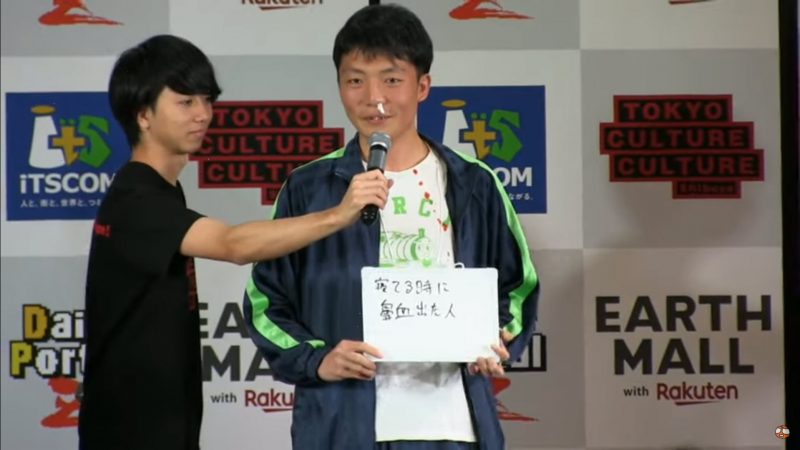 “Man awakened at 3AM by a nosebleed” costume, part of Japan's annual Mundane Halloween event. Screencap from YouTube.

Since 2017, an event called “Mundane Halloween” ( 地味ハロウィン, “sober”, “plain”, “boring” or “mundane” Halloween) has become an October tradition in Japan. Participants dress up in plain outfits that are intended to be the drolly humorous antithesis of the often elaborate or cliched costumes everyone else wears on Halloween.

This year, Mundane Halloween took place on Sunday, October 27 in Tokyo. The gathering was hosted by Rakuten, the popular online shopping portal, and live-streamed on YouTube. Images of the costumes were almost immediately shared by thousands of people on Twitter, using the hashtag (#地味ハロウィン, Jimi Halloween), and the Japanese website Daily Portal published many of the best ones. Many of the costumes parodied current trends, such as tapioca tea, which underwent a boom all over Japan earlier this summer.

Mundane Halloween has begun! This year I'm going as an Instagrammer who doesn't know how to drink tapioca tea.

Many of the costumes incorporated drily witty conceptual humour.

Halloween night in Tokyo has become contentious in recent years, as massive drunken crowds have sown mayhem in Shibuya, a popular gathering space. One costume referenced the troubles caused by some Halloween revellers in 2018.

Mundane or sober Halloween also seems to be spreading outside of Japan. Twitter user @cheryll has posted a number of great photos, including this one:

We did a small version of Japan's Sober/Simple Halloween yesterday, here's “Guy Who Refuses to Take More than One Trip from the Car” #地味ハロウィン pic.twitter.com/AC7buqSSQH

More Japanese mundane Halloween costumes from 2019 and past years can be seen on the Twitter account of Mulboyne, a prolific blogger in Japan, and on Kotaku.