A group of Angolan reporters and cameramen await former US Secretary of State John Kerry as he tours a General Electric facility in the Sonils compound in the Port of Luanda, May 4, 2014. Photo by US State Department, public domain.

This story is the first in a two-part series on limited reforms introduced under João Lourenço (JLO) that affect media freedom and activism in Angola. You can read the second [2] part here.

Rafael Marques de Morais is a prominent Angolan journalist, anti-corruption activist and long-time government critic. Under the regime of president José Eduardo dos Santos (“JES”), who ruled Angola from 1979 to 2017, Marques was continuously harassed by the authorities for his work. While working at government-owned Jornal de Angola in the 1990s, he faced pressure for “injecting [3] unwelcome social commentary.”

It wasn't until João Lourenço [4] (“JLO”) succeeded JES in 2017 that journalists like de Morais began to see political reforms that helped improve the environment for media and press freedoms. These reforms, however, mainly tackled corruption. While media freedoms have apparently improved, limits from the former regime persist.

In 1999, he wrote, “The Lipstick of the Dictatorship” (“O ‘Bâton’ da Ditadura” [8]), an article [9] criticizing corruption and the devastating war, and was then detained [10] on charges of defaming the president. Appalling [3] detention conditions and abuses such as sleep deprivation pushed him to stage a hunger strike, which gained international support. He was released after 40 days, but then received a six-month suspended sentence and a fine.

In 2015, Marques faced prosecution for defamation, for writing the 2011 book “Blood Diamonds: Corruption and Torture in Angola, [11]“ published in Portugal, later released online. It documents in detail rights violations relating to mining operations. All charges were eventually dropped [12].

He was also put under surveillance. In 2013, he discovered [13] that his computer [14] was bugged [15] by malware “which international experts linked to a multinational with strong ties to Angolan military officials.” The news and anti-corruption website he launched, called Maka Angola — “Maka, [16]” in Kimbundu language, “refers to “a delicate, complex or serious problem”, i.e. corruption and poverty — faced [5] numerous cyberattacks, such as denial of service attacks. 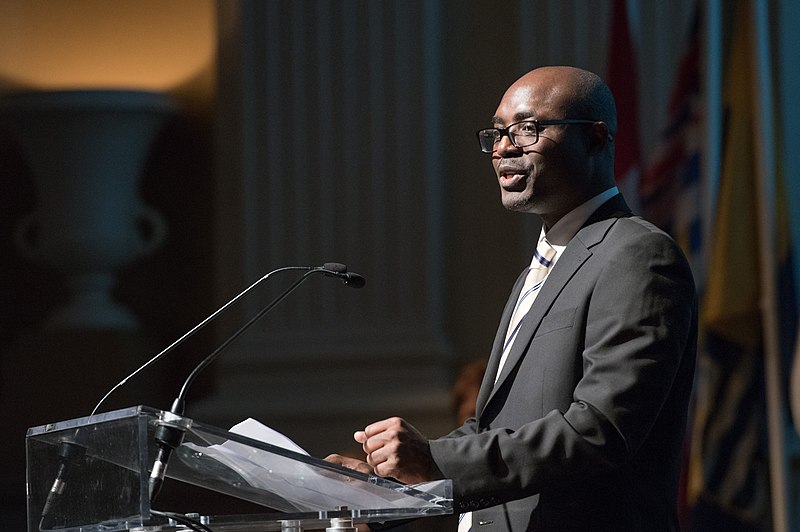 Rafael Marques de Morais, co-recipient of the Allard Prize, speaks at the 2015 ceremony, October 1, 2015. Photo by Martin Dee, used with permission via Wikimedia Commons, CC BY 4.0.

Today, Marques and other independent journalists are able to work more freely, thanks to an improvement in the political and media freedom environments under JLO, but limits remain.

MPLA dominance under the former regime

Under JES’s rule, internet access gradually increased, although it remained [42] low — measured by Internet World Stats as 22.3 percent of the population in 2019 [43], hindering the reach of online spaces. However, as online activism and information became more dynamic, JES’ government began to clamp down on dissent.

Back in 2016, journalist Manuel Serrano wrote that the internet became a “last frontier” [44] for political discussion, dissidence and denouncing corruption, given reporting and demonstrating restrictions.

Under JES, prosecutions of activists and journalists were also common.

A well-known case was the “15+2” group of activists, who in 2015 were arrested [45], charged with planning a coup, for meeting to discuss the book, “From Dictatorship to Democracy: A Conceptual Framework for Liberation.” This included activist [46]-musician [47] Luaty Beirão [48], who is influential on social media [49].

Several protested by hunger strike [50] which drew international attention — echoed on social media — and pressured authorities to eventually drop [51] charges. It showed the potential reach and limits of online activism and contributed [52] to the pressure, but the issue later faded from prominence.

The regime also made use of restrictive laws that allowed it to silence critics and those who question the ruling elite’s conduct. The 2010 [53] state security law  [14] “penalizes individuals who insult the country or president in “public meetings or by disseminating” information with prison sentences, and the 2006 press law [54] holds journalists “criminally liable for libelous content.”

Restrictive press laws, imported surveillance [14] technology, and the practice of arrests and court cases, were all tactics the JES regime deployed to restrict press and media freedoms.

Marques acknowledged [56] that freedom of expression improved under JLO, noting telling the Financial Times earlier this year that surveillance [57] equipment [58] at his home had gone. In mid-2018, Marques and editor Mariano Brás were acquitted [59] of charges of insulting the state for a 2016 online article [60] accusing an attorney-general of corruption. The judge said they fulfilled [61] their journalistic duty and Human Rights Watch researcher Zenaida Machado called it a “huge victory for press freedom”. RSF improved Angola’s press freedom ranking [62] by 12 places in 2019 and said access to state-held information had improved [30].

Some judges have ruled in favor of demonstrators arrested by police [63], defending their constitutional right [64] to protest and several soldiers recently received jail-time [65] for lethally firing on protestors in 2016. Amnesty International [66] noted that authorities “allowed peaceful demonstrations”, although criticized “new cases of human rights violations and excessive use of force by security forces” and continued unaccountability.

Frontline Defenders [12] said the “culture of repressing [human rights defenders]  (…) continued, albeit at a reduced level, under the new administration,” also referencing judicial and security services restrictions, and targeting of independence activists from the oil-rich Cabinda [67] province.

Between mid-2017 and mid-2018, Freedom House ranked [14] Angola’s internet as “partly free” and reported [14] that ”online content remained uncensored and unrestricted” although online bots were influential on social media, notably around the 2017 elections.

The tools for media restrictions remain and clamp-downs on sensitive topics have occurred. For example [68], dozens of people connected to Cabinda province’s independence movement were arrested, but  [69]judges later ordered their release.

Recent [70] protests mobilized on social media against high unemployment and poverty recall JLO’s promises of job-creation in his election campaign and seven activists [71] filed a legal complaint against Luanda – the capital city – police for abuses at a march.

JLO has reiterated his intention to continue anti-corruption efforts but said [72] not everybody supported it and that corrupt people were using misappropriated money to fund destabilization, referring to the ongoing protests. [70] Musician Luaty Beirão criticized [73] the rhetoric for being “just like” those of the past.

JLO's political reforms have loosened restrictions, but haven't done much to actively advance an open internet in Angola. The legal and practical tools to restrict media remain. Citizens continue to grapple with low internet access, legislation [30] on defamation and controlled content and continued impunity [74] for past [75] and current violence.