Cry of ‘Free the [bleeping] weed!’ leads to arrest of Trinidadian cannabis advocate

Decriminalisation? 'Port of Spain will [answer] with a solid yes' 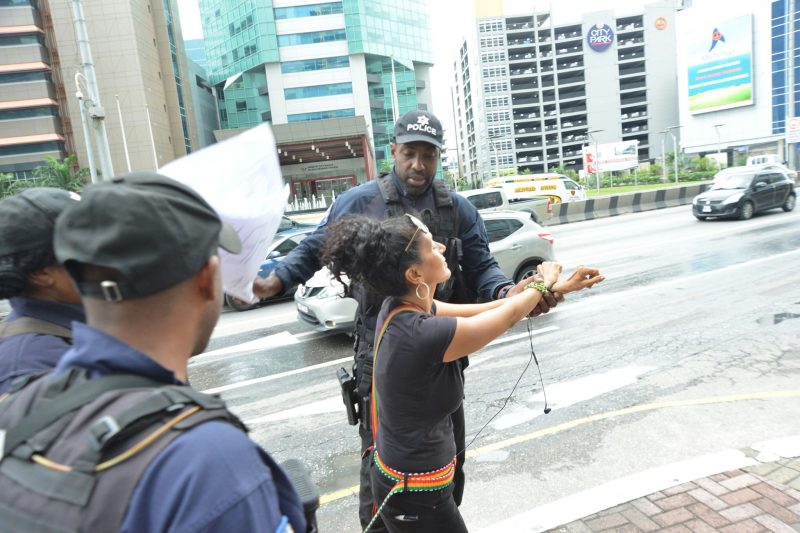 Activist Nazma Muller is led away by police officers in front of Trinidad and Tobago's parliament on October 18, 2019. Photo courtesy of Nazma Muller.

On October 18, 2019, activist Nazma Muller stood on the pavement outside Trinidad and Tobago's parliament to continue to press the government to enact existing medical marijuana legislation.

In a Facebook post that morning, she announced that she would be “outside Parliament from noon to 3 pm reminding the prime minister of his promise to decriminalise cannabis and make it available for personal and medical use by June 30 of this year.”

Muller has vowed to “be there every Friday until he keeps his promise” — but on this particular Friday, the police arrested her under Section 49 of the country's Summary Offences Act, which deals with “violent language and breach of the peace” — a law which some view as counterintuitive to the freedom of expression that is enshrined in the Constitution.

Jurist and lecturer Jamille Broome, for instance, believes the law to be “very oppressive” and thinks “the only limit on obscene language should be when it incites or has the potential to incite violence.”

Anyone arrested under this law faces a fine of $200 Trinidad and Tobago dollars (approximately $30 United States dollars) or 30 days’ imprisonment.

Images posted on Muller's Facebook page show her being led away by a police officer, who also took away her sign reading, “Honk your horn for the herb.”

Dr. Nazma Muller has been detained while protesting to “Free de Ganja”. Officers advised she will we taken to CPS to be charged and processed. Please share so people can see the real threats to our democracy.
#FreeTheWeed #LegalizeIt #DemocracyWhere

In the thread that followed, Samlal said that when the police officers approached, “they said we were ‘inciting others to disrupt parliament’.” While some commenters felt the police were simply doing their job, Imtiaz Rudy Mohammed asked:

I thought parliament was inside of a building, was she trying to breach the building? Was she found with an IED [improvised explosive device] on her person? Was she in any way harming anyone or influencing harming to anyone in parliament? If all these answers are a no then she is being abused by the police. […] Free the lady let her do her civil duty.

Muller was released from police custody at around 7:30 that evening. At her October 21 hearing, she pleaded “not guilty” to the charge and the matter was adjourned to November 13, 2019.

Speaking with Global Voices by phone, Muller said that she had retained Dr. Emir Crowne, Matthew Gayle and Jason Jones from New City Chambers as her attorneys and was not at liberty to discuss the details of the case. She did confirm, though, that the charge against her was “the use of obscene language to the annoyance of people in the street”. However, photos of the area outside parliament on the day in question do not capture any bystanders.

Via WhatsApp, Dr. Crowne told Global Voices that “there are serious constitutional implications in this matter”:

Describing the process of arrest and detainment as “traumatic”, Muller said she is nevertheless emboldened to continue her fight for justice. Although the draft cannabis legislation is reportedly ready and simply needs to be laid in parliament, she says neither she nor any of the other stakeholders she has spoken to have been invited to offer feedback to help ensure its smooth passage.

The country's president has also turned down Muller's request to intervene in the medical marijuana issue.

The day after her hearing, Muller found herself at the prison located in the capital, Port of Spain — not as an inmate, but as an advocate. She shared her experience on Facebook:

To those who say the war is over, Rowley has promised to decriminalise, tell that to the citizens of this country who are packed 15 man to one stinking cell […]
I had the honour of coaching the debating team, the defending champions, to prepare for the annual prisons debate final in Woodford Square on November 13.
The question is: Should marijuana be decriminalised in Trinidad and Tobago? And Port of Spain will be answering with a very solid yes.
Until Keith Rowley brings the legislation to Parliament, marijuana is still illegal. And the police are still arresting and charging mostly young, working-class men for possession of marijuana, and sending them to the already overcrowded prison if they can't make bail.
How you think those men feel when they come out…?

To Muller, the question of cannabis decriminalisation and legalisation goes much further than medical needs, religious freedom (she is a Rastafarian) or even the right to personal use of the herb — it is intrinsically tied to many of the social ills the country faces, and to her, “freeing it” can offer much-needed relief — right across the board.

Muller will be protesting outside parliament again today, Friday October 25, and has support from Daniel Junior Sawic George — a father who staged a protest walk of his own to decriminalise cannabis because he believes medical marijuana can help his two sick daughters.