A mud volcano might explode in Trinidad: Are villagers prepared?

Volunteers are training to improve the village's knowledge and response 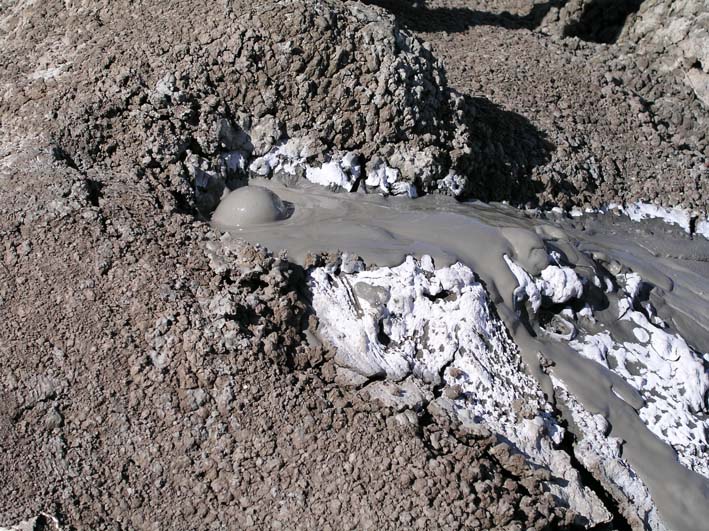 Mud bubbles out of the Piparo mud volcano in central Trinidad in November 2006. Photo by Jennie Mallela, CC BY-NC 2.0.

The twin-island nation of Trinidad and Tobago lies outside the hurricane zone, but it faces natural disasters caused by heavy rainfall, widespread flooding, earthquakes and even the occasional volcano.

When it comes to national disaster readiness plans, the responsibility usually falls on the shoulders of the Office of Disaster Preparedness and Management (ODPM). But some Piparo villagers sense that not enough has been done to prepare for the worst.

According to the local reports, volcano experts have yet to specify when the mud volcano could potentially erupt — but if and when it does, it wouldn't be the first time.

Mud volcanoes differ from traditional indigenous volcanoes in that during an eruption, it does not produce lava and ashes. Instead, mud volcanoes release gases, methane and smaller quantities of nitrogen and carbon dioxide:

The surprise of that 1997 eruption underscores how imperative a disaster preparedness checklist is in the event of another explosion.

President of the Piparo Village Council, Ryan Ghanny, has put out a call for an emergency response team dedicated to the community in case the mud volcano erupts again. A Facebook update on October 6, 2019, confirmed that volunteers from the area were to undergo training to “improve our village response, inform us of the knowledge that is needed and equip us with the tools in the event of a natural disaster taking place in our community”.

The Ministry of National Security also weighed in on the Piparo mud volcano's activity via a press release. It stated that the ODPM, in conjunction with local government disaster management units, has been in touch with a senior geologist who has conducted tests at the volcano site, as well as drone surveys to produce 3D maps of the area.

In addition, nearby police and fire services are on alert and patrols have increased. The site is currently off-limits to both vehicular and pedestrian traffic, as it is considered active.

Despite these measures, however, Ghanny was not satisfied with the preparation efforts.

In late September, a team of disaster officials met with villagers to appraise them of an evacuation plan in the event of a volcanic eruption, and the ODPM's disaster management unit held a training session with community members, but Ghanny insisted there were no resources, equipment, supplies or infrastructure in place to guarantee a systematic and safe evacuation response by agencies. As at September 30, evacuation routes still had not been confirmed.

As the craters continue to widen, however, state agen­cies met with the Village Council on October 17 at the Pi­paro Com­mu­ni­ty Cen­tre. Agencies such as the regional health authority, protective services, the Hous­ing De­vel­op­ment Cor­po­ra­tion, the En­vi­ron­men­tal Man­age­ment Au­thor­i­ty and the Red Cross outlined the resources they would provide in the event of an eruption.

Although the “to­tal evac­u­a­tion plan for the long term” is still being developed based on the re­search that was done by The University of the West Indies, there are plans to do a simulation exercise. Chief Ex­ec­u­tive Of­fi­cer of the ODPM, Ma­jor Gen­er­al (Ret’d) Rod­ney Smart, said he was con­fi­dent in the planned response.

The village of Piparo plans to ring a bell in the mosque and honk vehicle horns to alert villagers should the volcano erupt. Local community groups are also responsible for alerting residents, who have also been advised to develop a family evacuation that supports the community evacuation plan and form a Community Emergency Response Team.

The wider region of Princes Town is home to about 10,000 people, but the number of residents directly surrounding the volcano would be less.