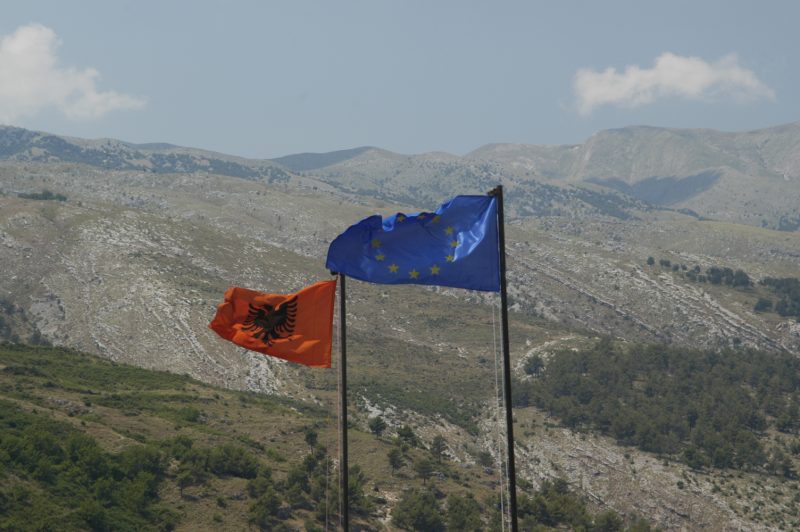 Flags of Albania and the EU in Gjirokastra, Albania photographed in July 2006 by Flickr user Nomad Tales, CC BY-NC-ND.

The European Union (EU) has failed to open accession talks with Albania and North Macedonia in a blow to pro-EU politicians in the small Western Balkan nations.

In meetings that took place over the week ending on October 19, French President Emmanuel Macron led a small number of member states in blocking the launch of membership talks with the two hopeful countries. Macron was joined by Denmark and the Netherlands in refusing Albania but France alone rejected North Macedonia. New membership talks require approval by all EU member states.

The lack of agreement was received negatively not only by politicians and the public in Albania and North Macedonia, but also by bureaucrats in Brussels.

The head of the European Commission, the executive branch of the EU, Jean-Claude Juncker said the EU was making a “major historic mistake”, while EU Council President Donald Tusk stressed that Albania and North Macedonia weren’t at fault.

I would like to send a message to our Macedonian and Albanian friends: don’t give up! You did your share and we didn’t. But I have absolutely no doubt that you will become full members of the European Union.https://t.co/8G5z2NjHPr pic.twitter.com/xgTjKS0HML

Albania is engulfed in a political crisis since February 2019, when an investigation by Voice of America and the Balkan Investigative Reporting Network alleged government officials collaborated with criminal gangs in a vote-buying scheme in the 2017 elections. Opposition MPs renounced their mandates and took to the streets to demand Prime Minister Edi Rama to resign and the creation of a transitional government to oversee fresh parliamentary elections.

Comprised by the Democratic Party and the Socialist Movement for Integration, the opposition has blamed Rama for the EU's failure in starting entry talks. They urged Rama to follow on the steps of North Macedonia, where Prime Minister Zoran Zaev announced snap elections shortly after the EU's decision last week.

PM Rama clarified that accession talks failed because of internal issues in the EU, and not because Albania failed to meet the required conditions. “There will be a series of communications with the French president and the other member countries in order to better understand the progress with this process”, Rama said.

But he also downplayed the consequences of the EU's decision when he said: “As you see, the sun is still shining, the bright day goes on.”

Indeed, Albanians, as well as others in the Western Balkans, weren’t that happy on Twitter:

EU leaders' decision not to open membership talks with Albania ?? and North Macedonia ?? is a fundamental mistake and discouraging for reforms. However, both must remain focused on strengthening the rule of law, fighting corruption and organised crime. https://t.co/8FsbTu6c97

This is the bigest mistake that #EU has made over this years, Albania is a reforming country who more than ever needed this decission to be positive soo they could have an hand over their shoulders to reform in a faster way. #disapointed @JHahnEU https://t.co/AWIiywQUo5

Others were firm in saying that EU integration is “the only path” for Albania.

Albania today need a Pact to Europe, to meet Bundestag conditions and to continue its reforms. Perhaps we will be more ready when the negotiations will be discussed again next year before Zagreb summit, May 2020. EU integration is the only path for ?? #Albania4EU