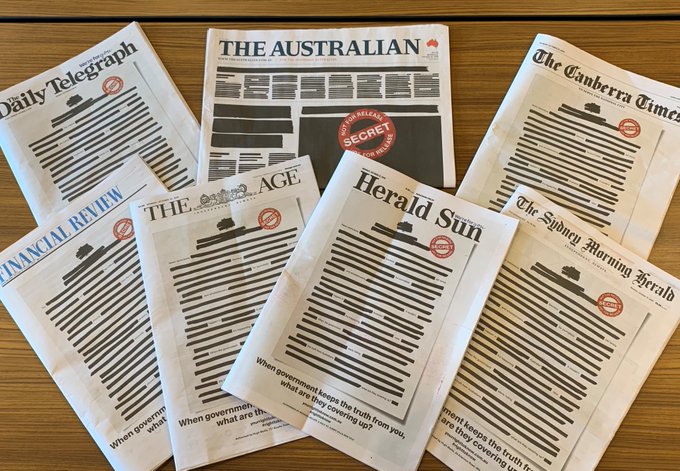 In an unprecedented show of unity, Australian media outlets ran similar stories and redacted front pages featuring the ‘right to know’ campaign in response to government actions that undermine the work of journalists.

The media plays a vital role in telling the public what’s really going on. But journalists and whistleblowers in Australia live in fear of criminal charges, police raids and damaging court battles that threaten their professional careers and personal freedom.

The coalition also asserted that the campaign is not just intended to benefit the media but also the public’s right to know:

Even though our coalition is made up of competing businesses, we still team up to protect Australians’ right to know. We do this because media freedom is critical for holding powerful people accountable and ensuring you know about issues like aged care abuse, secret spying on Australian citizens and mysterious land deals with foreign owners.

According to the coalition’s research, Australian governments have passed around 75 laws related to secrecy, encryption, and spying which are often used to intimidate, prosecute, and arrest journalists.

In the past year, some media offices were raided for publishing classified information. Information requests on some public matters such as elderly abuse, the number of children in adult detention centers, and public surveillance were also denied.

The culture of secrecy that has descended through these legal provisions restricts every Australian’s right to know and goes well beyond the original intent of national security.

Journalism is a fundamental pillar of our democracy. It exists to scrutinise the powerful, shine a light on wrongdoing and hold governments to account to the people, but the Australian public is being kept in the dark about matters that affect them.

It’s clear the national security justification doesn’t tell the whole story of a government’s secrecy obsession when it stops journalists telling you whether your parents or grandparents are at risk in a nursing home or whether the tax office might be raiding your bank accounts.

Australians expect and deserve to know what's going on, and how and why the government decisions that affect their lives are made.

The communities we serve trust us to keep them connected and informed, so ACM is proud to support this campaign to protect the public's right to know.

Some of the demands of the campaign include the call for public sector whistle-blowers protection, enactment of a “properly functioning” freedom of information regime, and the right to contest the application for warrants for journalists and media organizations.

These are some of the Twitter photos shared by journalists in their respective newsrooms:

Took us a while but here we are… Age and Melbourne AFR newsrooms support #PressFreedom and #YourRightToKnow pic.twitter.com/VDErJKzgBE

When you miss out on the group photo but still want to participate lol #PressFreedom #righttoknow pic.twitter.com/P2qeLRW0Gc

When the government keeps the truth from you, what are they covering up? What stories aren't being told? #righttoknow @abcperth pic.twitter.com/JnVeyiMKyv

You have a right to know what govts you elect are doing in your name. But in Australia, whistleblowers are penalised + journalists are raided by police. It needs to change. @ConversationEDU stands with colleagues across the country supporting the @withMEAA #RightToKnow campaign. pic.twitter.com/2jYjN49t7L

Court reporters shared some of the challenges they face when access to information is restricted:

Photographers also participated in the campaign:

After photographing the press gallery members, some of the photographers and camera operators join the group. #YourRightToKnow pic.twitter.com/Fw5aLKvXDM

Even detained asylum-seeker and award-winning writer Behrooz Boochani tweeted his support to the campaign:

Stand up with Australian media for freedom of speech. Some Oz politicians are enemies of democracy & the system itself has a problem if it creates this kind of small dictator. This same dictatorship has been played out in the secrecy about exile of refugees.#righttoknow pic.twitter.com/iB14DpSH0x

The media protest was briefly discussed in parliament with the prime minister accusing the previous government (which is now the opposition) of passing laws that gag the press. Meanwhile, the police said they will conduct a review of their policies on dealing with the media during official operations.