How Ethiopia's ruling coalition created a playbook for disinformation 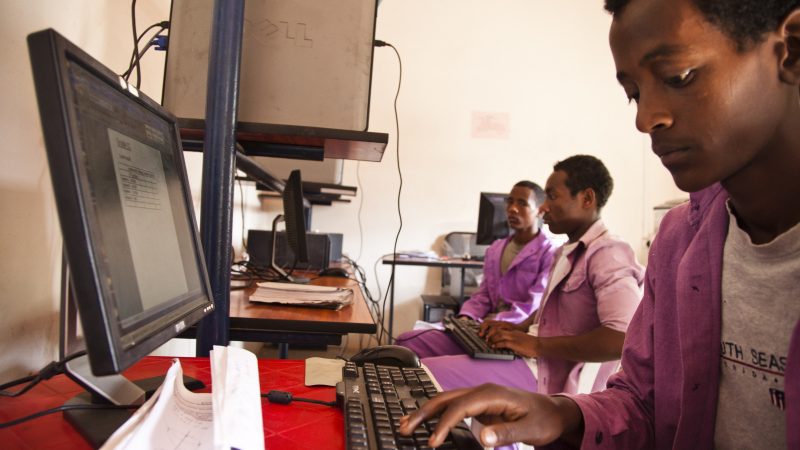 A young man in Ethiopia works at a desktop computer. Photo taken on November 28, 2011, via UNICEF on Flickr.

This story is the first in a two-part series on online disinformation and politics in Ethiopia. You can read the second part here.

A deep split that exists within Ethiopia's ruling coalition — the Ethiopian People's Revolutionary Democratic Front (the EPRDF) —was made evident over the last few weeks when a Facebook row broke out between two major political party members who disagreed on the historical accounts of Ethiopia as a modern state.

The row revealed how party members within the EPRDF use social media — through posts and memes — to manipulate public opinion and spread misinformation and incendiary content.

Until 2018, the TPLF was the dominant party in the coalition, holding absolute power for over 25 years. ADP and ODP have joined forces to put an end to the supremacy of TPLF, yet its members continue their rivalry, with infighting that usually goes under the radar. Tensions have risen steadily since April 2018, when Abiy Ahmed of the ODP was sworn in as prime minister.

On October 4, ODP-ADP infighting burst out into the open when members and supporters of ADP and ODP started to bicker over a remark made by the vice president of Oromia Regional State, Shimeles Abdisa, in Addis Ababa, on the eve of Irreecha (an annual celebration marking the beginning of spring).

In his remarks, Abdisa hailed the Irreecha celebration in Addis Ababa, which he described as the very place where Oromos were defeated and humiliated by the old regime:

In his speech, Abdisa struck a triumphant tone and marked the day's celebration in Addis as a turning point in the struggle of the Oromo people. He used the Amharic word neftegna (“riflemen” in English) to refer to the ruling class established in the wake of Emperor Menelik II's conquest in southern Ethiopia in the late 19th century.

Today, many ethnic Amahras view Emperor Menelik II as a symbol of triumph and defiance of European colonialism, while many Oromos consider him the root cause of their social and cultural subjugation.

Abdisa’s use of the term neftegna prompted backlash given that it is often used to refer to members of Emperor Menelik II’s army after TPLF came to power in 1991.

The following day, in a Facebook post, Asemahegn Aseres, a top ADP member, accused Abdisa of employing coded language to intimidate the Amhara people and, in turn, drew the ire of Taye Dendea, a top ODP member, who saw Asemahegn’s accusation as a denial of the historical social and cultural subjugation the Oromos suffered.

Dueling statements made by Aseres and Dendea exemplify the differences in interpretations of Ethiopia’s historical events among the country’s elites. While the ADP considers the formation of a modern Ethiopian state as faultless and virtuous, the ODP understands its formation as a process that led to the subjugation and humiliation of Oromos at the hands of Ethiopian emperors.

Aseres and Dendea have several things in common: They are young politicians who aspire to long political careers and whose parties, the ADP and ODP, — have banded together to bring down the supremacy of TPLF in April 2018.

Their row on Facebook bolstered their popularity and ushered an intense wave of political polarization freighted with misinformation. 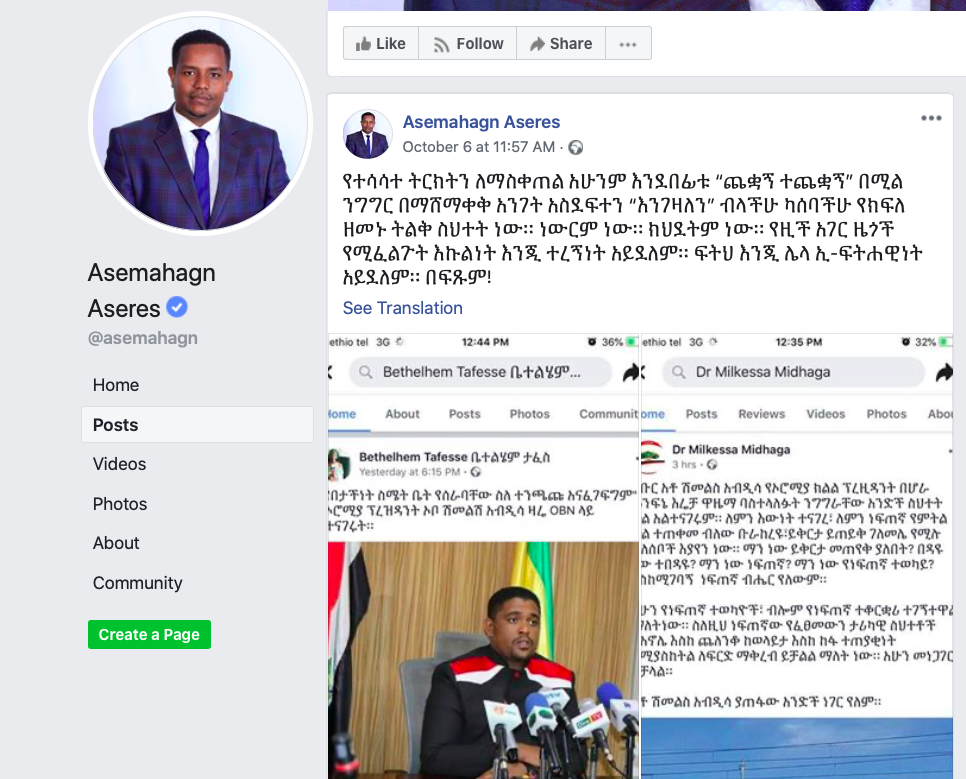 Their spat led to an outpouring of support on their respective Facebook pages, feverishly gathering up reactions, comments, and shares. 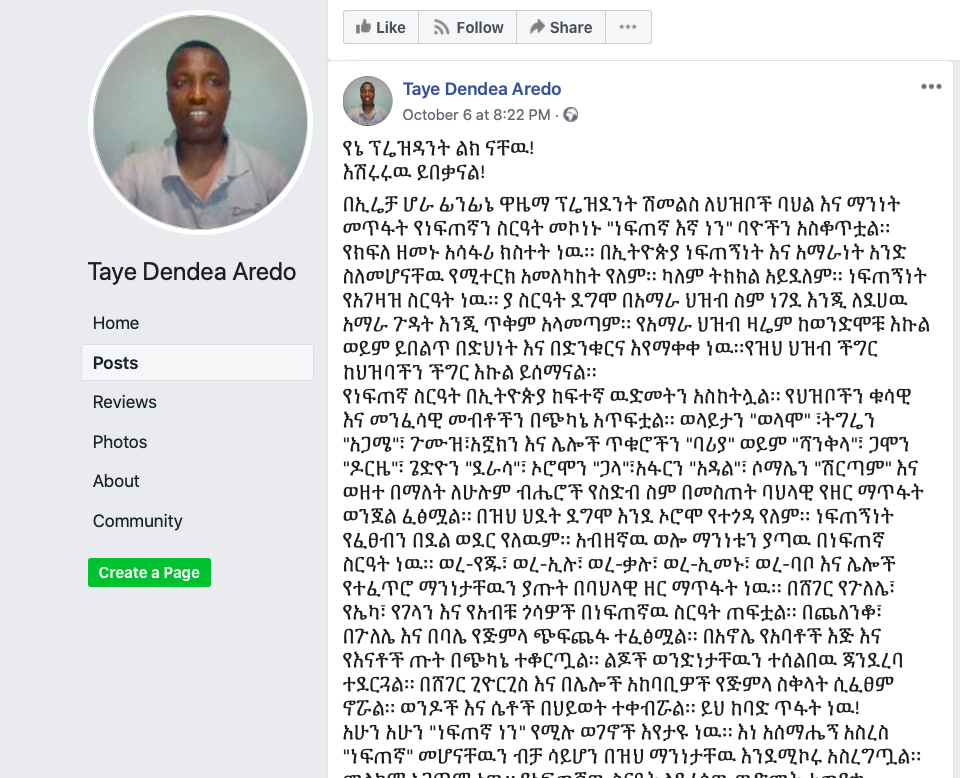 These numbers aren’t enough to gauge the extent of this political divide among Ethiopian citizens. However, it shows how two distinct nationalist discourses on social media struggle for primacy in the debate over Ethiopia’s past events and political future.

The heated exchange not only tests the tactical alliance of ADP and ODP, but it also exerts a “contagion effect” by galvanizing sympathizers by employing misinformation, inflammatory stories, memes and videos on social media.

For years, members of the EPRDF have used social media to manipulate public opinion on social media for their benefit. In 2017, when a series of EPRDF top-secret documents were leaked online, an army of paid Facebook personalities and bloggers was deployed to produce disparaging comments and misinformation about critics of the Ethiopian government.

However, as the internal power struggle and the ideological battle intensified among EPRDF members, misinformation tactics are shifting from targeting critics of the Ethiopian government to targeting each other and building allies from opposition groups.

For example, on September 3, 2019 Aseres made a little-noticed interview with EthiopianDJ, a Facebook page with about 1.1 million followers, known for spreading fake news, incendiary memes and conspiracy theories including one that says Prime Minister Abiy Ahmed somehow was part of the plot that killed the country's top military officials and leaders of the Amhara region in June 2019.

In another incident, EthiopianDJ posted images that purported to show security officers confiscating green, yellow and red flags from followers of the Ethiopian Orthodox Church, during an annual Meskel celebration, while tolerating the Oromo Liberation Front (OLF) flag. (The green, yellow and red flag is associated with Ethiopia’s past emperors while the OLF flag represents Oromo resistance.)

The images are authentic, but they are misleading. The images were actually taken from two different celebrations, Meskel and Irrechaa, held a week apart — albeit in the same venue. During these celebrations, security officers seized and removed flags considered unlawful by the Ethiopian government.

Most often displaying flags associated with opposition groups and old Ethiopian regimes during public events such as Meskel and Irreechaa are considered illegal.

There is no indication that EthiopianDJ has received money from EPRDF, but it offers a fresh example of the misinformation tactics of the disintegrating party. 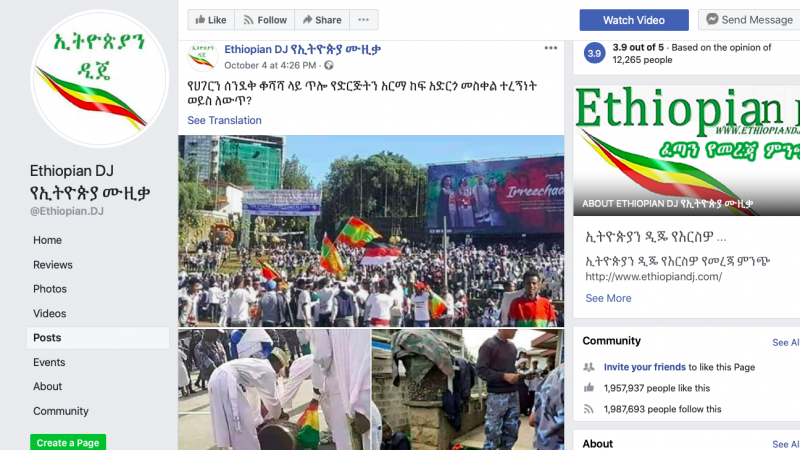 EthiopiaDJ's post with these images was shared about 1,000 times and generated 782 comments.

Manipulation tactics used by EPRDF members against each other in their internal power struggle serve as a blueprint for opposition groups to attack their opponents and the government.

In one high-profile incident, well-known opposition activist, Eskinder Nega, tweeted a two-line poem purportedly written by famed poet and actress, Meron Getenet, which takes a swipe at the leadership of Prime Minister Abiy Ahmed. But the poem was subsequently found to be taken from an imposter Facebook page that used Meron’s name. The poem, a sharp and direct takedown of Abiy Ahmed’s leadership (without mentioning Abiy's name), characterizes his administration as “directionless.”

A fact-checking journalist reported the poem attributed to Meron was wrong, but Nega’s original message had already been retweeted over 76 times and his tweet has not yet been deleted.

In another online incident, Oromo activist Jawar Mohammed, who has more than 1.7 million followers on Facebook, questioned the integrity of the National Electoral Board of Ethiopia (NEBE), after its communication adviser tweeted a question to Addis Ababa’s mayor (an ODP member) when the Irreecha holiday-related road closures will end.

In what has become one of his most high-performing posts, Jawar shared the screengrab of the tweet along with a statement questioning the integrity of NEBE on his Facebook page.

Given the intense political polarization around the celebration of Irreecha in Addis Ababa, some consider the tweet from NEBE's communication adviser insensitive. But Jawar's Facebook post is also misleading.

These incidents of mis- and disinformation and misinformation fuel pre-election suspicion as Ethiopia plans to hold highly-anticipated general elections in about ten months. 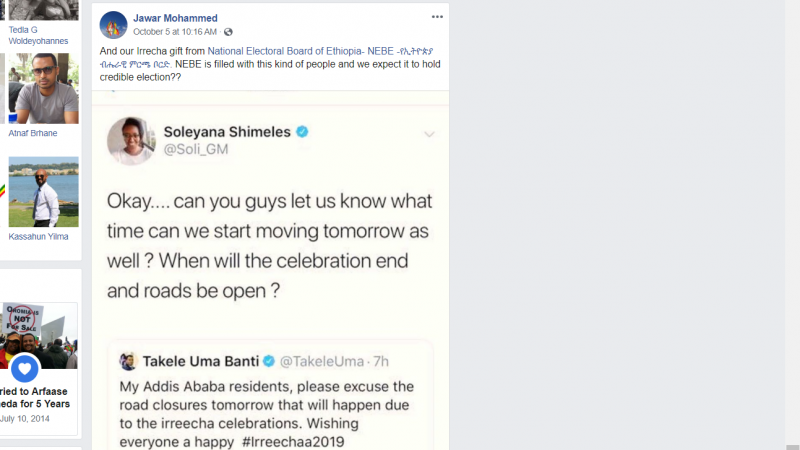 A screenshot of post by Jawar Mohammed questioning the integrity of the election board.