From dictatorship to democracy: All eyes on The Gambia’s upcoming Universal Periodic Review

'This regime is almost as cryptic as its predecessor'

The Gambia's President Adama Barrow speaks at a conference “Shaping The Gambia's Future: How to Build a Path to Sustainable Progress,” April 18, 2018. Photo by Chatham House and used with permission via Wikimedia Commons, CC BY 2.0.

Editor's note: This article by Reyhana Masters is republished through a partnership between Global Voices and IFEX and originally appeared here.

Ahead of The Gambia's Universal Periodic Review, IFEX regional editor Reyhana Masters asks: What issues are at the top of civil society’s agenda?

Saikou Jammeh, with the Gambian Press Union, Vivian Affoah, with Media Foundation for West Africa, Alieu Sowe, with the Give1 Project and Demba Kandeh, an associate professor at the University of The Gambia, share their thoughts on the country’s progress and remaining challenges, in Geneva, Switzerland, ahead of the upcoming Universal Periodic Review Process in November:

This cautious note can be traced back to the trauma of living under the tyrannical rule of former President Yahya Jammeh. The residue of the abusive and autocratic 22 years of his rule remains embedded in the people of The Gambia. The change of leadership in 2017 heralded a new administration that brought change, but not memory loss.

The things that happened under Jammeh are currently living with us. The human rights violations remain with us. It requires a lot of work to fix what has been damaged. … The biggest challenge that we are facing is that we have a president who does not see himself as a transitional president. As long as he sees himself in a permanent role, he will be making political decisions and not moral and honourable decisions. Those political decisions may not be favourable to the demand for justice for those violations.

“The things that happened under Jammeh are currently living with us. The human rights violations remain with us. It requires a lot of work to fix what has been damaged.” — Saikou Jammeh, secretary-general, The Gambia Press Union

The dramatic entry of the mild-mannered, soft-spoken Adama Barrow into the political landscape of The Gambia was considered temporary. It was always the plan that with support and backing from seven of the opposition political parties, Barrow would take over the helm as president for three years, carry out the immediate reforms needed for an enabling environment for free and fair elections — and then step down.

His reluctance to do that has given birth to a grassroots movement — “Three Years Jotna” or “Three Years Enough” — which has resolved to dispute his continued leadership through protests in December.

The hopes people have of Barrow and his government going into this third cycle of the UPR process are high, specifically because the state response to the first and second cycles of the UPR was so disappointing.

Whether their hopes will be realized is not clear. Jammeh summed it up this way: 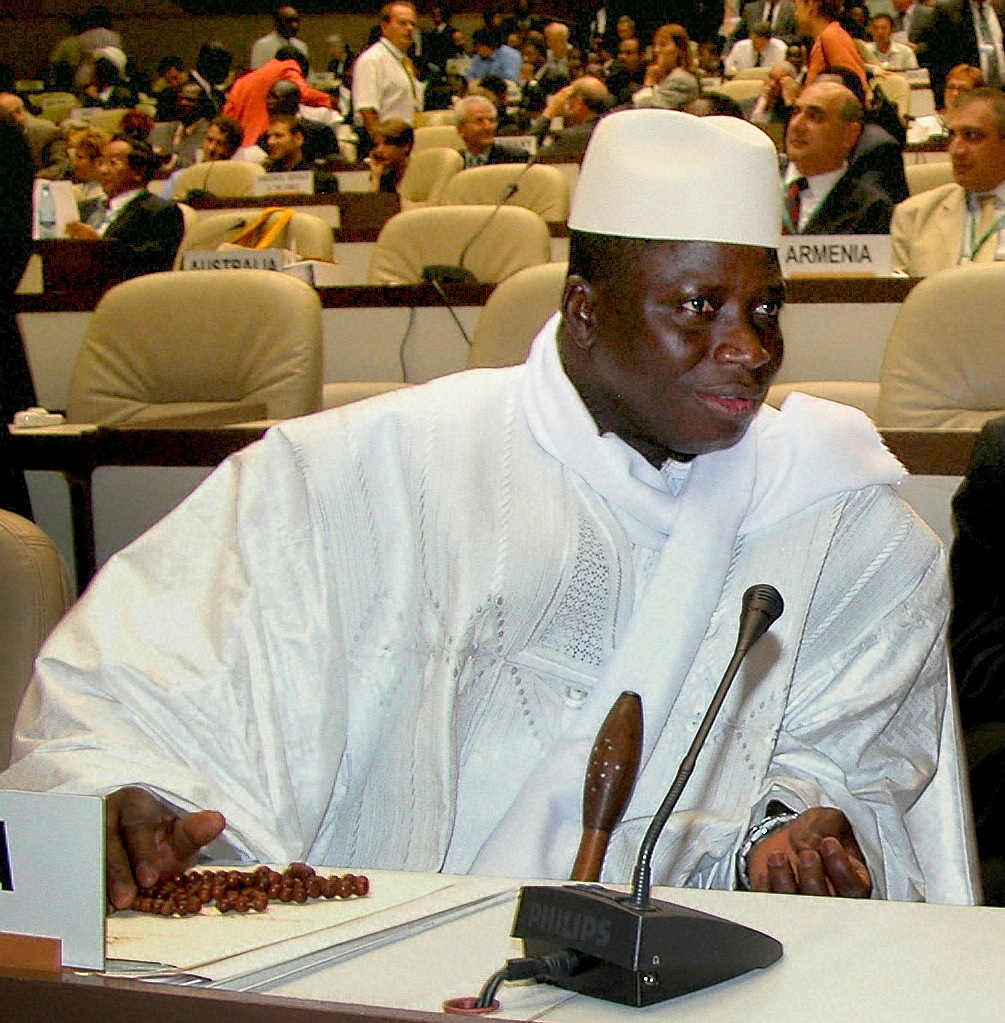 What is the UPR process?

Every member country of the United Nations goes through a five-year intense human rights review cycle that incorporates three stages. The compilation of the report ahead of the UPR review is the first critical step, and civil society organizations, human rights institutions and UN agencies are all part of the process. 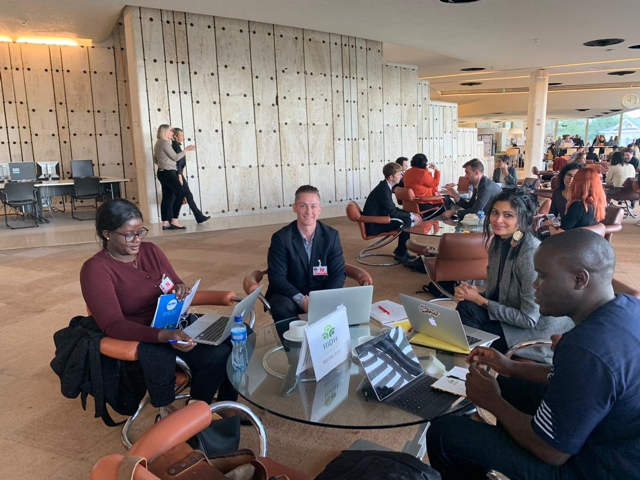 The Gambia was absent during the adoption of its UPR report at the Human Rights Council (HRC) on March 28, 2015. Instead, they provided a written response to the 171 recommendations, indicating their acceptance of 93 and “noting” 78, essentially, rejecting them. “This was a remarkable improvement in terms of the state’s responses, but why there was a change of position remains a mystery,” Jammeh said.

The GPU, the MFWA and IFEX were recently in Geneva, Switzerland, to meet with members of the diplomatic community, ahead of the UPR, scheduled for November 5. The adoption of the recommendations to the submitted report will take place during the Human Rights Council’s regular session in March 2020:

As part of the advocacy towards improving the freedom of expression and media development in The Gambia, @gmpressunion , @IFEX and @TheMFWA is undertaking a Mission in Geneva to talk to Diplomatic Missions on the country’s upcoming UPR pic.twitter.com/1dKtPteNau

Freedom of expression benefits from a change of leadership

President Barrow began his presidential term with promise, and freedom of expression benefitted the most. “Gambians are more vocal on issues of legitimate public interest — and even those that are not,” highlighted Jammeh:

There has been a kind of a media boom after the dictatorship. We now have about four television stations, compared to only one. Radio stations now review newspapers in English and in local languages. The print media journalists are bold, and online media presence is huge. There is pluralism and diversity and the people are taking advantage of a multiplicity of platforms, including through voiceover internet protocols — to express views and opinions.

On the other hand, Affoah pointed out:

The financial obligations imposed on the media are prohibitive, and taxes imposed on newspapers and imported newsprint and exorbitant broadcast license fees curbed the growth of the media.”

In June 2017, the Daily Observer — one of the most widely read papers and one considered to be Jammeh’s mouthpiece — was closed down by the Gambia Revenue Authority for non-payment of taxes. The newspaper temporarily resumed operations, but two weeks later was shut down again, after its failure to pay outstanding taxes of over $360,000 USD.

Honing in on digital rights

Honing in on digital inclusion, Alieu Sowe, The Gambia country director with Give1 Project, underscored the high cost of access to the internet as a fundamental issue of freedom of expression and access to information in The Gambia:

Just one gigabyte of data costs five US dollars, yet many people are living on less than one US dollar a day, making it impossible for the majority of people and marginalized groups to pay for access.

One of the recommendations being made in a joint submission by groups involved in the Internet Freedom in Africa/UPR project speaks directly to this issue:

…providing equal access to technology and communications to all citizens, including disadvantaged and marginalised groups of the population, by removing barriers to access and improving affordability, as well as expanding infrastructure and desisting from internet disruptions.

The stakeholders responsible for the submission include Collaboration on International ICT Policy for East and Southern Africa (CIPESA), Small Media, The Gambia Press Union, Give1 Project Gambia and the  YMCA Computer Training Centre, and Digital Studio.

Critics and activists acknowledge that the initial enthusiasm and speed of improvements has declined. “There has been some reluctance and a slowdown on some of the tangible reforms,” says Demba Kandeh, an associate professor at the University of The Gambia.

Jammeh agreed with this sentiment:

The current administration continues to drag its feet, yet there are a number of laws governing speech that have not been reformed. These include [laws relating to] sedition and false news — or even speech conducive to breach of the peace

Jammeh and Affoah said their organizations will continue advocating for the implementation of progressive laws. “The government needs to pass legislation such as the Right to Information, as well as broadcasting regulations that will enhance the enjoyment of freedom of expression rights,” Affoah said.

This regime is almost as cryptic as its predecessor in terms of accessing information critical for purposes of accountability, transparency and meaningful participation. But rather than legislating in favour of more systematically sharing information relating to abuse of power and corruption, the government is thinking of taking drastic measures to address the leaks.

With respect to the transformation of the state broadcaster, professor Kandeh believes that even if it does not come up in the UPR process, it should be encouraged:

Under Jammeh, the broadcaster was just a mouthpiece of the government. This should not be allowed to creep back. It should be independent.

Both Sowe and Kandeh emphasize the lack of protection for whistleblowers. “The law is extremely draconian in The Gambia, with a potential 30-year sentence for leaking “official secrets”. The vague definition of what is considered secret means any random memo from one official to another could be claimed to fall under this definition, explains Kandeh.

“The law is extremely draconian in The Gambia, with a potential 30-year sentence for leaking ‘official secrets'”. — Demba Kandeh, professor, The Gambia

“You can’t safely expose corruption and people are still afraid of the law on this, even under the new government,” Sowe said.

President Barrow and his administration are applauded for the ongoing constitutional process, designed to lead to the drafting of a new constitution.

Seen as a relic of the Jammeh government and his autocratic rule, the 1997 constitution had been subject to numerous amendments and contained provisions that gave significant power to the president.

“The CRC is an attempt by the government to show they are committed to reviewing the constitution to include provisions that respect human rights and is in tandem with their international obligation,” said Affoah.

In the country's second UPR cycle in 2014, the government received a recommendation to withdraw criminal laws sanctioning homosexuality and take action to combat violence based on sexual orientation and gender identity. There are, however, concerns that the new constitution, drafted through what many consider a democratic and inclusive process, will still exclude protective clauses for LGBTQ rights.

There was a backlash. Government rejected it and there was a huge stink, domestically. There was some concern and fear in civil society about the impact on the LGBTQI community. As a result, civil society has gotten quieter. They are reluctant to talk about this openly, for fear of social repercussions, harassment, and violence.

“If recommendations are going to be made around LGBTQI issues, the framing will be very important. Gambian society is sensitive and not yet necessarily accepting, so rejection is likely,” Sowe added.

In working toward repairing The Gambia’s fragmented society, the most progressive undertaking has been the establishment of the Truth, Reconciliation and Reparations Commission (TRRC), through an Act passed in December 2017 and assented by President Barrow a month later.  Promoted under the catchphrase “Never Again,” the TRRC hearings have been accessible throughout the country and are considered a critical step toward justice.

“It is through this TRRC process that we have come to know the people that were behind the crimes and the injustices that were meted out against journalists. In our recommendations, we are saying that justice for the violations against journalists has to be pursued. Even though the violations were sanctioned by the previous regime, justice has to be taken up by this government,” Jammeh said.

Hope continues to be tempered with caution. In closing, Jammeh reiterated his concern:

The things that are wrong in the country now work to the advantage of anyone sitting in power as president, so the recommendations made through the UPR process are not a priority.