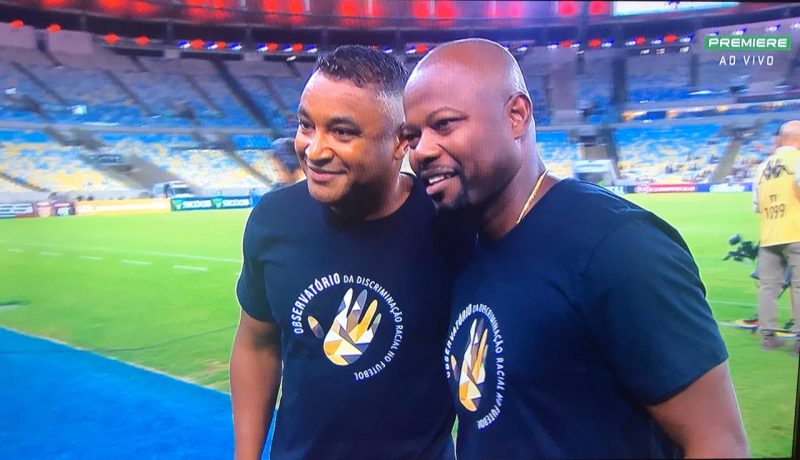 When Rio de Janeiro's Maracanã stadium was built for the 1950 FIFA World Cup in Brazil, it aspired to be a football temple. Those hopes were somewhat dashed after Uruguay beat Brazil in that tournament's final. Reeling Brazilians were quick to blame goalkeeper Moacir Barbosa for the defeat. A black man, he was turned into a scapegoat; there was no shortage of pundits arguing only white players were suitable for goalkeeping.

Almost 60 years after that fateful day, the stadium was again the scene of a memorable moment for Brazil's football. On October 12, before the match between Fluminense FC and EC Bahia, both teams’ coaches, Marcão and Roger Machado, shook hands and posed for pictures while wearing t-shirts of the Racial Observatory of Brazilian Football, an organization that monitors discrimination in the sport. The two men are the only black coaches in Brazil's main football league, called the “A series”, and contested by 20 clubs.

The lack of black representation in Brazil's football management is astonishing when considering the country's demographics. Over 55,8 percent of Brazil's population identifies either as black (9,3 percent) or brown (46,5 percent). Brazil was the largest importer of African slaves in the Western world between the 16th and 19th centuries, as well as the region's last to abolish slavery (in 1888).

Once again, we wear the @ObRacialFutebol t-shirt! It shouldn't be like that, but the match marks the encounter of the only two black coaches in the A series

In a press conference after the match, Roger Machado, who has been vocal in the past about discrimination in football, talked about how Brazil's structural racism is perpetuated by those who hold power and privilege. A video of his speech went viral on social media. He said:

To me, this is the proof that there is prejudice, because [this meeting] is something that draws attention. More than 50 percent of our population is black, but representation is disproportional. I think we ought to think about it and question it. If there is no prejudice in Brazil, why do black people are less educated than white people? Why is 70 percent of our prison population comprised of black people? Why are young black men killed more often than any other social group? Why is black people's income the lowest? And among white and black women, why are black women paid less? Why do black women die more often than white women? There are several types of prejudice. (…) To deny this and to silence about is to confirm the racism.

Roger Machado, Bahia's coach, set the record straight when speaking about Brazil's structural racism and and supporting actions against racial discrimination before the match between @ECBahia x @FluminenseFC

The photo-op was suggested by the Racial Observatory of Brazilian Football, an organization created by Marcelo Carvalho who spoke with Global Voices via WhatsApp:

Hello, @ECBahia and @FluminenseFC, we have a dream! What if, in the next match, the only two black coaches of the A series met wearing our T-shirt? Both have talked about racial issues before and it will be a great opportunity to advance the debate. How about it? #EnoughOfPrejudice

Carvalho said he had the idea after Fluminense hired Marcão to coach its football team on October 4. Many reporters, according to him, started to ask the Observatory for data on black coaches working at main league clubs over the past five years. Marcelo says the answer is four, with usually only two or three employed at the same time.

In the 2018 World Cup in Russia, there was only one black coach leading a national team: Senegal's Aliou Cissé, who is also outspoken about racial issues.

As Roger said, it caught everyone’s attention, especially in the sports media, that we had two black coaches present. [They realized] that there were only two of them and they would face one another. This shouldn’t be a reason for surprise, it should be normal.

Last year, EC Bahia hosted the launch of the Observatory’s 2017 report, which listed 43 cases of discrimination on that year — an increase of 72 percent from 2016. It was also the first year in which Bahia, the Brazilian state home to largest Afro-Brazilian population, registered an incident. From January to September 2019, the Observatory counted 39 cases of discrimination in football championships in Brazil.

Marcelo says that what explains the increase is Brazilian society's rising intolerance with racism, which pushes clubs and players to speak up. He adds:

I believe that in the past two years Brazilian football has paid more attention to racial issues. Every time we release a new report that shows an increase in [racism] cases, every time we receive more media coverage and report new cases, it’s raising more awareness among journalists, fans and, maybe, players (we don’t know about that one for sure yet). But it is raising awareness in the football world.