Was the Nobel Peace Prize for Ethiopia’s prime minister premature? 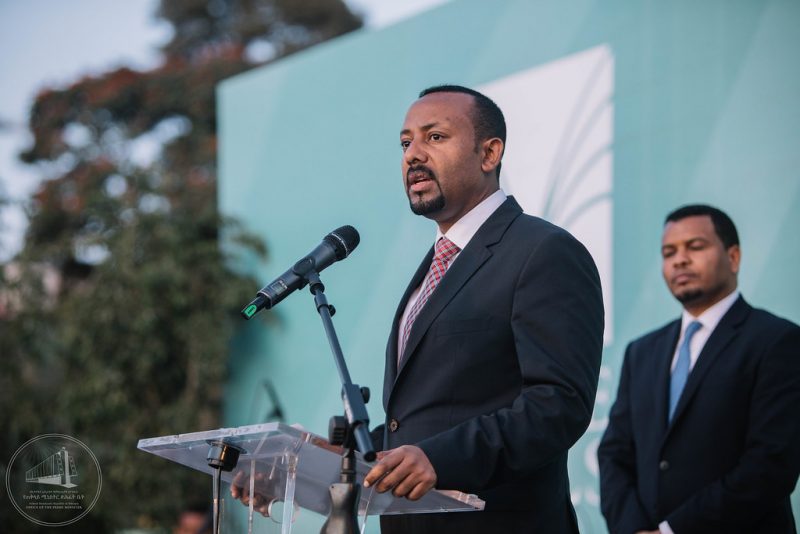 On October 12, barely 24 hours after Ethiopian Prime Minister Dr. Abiy Ahmed Ali was awarded the Nobel Peace Prize for 2019, the organizers of a protest were arrested and prevented from addressing a press conference in Addis Ababa.

I have learned that my former prison inmate, Nathanael Yalemzewed, is rearrested today for organizing a peaceful demonstration called by @eskinder_nega‘s movement, Balderas council. It didn't take 24Hrs since the @NobelPrize selected @AbiyAhmedAli for #NobelPeacePrize 2019. pic.twitter.com/tKypCt93sk

The demonstration, scheduled for October 13 in Meskel Square in the Ethiopian capital, was organized by the Baladera Council movement to protest the “ownership claim by Oromo politicians over Addis Ababa,” and the “suppression” of political parties and civil society. The Baldera Council is led by Eskinder Nega, an Ethiopian journalist and blogger who has been jailed several times by the government on various charges.

As many feared the gov't of @PMEthiopia failed the first post- @NobelPrize test of respecting the right to protest in #AddisAbaba. While a pro-Abiy demonstration is allowed in haste, a protest planned much earlier is denied. This is unacceptable, dangerous trend of ODP operarives https://t.co/zbufmn7PBJ

@PMEthiopia I hereby join the rest of Africa and the world at large in celebrating with the great people of Ethiopia and Prime Minister Abiy Ahmed for winning the 2019 Nobel Peace Prize Award. The Government & People of Liberia extend warmest felicitations for this noble feat. pic.twitter.com/vbZqyfUuJK

The news was received with enthusiasm, but also some ambivalence.

Abiy, a 43-year-old former intelligence officer, became the fourth prime minister of Ethiopia on April 2, 2018. He immediately launched a series of reforms that were not only unprecedented but which would have seemed impossible five years ago.

Ethnically-motivated conflicts are not new in Ethiopia, which has over 80 ethnic groups. But the unrest and protests in Ethiopia's two largest regions, Oromia and Amhara, sparked by encroachment on Oromia lands resulting from the expansion of the Amhara region, practically tore the Horn of African country apart from 2015 to early 2018 — and drove Desalegn to a “surprise” resignation in April 2018.

Abiy contested the elections of the ruling Ethiopian People’s Revolutionary Democratic Front (EPRDF), winning 108 votes out of 180 to replace Desalegn as party chairman and, consequently, as prime minister of the country.

An ethnic Oromo with a mixed Christian and Muslim background, along with military experience and expertise in military intelligence, Abiy was seen as a figure capable of easing the turmoil in the country. One Chatham House analyst writing about the elections ascribed his victory to the “secretive and complex alliance-building” among the four political parties that make up the EPRDF, and noted that he “seems early on to have persuaded many he can bring stability, unity and reform to the country.”

In relatively short order, Abiy lifted the state of emergency the previous administration had imposed to quell unrest, and released thousands of political prisoners. The rapid turnaround of the political landscape paved the way for the return of exiled dissidents and the unblocking of hundreds of websites and TV channels. Notably, Abiy amended that draconian tool of political repression, Ethiopia’s anti-terrorism law.

But his most outstanding achievement has been the historic peace deal with neighbouring Eritrea, which netted him the 2019 Nobel Peace Prize:

Abiy Ahmed quickly worked out the principles of a peace agreement to end the long “no peace, no war” stalemate between the two countries. These principles are set out in the declarations that Prime Minister Abiy and President Afwerki signed in Asmara and Jeddah last July and September. An important premise for the breakthrough was Abiy Ahmed’s unconditional willingness to accept the arbitration ruling of an international boundary commission in 2002.

But Abiy’s reforms have not proceeded without opposition. In June 2018, he survived an explosion that killed two other people during a political rally in the Tigray province. As Tanzanian MP January Makamba, one of Abiy's generational peers, has noted in an otherwise laudatory tweet: “Ethiopia is a tough and complicated place.”

Ethnic violence resulting in 2.9 million displacements in 2018 and a failed coup in the Amhara region last June are arguably two security threats capable of undermining the national elections scheduled for next year. In addition, Ethiopia still has the highest poverty prevalence rate in the world despite strong economic indices. Abiy's “liberal reformer” image hinges on his ability to transform the Ethiopian economy.

Ethiopia, under Abiy’s watch, also continues to shut down the internet amidst dynamics “more complicated than they had been prior to the start of the political reforms.” A nationwide internet blackout occurred from June 11-14, during which SMS messaging services were also inaccessible.

On September 26, Dr. Getahun Mekuria, Ethiopia's Minister of Innovation and Technology, represented by State Minister of the Productivity Enhancement Sector Ato Jemal Beker, stated in his opening remarks at the Forum on Internet Freedom in Africa (FIFAfrica), that although the government has opened up digital space in the country, there remains “a strong need to temper internet freedom with mechanisms in place to control hate speech and mis- and disinformation online.”

As the incident described at the beginning of this essay shows, Abiy's ability to sustain freedom of expression and political dissent in this Horn of Africa nation hangs on a fragile thread.

In spite of the problems that continue to plague Ethiopia, however, it is easy to see understand why Abiy has been welcomed as a breath of fresh air. In a continent ruled by elderly and sometimes ailing leaders, the dynamic 43-year-old represents a break from an old guard which, in many cases, has clung to power against all odds. 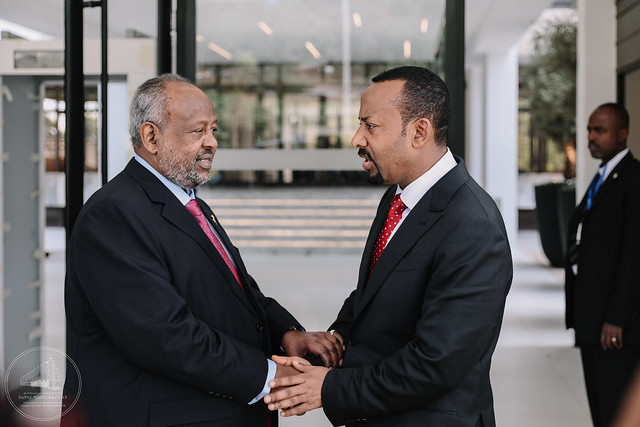 Uganda’s 75-year-old President Yoweri Kaguta Museveni has held on to power since 1986, consistently shrinking the political space in the East African country by destroying any opposition to his rule.

John Magufuli’s Tanzania is a practically a police state with the recent clampdown on opposition politics, human rights and press freedom.

Nigeria’s Muhammadu Buhari, 76, also has scant regard for human rights, freedom of expression, or political dissent.

But given the weakness of the competition, might it be rather too early to definitively sing Abiy's praises?

We really can afford to withhold praise & accolades from ANY African leader without a spotless record on free speech & human rights.

Heaven will not fall.

Our biggest problem is that most of our leaders, both smart & inept, become oppressors.

So freedom must be our #1 test.

After awarding the 2009 Nobel Peace Prize to Barack Obama in the early days of his administration, one would have thought that the Nobel Committee would be more circumspect about awarding another fledgling sitting president. Obama, for instance, did not keep the peace in Libya; rather, he created a situation of chaos that rages there until now.

Other laureates have also failed to live up to their promise, notably Myanmar politician Aung San Suu Kyi, who won the prize in 1991 while under house arrest and has since, as de facto government leader of the country, presided over the ethnic cleansing of Rohingya Muslims.

North Vietnamese leader Le Duc Tho famously rejected the award — jointly presented to him and the controversial Henry Kissinger in 1973 — on the grounds that peace had not yet been restored in his country.

And the Nobel committee jumps on the “Ethiopian Spring” train. A peace price for Abiy Ahmed!

He's made a lot of progress very quickly. But things are pretty fragile, and there are a lot of ways that the committee could end up regretting this. pic.twitter.com/3MIzTxbIQn

One assumes the Committee grants such awards in the anticipatory hope that it would encourage the laureate would to remain on a promising path of progress. But it would make more sense to wait until the end of an administration and objectively assess whether an individual has in fact lived up to their promise and really deserves the award.

Another reason for caution is that most of the African leaders mentioned above did not start out as despots. Museveni fought and kicked out the murderous dictator Idi Amin. When Magufuli took the reins of power, he was the poster boy for transparency and frugal governance. Buhari’s integrity and apparent zero-tolerance for corruption made him the “Messiah” for which Nigeria long yearned. Even the late Robert Mugabe of Zimbabwe was once one of Africa’s foremost freedom fighters — only to leave office in disgrace after 37 tumultuous years.

Critics also say that the PM “relies on his charisma to drive change,” rather than make use of institutional structures of government. While this might be efficient and useful for cutting through government bureaucracy, it might not provide an adequate foundation for sustainable long-term reforms.

Will Abiy be different from the others and continue on the path of peace and reform? Or will he follow the infamous route that his contemporaries in the continent have travelled? For both Ethiopia and Africa’s sake, I hope it is the former.