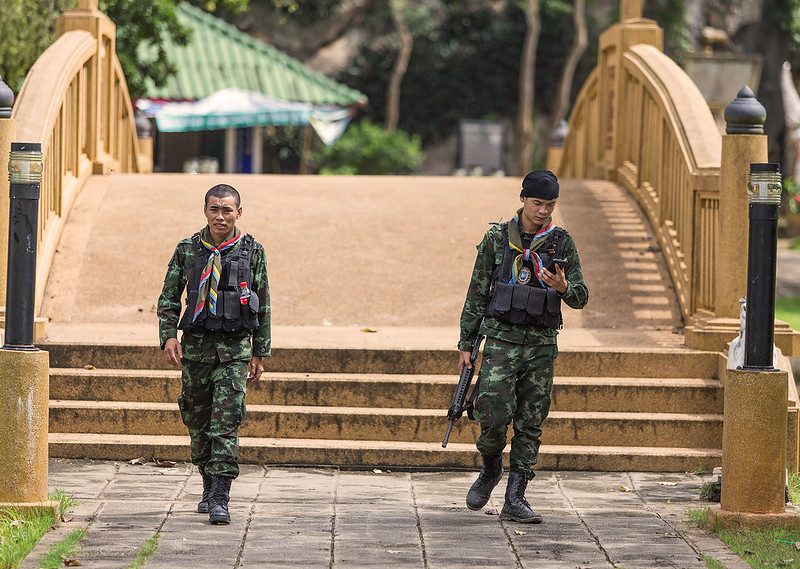 After acquitting five individuals accused of murder in southern Thailand on 4 October 2019, Judge Khanakorn Pianchana read a statement inside the Yala provincial courtroom alleging political and judicial interference. After this, he took a handgun and shot himself in the chest. The incident became a national issue and led many to question the independence and credibility of the courts. Judge Khanakorn sustained injuries and is now recuperating.

Judge Khanakorn issued a 25-page statement explaining his actions. Khanakorn wrote that he was ordered by his superiors to convict the accused despite insufficient evidence to hand out a guilty verdict. This was uploaded on Facebook on the day of the shooting but it quickly disappeared.

In 2018, authorities in southern Thailand arrested five suspects who were charged with murder, secret association, conspiracy, and gun-related crimes. If convicted, the accused could be sentenced to death.

Tension has been brewing in south Thailand for years with many groups asserting their right to self-determination. The region has a large Muslim population in a Buddhist-dominated country. The government has imposed emergency measures which means state forces can arrest individuals without a warrant and detain suspects for a given time.

Judge Khanakorn believed that evidence obtained during interrogation and detention under the emergency rules of the government cannot be considered lawful.

In his statement, he urged legislators to amend the Court of Justice law in order to prohibit a review of rulings before they are read. At present, senior officials in the Judiciary can review the verdict of judges even before the ruling is announced in the trial. Senior judges can compel subordinates to rewrite their initial decision. Judge Khanakorn also asked the government to give ‘financial fairness’ to judges.

My statements might hold weight as light as a feather, but a judge’s heart must be as firm as a mountain.

Judge Khanakorn feared that his decision to exonerate the accused would trigger an investigation and ruin his career. But at the same time, he could not convict the suspects for lack of evidence. Seeing no way out, he decided to shoot himself.

The shooting quickly gained national attention. Some supporters of the military accused the judge of staging a drama to stir political controversy. Some believe it is part of a conspiracy to aid the opposition in probing the judiciary.

Court of Justice officials insist that the country’s judicial system remains fair and independent and stated that the Judge Khanakorn shooting incident could be an indication that he’s facing several ‘personal issues.’

Just the same, the government has set-up an inquiry into the allegations raised by the judge to protect the credibility of the judiciary

Atiya Achakulwisut, a columnist for the Bangkok Post newspaper, summed up the reaction of many Thais:

His putting his life on the line to call for attention to what he believes is a malady eroding the justice system is as outrageous as it is sickening, especially when considering what amount of despair could have driven the judge to the point of self-sacrifice.

…that it is an extremely complicated issue which can easily result in innocent people being wrongly punished or scapegoated. When that is the case, such injustice only fuels resentment among the Muslim majority and hinders state attempts to bring peace to the troubled region.

Cross-Cultural Foundation, an NGO based in southern Thailand, has a recommendation:

Immediately transfer all persons involved in Judge Khanakorn’s predicament out of their posts: Such an order will ensure that an ensuing investigation will be fair for all parties, free from internal influence and the designated inquiry team should also include external advisors. The investigative findings should also bring about preventive measures to guarantee a non-recurrence of interference in the judicial independence.

Frederick Rawski, the Asia director of the International Commission of Jurists, reiterates the need for political and judicial reforms in Thailand:

This unfortunate incident again shows the need for sustained reforms of law enforcement and particularly of the independence of the judiciary in Thailand.

This case again shows how misuse of emergency decrees in southern Thailand has aggravated the political pressure exerted on judges.