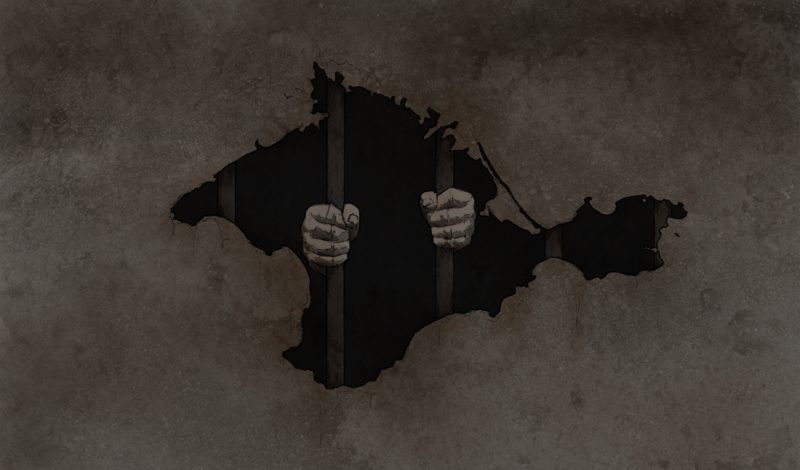 Since the annexation of Crimea in 2014, the Russian authorities have detained and arrested hundreds of Crimean Tatars and other activists. Illustration by Tom Venner, used with permission.

Since Russia annexed the Crimean peninsula in 2014, Moscow's security services and criminal prosecutors have been working flat out. They have increasingly targeted pro-Ukrainian activists, political dissidents, and above all members of the Crimean Tatar minority.

Crimea's majority-Muslim Tatars have had a troubled history with Russia ever since the peninsula was first annexed by Moscow in 1783. Then in 1944, the Soviet authorities accused the Tatars of treason and deported the entire ethnic group to central Asia. They returned home in the 1980s and 1990s to newly-independent Ukraine, but the memory of that deportation lives on. So when Moscow imposed control on their homeland again, Crimean Tatars were suspicious — and that suspicion is mutual.

In 2016, the local prosecutor-general banned the Majlis, the Crimean Tatar communal governing body, on grounds of “extremism” and “sabotage.” Today, the Russian authorities also present many of the arrests and detentions of Crimean Tatars as anti-extremist operations, alleging that they are attempting to crack down on Hizb-ut-Tahrir, an Islamist organisation banned in Russia since 2003 but permitted in Ukraine. While it is not implausible that the organisation has a presence on the peninsula, Russian law enforcement has cast a far wider net. Human rights defenders suggest that this is deliberate, and that the arrests of Crimean Tatar men and their families amount to a systematic attempt to silence vocal Crimean Tatars. One movement in particular, they argue, is in the crosshairs: Crimean Solidarity.

On 9 April 2016 in Sevastopol, the Crimean contact group for human rights first organised a meeting of the families of all Muslims who had been arrested by Russian law enforcement in Crimea. The lawyers of the defendants were also invited to the meeting. The lawyer Emil Kurbedinov gave a speech in which he said that the day had become “the foundation date for a platform for joint action by the families of Muslims arrested in Crimea.”

Later, the Crimean Solidarity association was opened not only to relatives of those accused by Russian law enforcement of membership in Hizb-ut-Tahrir, but also to families of other political prisoners in Crimea, as well as kidnapped and missing Muslims.

Crimean Solidarity arose from the need to coordinate financial and legal assistance to the Crimean Tatar families left without husbands and fathers after the arrests. Their absence left families in need of financial and legal assistance. According to Dilyaver Memetov, a coordinator for the group, Crimean Solidarity also plays a pre-emptive role. The group holds seminars advising people in “risk groups” (meaning activists, lawyers, journalists, or bloggers) how to conduct themselves during a search or interrogation, Memetov told OVD-Info, a Russian website monitoring violations of freedom of assembly and speech.

The movement has become known for its high-profile online flash mobs such as the rolling Crimean Marathon, in which hundreds of Crimean Tatars pledge to donate ten rubles to pay defendants’ hefty fines with the slogan “единство дороже штрафов” or “unity is more precious than money.” Furthermore, in late 2018, hundreds of Crimean Tatars uploaded photographs of themselves standing alone (so as to evade Russia's ban on mass protests) holding banners reading “Crimean Tatars are not terrorists” and “our children are not terrorists.” In July 2019, several dozen Crimean Tatars stood on Moscow's Red Square holding placards with the words “the fight against terrorism in Crimea is a fight against dissent.”

Outside Crimea, Crimean Solidarity is best known for its role as a civic journalism project. Human rights activists and journalists say that without Crimean Solidarity they would be in the dark about many of the arrests and detentions on the peninsula. The group's volunteers are frequently seen documenting and photographing detentions and court cases and even live-streaming court proceedings to Crimean Solidarity's popular Facebook page.

“When searches of Crimean Tatar homes started to intensify in 2016, locals started streaming the arrests and raids on their phones and upload them to social networks. Once that caught on, the authorities became even more repressive, and the movement grew in response,” explained Tamila Tasheva, co-founder of CrimeaSOS, an NGO providing humanitarian assistance to displaced people from Crimea. “Since 2017, they've become increasingly professional in how they cover these trials and arrests. They're practically the only independent source of information left permanently on the peninsula because there is no independent journalism left there,” explained Tasheva in a café in Kyiv, the Ukrainian capital.

“I would say that over the past few years that they've been in existence, they've really developed their blogging skills in a very impressive manner. If you want to know what's happening with human rights in Crimea, your first source of information is Crimean Solidarity,” said Tanya Lokshina, associate director for Europe and Central Asia at Human Rights Watch. Lokshina added that after the occupation in 2014, many independent media publications and Crimean Tatar community media were shut down. “Apart from those few Russian journalists who travel to Crimea on a regular basis, who also naturally work with them, Crimean Solidarity is the only permanent source of information who is constantly on the ground there,” Lokshina stated.

Presumably, this is why Moscow has had enough of Crimean Solidarity.

The first months of 2019 saw the arrest of several prominent Crimean Tatar civic journalists and bloggers on terrorism charges. In March, Remzi Bekirov, Osman Arifmemetov, Rustem Sheikhaliyev, and Marlen Mustafayev were all arrested — all of these men had taken photos or livestreams of security services’ raids on Crimean Tatar houses and hearings in courtrooms (Bekirov is also a correspondent for the Russian independent news website Grani.RU.) On 3 April, Crimean Solidarity issued an appeal to Ukraine and the world for assistance, warning of a complete “cleansing” of opposition and independent media in Crimea. “In response to the never-ending arrests, searches, and court cases, citizen journalism had to be created in Crimea. This happened under duress: people understood that without information, there was no other way to defend the peninsula from repression,” read the statement.

“They had started targeting Crimean Solidarity in 2017, when they became too independent and too prominent,” explained Tasheva. “On 27 March 2019, when mass searches of Crimean Tatars’ homes were launched, basically all those detained with a handful of exceptions were activists from Crimean Solidarity. And then in March 2018, Nariman Mehmedeminov, who was an organiser for Crimean Solidarity, was arrested.”

Lokshina stressed that the Crimean Solidarity's information was invaluable to the work of human rights defenders. She continued that while the Russian authorities have pursued Hizb-ut-Tahrir members elsewhere, in Crimea they do not necessarily target Crimean Tatars who are particularly religious. Instead, she says, they go after “those who happen to be particularly and vocally active in opposing the occupation. There is only one way to view this, and that is that these bogus arrests were aimed at silencing Crimean Solidarity and intimidating the activists into silence,” concluded Lokshina.

Alimdar Belyalov is one of those activists. Since he fled the peninsula two and a half years ago, he has not remained silent. Belyalov, now based in the Ukrainian capital of Kyiv, says that he has been unable to return to Crimea for six months. He says that the voluntary and decentralised nature of Crimean Solidarity ensures its survival.

The structure of our organisation is ideal for mutual support. For example, at the moment we have 68 political prisoners. Every political prisoner needs around 200 dollars a month, in order to clothe and feed himself. Altogether, there are 180 children; the minimum amount needed for each child is $100 a month. That all comes to over $30,000 a month. That money is collected by the people. There are no flows of funding. The people won't leave their brothers and sisters in penury. From that example you can see that the structure isn't falling apart and won't fall apart. If they imprison one of us, ten will come out [in support.] If they imprison ten of us, 100 will come out. If they imprison 100, then 300 will come out.

As Belyalov puts it, the grassroots and decentralised nature of Crimean Solidarity is precisely what makes it such an effective civic movement. But these are not new tactics to the Crimean Tatars; in the latter decades of Soviet rule, a vibrant and vocal Crimean Tatar dissident movement emerged, demanding that Moscow recognise their mass deportation in 1944 as an injustice and allow them to return to the peninsula. The tactics are not new, and neither, as Crimean Tatar refugees have told this reporter, is the experience of state repression. What's new are the devices allowing the Crimean Tatars to document their experiences.

Some people have a camera, others have an iPhone. Whatever somebody has, he uses it to film and starts sharing that information. But the thing is that these guys, the streamers, are under the greatest threat. Because if, say, you try to stream or photograph there, there is a great probability that you'll end up in prison. Any form of dissent which the state doesn't like is suppressed. Either they'll eavesdrop on you and photograph you, or you'll end up in jail. These guys are volunteers, who are ready to sit behind bars for the sake of justice for their people. And the more injustice there is, the more of these volunteers there will be. I would hazard a guess that there are over 100 of them today.

Whatever happens, Crimean Solidarity will be watching. And so, by extension, may the whole world.