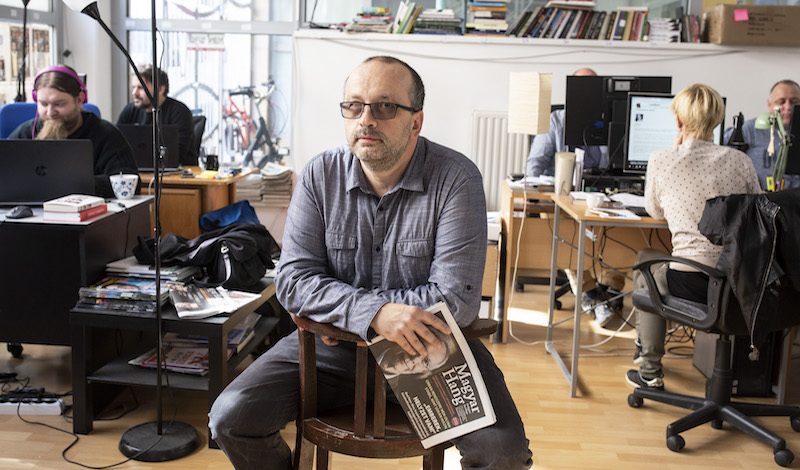 It's a wild ride being a journalist in Viktor Orbán's Hungary.

Hungary now ranks 73rd out of 180 countries surveyed in Reporters Without Borders’ World Press Freedom Index [1], having dropped 50 places since Orbán and his Fidesz party first took power in 2010. Over the past three years, the country has lost two of its leading daily newspapers. On 8 October 2016, the new Austrian owners of Népszabadság suddenly announced [2] that the popular left-leaning publication had been closed due to poor sales. Journalists arrived to work to find themselves locked out of the building. Given that the newspaper had one of the country's highest circulations, observers were quick to suggest that its closure had been coordinated with Fidesz [3].

Last April, the owner of Magyar Nemzet announced that the newspaper would be closed [4]. The conservative-leaning daily, founded in 1938, was one of several media outlets owned by the influential tycoon Lajos Simicska [5], previously a staunch supporter of Fidesz. But as Simicska started to fall out with Orbán [6] in 2014, Magyar Nemzet took a more critical line towards the government.

Magyar Nemzet was closed shortly after Fidesz won yet another majority in the parliamentary elections of 2018. Analysts supposed that the move signalled Simicska's acquiescence to the new order, and a step back from an ugly confrontation. Magyar Nemzet is no more, or at least not the Magyar Nemzet its readers and journalists knew — in February, 2019 the name was assumed by the pro-government right-wing newspaper Magyar Idők [7].

However, the journalists of the original Magyar Nemzet decided to stay journalists. After briefly experimenting with publishing their own “samizdat [8]” Magyar Nemzet, they founded the independent weekly Magyar Hang [9] (Hungarian Voice) in May 2018. Despite multiple appeals, the Magyar Hang journalists received little support from what was left of Magyar Nemzet. They had to start from zero.

I spoke with Csaba Lukács, managing director of Magyar Hang and a former correspondent for Magyar Nemzet, on the sidelines of N-Ost [10]‘s 2019 media conference in Chișinău, Moldova. The interview has been edited for length and clarity.

Maxim Edwards: Could you tell us more about the circumstances of your leaving Magyar Nemzet and your decision to found Magyar Hang?

Csaba Lukács: I had been a senior journalist for Magyar Nemzet for nearly 20 years. The second day after the elections last April, I got an email from the editor-in-chief telling us that everybody must come to to his office for an announcement. The announcement was that it would be the last issue of Magyar Nemzet. I was the lucky one who got to write the very last editorial [11]. The title was “Vége” (“the end”), so I had to say goodbye to the readers. We immediately thought that we had to do something, to start a new newspaper from scratch. But unfortunately the old owner wouldn't give us the subscriber list, so we could not tell the good news to our former readers. As well as my work as a journalist, I was working for an NGO which sends doctors and paramedics to disaster areas. So when they stopped Magyar Nemzet, everybody was looking at me and said “you're used to catastrophic situations, so you have to be our director.”

So we had to start from zero. We had only used laptops and computers, all the furniture was donated. The very first issue of Magyar Hang was made in my living room, because we had no office at the time. For the first three months, no-one got a salary. I asked everybody to treat their work as an investment in the future newspaper. Unfortunately, we could save 25 journalists out of 100 from Magyar Nemzet, which had been the largest daily newspaper at the time. It's a miracle that we've survived; we're even growing.

ME: I understand that much advertising revenue is completely unavailable for political reasons. What other sources of funding are open to you?

CL: We had nothing for the very first year. Of course, there are market [not state] advertisers as well, but they are afraid that they'll be punished by the government if they spend money on our newspaper. But we had agreements with some small Hungarian companies who already have problems with the government so have nothing to lose. But until now, the percentage of our income which isn't directly from readers is less than 5 per cent.

It wasn't easy to get around the reluctance of some shops or fuel stations to sell us, but some do. At this moment we're present in nearly 2,800 shops in Hungary, and we now sell 8,000 copies every week. Our circulation recently reached 12,000.

Everywhere else, newspapers have more subscribers and sell fewer copies on the market. Unusually, we sell three times more than our number of subscribers. In Hungary, we get telephone calls from readers asking us ‘if I subscribe to your newspaper, will [ruling party] Fidesz know about it?’ We can't be 100 per cent sure, as there is only one distribution company, Hungarian Post, which is state-owned.

ME: Founding a print publication is an expensive, slow, and time-consuming business. Why did you prioritise print?

CL: Well, I was working for a conservative newspaper and we know that our readers were old-fashioned people. They like to hold a newspaper in their hands. In rural areas and in the cities there are many older people who aren't used to using Facebook or the internet. Unfortunately in Hungary there is no working model to earn money from online media, but print means immediate cash.

Actually, there was no Hungarian company which was brave enough to print us, so we're printed in Bratislava, in Slovakia. When we left Magyar Nemzet, we still had a rolling contract with the printing company; but when they realised we were trying to print something against the government, they said ‘we have no capacity.’ So Slovakia was the best option. It's close, and there's no Schengen border, so the trucks can't be stopped by the Hungarian authorities for some administrative reason.

ME: So Magyar Nemzet was a Christian conservative, centre-right paper. Many people outside Hungary don't always understand that there are a significant number of conservative Hungarians, not just liberals or leftists, who are also very scared about the direction their country has taken.

CL: More than half of our readers voted for Fidesz ten years ago. We're focusing on the ‘Orbán orphans’ who supported them but are now disappointed, that's our biggest audience. Orbán and the government give some advertising contracts to Népszava [12], a left-leaning newspaper, and Magyar Narancs [13] [a weekly liberal-leaning magazine], just so that they survive. They have to show that they exist, that there is pluralism. But they see us as traitors; they don't want people who ‘betrayed the conservative ideal’ to stay alive. That was even mentioned directly during a TV show; on Echo TV, then part of the state propaganda machine, a political analyst literally said my name and that of our editor-in-chief György Zsombor, saying ‘they are traitors, and in times of war traitors have to be executed.’

We can never know when they'll decide that it's wartime.

ME: You still have full-time reporters working for you, but to what extent do they have access to state institutions? Can they still get quotes from government ministers?

CL: Nope. In the very first year we were not even allowed to go to the press conferences held every two weeks by Gergely Gulyás, the head of the prime minister's office. Our colleagues in independent media always ask on our behalf why we're not allowed. Eventually, about a year ago, we gained access. But that's the only government press conference we can get into, and we're always the very last people who get to ask questions. We have over 500 questions for government officials, even to state-run hospitals about basic stuff, but there are no answers. There is a law in Hungary that they have to answer the media, but they don't respect it.

Very often it happens that they steal our stories. If you send questions, they send the answers back to propaganda media or they lie.

ME: But regardless of whether they lie or not, you still have to quote those lies to have any hope of being seen as objective. How does that harm your readership?

CL: We ask them, they don't answer, then when we publish they say that they were not asked and that we are ‘fake news.’ Mister Gulyás says that the reason the government doesn't answer us is because we're ‘not proper media.’ But we are a legally registered media outlet in Hungary, we fulfil all the requirements.

ME: What is the future of press freedom in Hungary?

CL: They will close or buy other outlets. I think the next one will be HVG [14], which is now the biggest weekly political magazine on the market. I'm sure that after the local elections they will try to ‘catch’ it. They want to have the leaders in every section in their hands. The foundation [15] linked to Orbán's oligarch Lőrinc Mészáros has 500 media outlets, from one of the biggest commercial TV channels to commercial radio, regional newspapers, sports newspapers, magazines… I think 80 per cent of Hungarian media is in their hands, but they're trying to go for 100 per cent.

ME: It seems to me that journalists are some of the first targets when governments lean towards this kind of right-populism; it's very easy to represent them as enemies of the people.

CL: Let's be very honest: we're not in danger. We're not like Turkey yet, so we won't be jailed. We're not like Russia yet, so we won't be killed. But we are in an extremely vulnerable position in terms of money. We can't earn a lot of money, and if, say, your close relatives or your wife is working for the government they will be fired. They are watching all of us. They know who our relatives are. In my family, we even had to agree never to discuss politics at Sunday lunch because some of my close relatives have said that I am a ‘traitor who is paid by [George] Soros.’ And to be honest, we are paid by [George] Soros, because the Central European University [16] has one subscription to Magyar Hang. So we receive 450 Forint ($1.48) every week from Soros’ money!

ME: What do you think other European societies can learn from Hungary's rapid decline in press freedom?

CL: Everything can change, immediately. Democracy is vulnerable, and if somebody, a winner, chooses not to respect certain gentleman's agreements, he can change everything to his will. We never expected that things could end up this way in Hungary, thinking of 1956 when the people rose up against the Soviet Union. And when we changed the system in 1989 we thought that [dictatorship] had gone forever. But one strong politician came, he won more than 66 percent in three parliamentary elections. He got a constitutional majority, he changed the laws, he changed the election law which now makes it almost impossible to defeat Fidesz.

He can do whatever he wants, and we don't know when that will change. So we have to be prepared to survive like this for a long time.