Can Islamic veils protect school girls from any ‘unethical incident’? 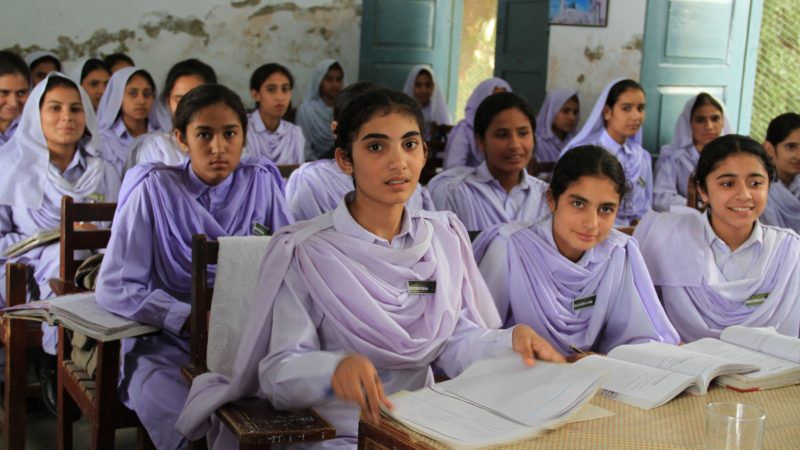 Girls in a school in Khyber Pakhtunkhwa, Pakistan. Image via Flickr by DFID. BY SA 2.0.

A shuttlecock burqa is the most concealing of all Islamic veils. It is designed to cover a woman from head to toe with a mesh net eyepiece allowing them to see. While this style of burqa is often associated with women in Afghanistan and a few tribal areas of Pakistan, a recent photo of shuttlecock burqa-clad students from an area of Mardan Khyber Pakhtunkhwa (KP) in Pakistan, has caused an uproar on Pakistani social media and stoked criticism of growing conservatism in schools.

According to available information, Muzafar Shah, a former district council member from the ruling Pakistan Tehreek e Insaf party (PTI) distributed 90 shuttlecock burqas to female students. The councilor said that his action was inspired by the recent directive from Ziaullah Bangash, the provincial advisor on education, who directed school girls to observe purdah (the practice of female seclusion).

Khyber Pakhtunkhwa, formerly known as the North-West Frontier Province (NWFP) is located in northwestern Pakistan along the international border with Afghanistan. This area has been in the centre of militancy and terrorism as it became a refuge to over five million Afghan refugees pouring into Pakistan after the Soviet invasion of Afghanistan in 1979. In 2013, the provincial politics shifted towards the right-wing national conservatism when the Pakistan Tehreek e Insaf party (PTI) led by Imran Khan was able to form the minority government.

A number of people reacted to this news and demanded action against this latest move.

Sanna Ejaz, a journalist from Khyber Pakhtunkhwa said on Twitter:

Translation: Mardan is my ancestral home and we do not wear burqas. Elderly women wear plain shawls while girls shawls have some embroidery on it. This is the doing of PTI government, by distributing burqas from development funds.

How students are going to sudy wearing these #burqas, at 40'C in summer, we don't even have air conditioning in government schools in Pakistan.@PTIKPOfficial@ImranKhanPTI@ShireenMazari1https://t.co/wrekV0lgML

However, there were people who supported the decision to supply the girls with shuttlecock burqas. Women who resist or do not wear the veil are considered too westernized by the conservative community members in Pakistan.

This step is taken only in KP province not in other provinces.This type of burqa is the culture of pakthoon and also pathans live in KP and they all are muslims.I am studying in government college no such thing happen there.Please stop this propaganda against Islam and PAKISTAN.

Contrary to those arguments, Gallop Pakistan recently released a poll that found the burqa to be a less popular choice for women in Pakistan:

Earlier in September, Ziaullah Bangash, Adviser to Chief Minister on Elementary and Secondary Education of Khyber Pakhtunkhwa, issued a notification making it mandatory for female students of provincial government schools to wear a chaddar, an abaya or gown to protect them from any ‘unethical incident’ and remove the doubts raised by parents about the safety of their children. Although the directive was almost immediately overturned, Muzafar Shah purchased the shuttlecock burqa's citing Bangash as inspiration for the decision.

Despite this, after netizen comments turned against Shah, Bangash did a complete u-turn and denounced Shah's actions:

This step was taken without our knowledge and permission. KP government is looking into this matter and action will be taken against him.

This double standard of the government was also slammed on social media.

To prove how the order for wearing burqa was being justified using flawed logic that burqas will keep girls safe, people on social media posted pictures of two recent incidents that took place in Pakistan. One of them was the rape and death of Ayesha Zulfiqar who was wearing an abaya (a type of burqa).

Burqa? The coffin doesn't protect women in Pakistan from getting raped. I just saw this video, and it made me feel physically unwell. It's not on women to defend themselves; men need to do something about how our species functions around women.https://t.co/vYNhSX1Swf

Another incident mentioned was caught on film in D.G Khan where a passerby groped a woman in an abaya on the road.

These show that covering women in an abaya or chaddar is actually not protecting them from harassers. It seems that strict laws, sensitization of legal and police fraternity, awareness and speedy justice is the way to resolve the issue.

Caribbean  19 hours ago
Cancel this reply