'The boys realize that they can't betray their ideal' 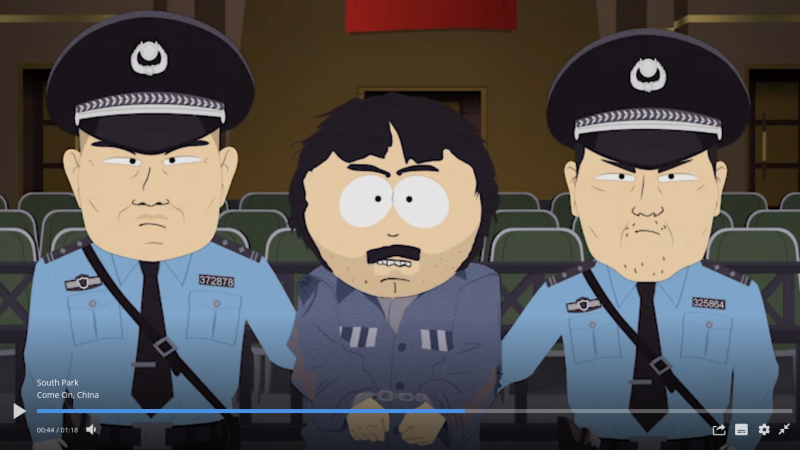 The producers of the American animated sitcom South Park issued a sarcastic apology to China after Beijing censors deleted every trace of the cartoon on all video streaming services and social media platforms within mainland China.

The apology, published on October 7, mocks the American National Basketball Association (NBA) for bringing “the Chinese censors into our homes and into our hearts”. The humorous statement follows a global online row caused by a tweet posted by Daryl Morey, the general manager of Houston Rockets, a team playing in the NBA, in which he supports the Hong Kong protesters for more political freedom and oppose Beijing policies.

What triggered the Chinese censors’ action is the latest episode of the series, called “Band in China”. It depicts one of the main characters, Randy, on a business trip in China during which he lands in jail where he meets Disney characters including Winnie the Pooh and Piglet.

The episode, which mocks Hollywood for its self-censorship practices in China, was released on October 2, just one day after the 70th anniversary of the foundation of the People's Republic of China.

The episode shocked some of the cartoon's fans both inside and outside China for its violent scenes, which is typical of the series since its debut in 1997.

The story goes as far as to criticize China's “forced confession” practices by having Randy compelled into confessing that he murdered Winnie the Pooh, an online meme of the Chinese President Xi Jinping:

During the episode China tasks the gang with having to kill Winnie the Pooh. In real life, Winnie the Pooh is defacto banned in China due to memes comparing him to China's president pic.twitter.com/Xvj7ZYMO0M

Clearly, cartoon’s creators Trey Parker and Matt Stone had anticipated the Chinese internet ban. In fact, as if the message of Randy's China experience was not clear enough, South Park made another new episode of “Band in China” available for free on October 3:

Kyle returns to South Park and gives Stan a great idea, but the boys realize they can't betray their ideals. Watch the all-new episode, “Band In China” for FREE – https://t.co/oktKSJvjxS #southpark23 #fingerbang pic.twitter.com/Bq5K6gWjOV

Like the NBA, we welcome the Chinese censors into our homes and into our hearts. We too love money more than freedom and democracy. Xi doesn’t look just like Winnie the Pooh at all. Tune into our 300th episode this Wednesday at 10! Long live the Great Communist Party of China! May this autumn’s sorghum harvest be bountiful! We good now China?

It all started on October 5 when Daryl Morey posted an image on Twitter of Hong Kong protesters’ rallying cry, “Fight for freedom, stand with Hong Kong”. Despite the fact that he later deleted the tweet, his social media gesture was captured by Chinese state media outlets including Global Times and People’s Daily and circulated on Weibo. Both outlets act as mouthpieces of the Chinese Communist Party and framed the gesture as being supportive of a “separatist movement”. As anticipated, an online campaign demanding a public apology was organised in China.

In response to the Chinese uproar, Morey explained that his tweets only represent his views:

2/ I have always appreciated the significant support our Chinese fans and sponsors have provided and I would hope that those who are upset will know that offending or misunderstanding them was not my intention. My tweets are my own and in no way represent the Rockets or the NBA.

NBA also issued an official statement in an effort to put the fire off in China:

Recognize that [Morey's views] have deeply offended many in China, which is regrettable.

However, the statement backfired with NBA's fans in the U.S. A US presidential candidate, Beto O’Rourke, deemed it an “embarrassment” while Florida Republican Senator Marco Rubio also accused the NBA of throwing Morey “under the bus” to “protect NBA’s market access in China”:

This is bigger than just the @NBA. It’s about #China’s growing ability to restrict freedom of expression here in the U.S.

On the other hand, China considers the NBA's apology as insufficient, thus all Rockets’ brand products were taken down from Chinese online shopping platforms including Taobao, Tian Mall, and Jingdong. China state media, including China Central Television and Internet giant Tencent have also announced the suspension of NBA broadcasts following Morey's tweet.

While the creators of South Park have made it clear to China that they will not betray their ideals, NBA decided to accept the ideological framework that China imposes on the rest of the world — which also indicated in the Open Letter to NBA fans by the owner of the Brooklyn Nets Joseph Tsai who agrees with Beijing labelling the current protests in Hong Kong as a defacto separatist movement, and urged NBA fans to understand Chinese history.

A large number of foreign brand companies have recently apologized to China over Hong Kong tensions. As the conflicts deepen, more global corporations will be forced to make a choice between upholding their values or bowing to China's set of values. In this game, there is no second chance: while the NBA tried to follow the middle way, it ended up being slammed by both sides.