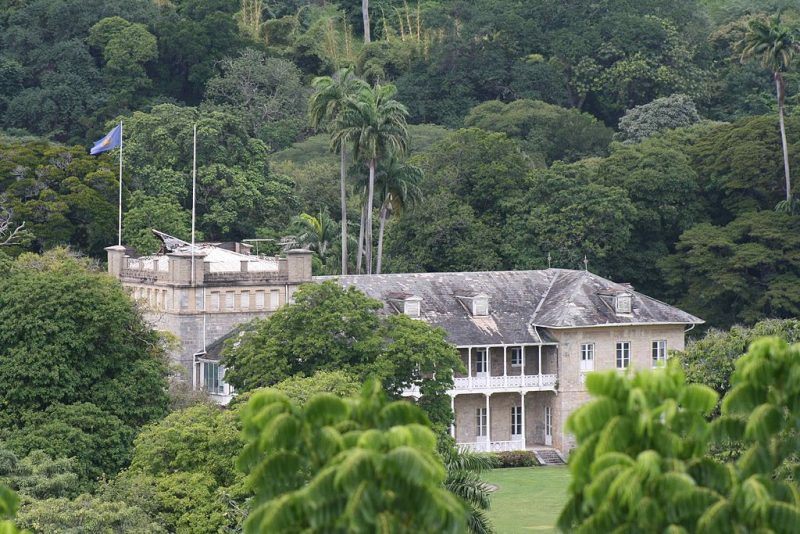 The President's House, Trinidad, taken November 19, 2010, by
Albert Sydney, used via Wikimedia Commons under the terms of the GNU Free Documentation License.

A recent decision by the president of Trinidad and Tobago, Her Excellency Paula-Mae Weekes, to prohibit unmarried partners of guests to attend official events at President's House, has caused a widespread public backlash.

While in the midst of preparations for the country's National Awards ceremony on September 25, 2019, a number of state officials went to the press to express their dismay over the office of the president's decision.

According to reports, the office of the president does not allow state officials to be accompanied by partners with whom they are not legally married for any event held at the President's House — a stance which critics deem “backward”.

The Trinidad and Tobago Council of Evangelical Churches was quick to weigh in on the issue, saying that citizens have forgotten the sanctity of marriage and that the word of God is “supreme”. In a statement, the organisation added, “Marriage is not just a legal contract as presented by the secular world, but a divine covenant established by God.”

Although President Weekes has not provided a rationale for her decision, this has not stopped people from assuming that it is based on religious grounds. Many social media users, across various platforms, shared their consternation, with some interpreting the issue as a matter of the president pushing her own religious agenda onto citizens constitutionally entitled to religious freedom:

President Paula-Mae Weekes really disappointed me when she brought religion into the discussion. It’s not right to impose your religious values onto others.

One Twitter user reminded the president about her role as a servant of the people:

Respectfully acknowledging your position your Excellency. But we are talking about an invitation to the “people's” house. Not a passage into heaven.

Judging by the tone of online discussions, many people felt that religion had no place in the political arena, especially in a diverse country like Trinidad and Tobago:

Further proof that our leaders are backwards and religious nutjobs.

Many public officials and members of the government who attended the event voiced their displeasure over the president's stance. Given that common-law unions are legally recognised in Trinidad and Tobago — as well as the fact that the country's high court ruled against the discrimination of same-sex couples in a landmark decision back in April 2018 — detractors suggest that the president's position is outdated and lacks both inclusivity and cultural sensitivity.

Dubbing the move something from the “Victorian era”, former head of the public service, Reginald Dumas, asked why the president considered this a relevant policy:

Not merely in 2019 but in a society like this where there are lots of common law relationships and it is virtually the norm. What, therefore, is the aim the President had in mind? To achieve what exactly? I don’t know.

Janine Charles-Farray, who attended the same secondary school as the president — the alumni of which rejoiced at her inauguration — suggested in a public Facebook post that perhaps the president was the wrong target to rail against:

I'm all for plus-one invitations whether wed or unwed, but […] near-inconsolable upset over Common Law relationships not recognized at State Functions???…wow.

If it's one thing you learn when you go to Bishops is which battles to fight. Doh beat up Madam President. […] I can't see how one can argue that the office and the figurehead is a waste of money, and in the same breath say stormers must be wined and dined too. Make up your mind, T&T!

Beyond the witty school bashing, memes and the single-female-President shaming, which we know is a favourite(!!!) …is this a frugality issue? A security issue? Is it an event management issue? Pure colonial hogwash? We not really discussing anything here, just jamming the President for maintaining the rules that existed in the office before she even got there.

A string of disagreement appeared on the thread. Some commenters asserted that the post simply defended the president as an example of alumni closing ranks.

Weekes, who has been in office since March 2018, is the country's first female president. Her role as pioneering individual clashes with her stance on this issue, which has put her at the forefront of a national discussion about tradition and progress.

However, even as citizens clamour on Twitter and Facebook for an explanation, President Weekes has yet to make an official statement about her decision.

Update: October 11, 2019 — The Office of the President issued a statement titled, “Invitations to National Award Ceremony”, which said, among other things, that the Head of State does not issue invitations addressed to “Guest”, and that the method of compiling the list has remained the same for the last two years (a “formal tradition” to which the Office of the President subscribes). There are two categories of guests for the national awards — guests of the president, prime minister and awardees, for which marital status is not a consideration, and guests who are invited by virtue of the positions they hold, who are not entitled to bring a “plus one”; spouses are invited as a courtesy. It further clarified, “Legislation dealing with cohabitational relationships does not provide a guide to social invitations.” Some social media users still found the policy to be tone deaf.