'Additional restrictions are only likely to inflame tensions'. 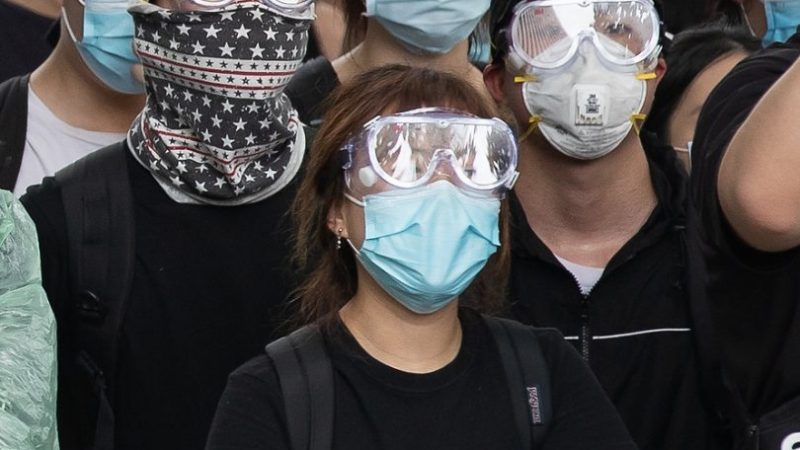 The following post was written by Kris Cheng and published on Hong Kong Free Press on October 4, 2019. It is republished on Global Voices according to a content partnership agreement.

The Hong Kong government has invoked the Emergency Regulations Ordinance (ERO) in order to implement a law banning the wearing of face masks at protests.

The law will ban protesters from covering their faces fully or partially during protests. Anyone who wears a mask at lawful rallies and marches, unlawful or unauthorised assemblies, or at riots could be sentenced to a year in jail and a fine of HK$25,000 (US$3,180). The law exempts people wearing masks at protests for professional, religious, medical or other work-related reasons.

Additionally, the law states that anyone who disobeys a police order to remove a mask could be sentenced to six months in jail and a fine of HK$10,000 (US$1,200). The definition of “facial covering” includes not only masks, but also face paint and other such coverings.

The legislation comes into effect starting at midnight on Friday 4 October. It was announced after a special meeting of the Executive Council on Friday, by the de facto cabinet of Chief Executive Carrie Lam.

“The decision to enact an anti-mask law is not easy one, but it is a necessary decision considering the situation today,” Lam said.

Hong Kong is “not in a state of emergency” despite the enactment of the law, she added.

When asked if the move was approved by Beijing, Lam claimed there was “no such thing as the Central People’s Government approval” for such a decision. “It is something handled within Hong Kong under ‘One Country, Two Systems,'” Lam said. She added that her trip to Beijing on October 1 was “very brief” and she had no interaction with Chinese officials on the mask ban. 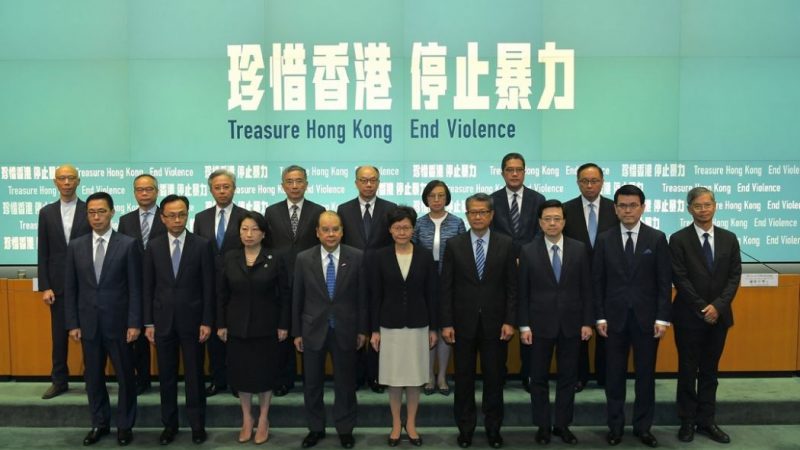 The Emergency Regulations Ordinance (ERO) is a colonial-era law that gives the chief executive unlimited power in the event of an “emergency or public danger.” Introduced in 1922, this is the first time the ERO has been used since the 1967 leftist riots.

A government source told the pro-Beijing Sing Tao Daily that the government expects that protesters would not obey the law, but that for some it may have a deterrent effect.

Hong Kong has experienced over 17 weeks of protests sparked by the government’s soon-to-be-withdrawn extradition law. The sometimes violent demonstrations have evolved into wider calls for democracy, police accountability, amnesty for those arrested since June, as well as other community grievances.

The latest development came after the most violent day of protest Hong Kong has seen since the beginning of the movement, as police fired six live rounds of ammunition on October 1. An 18-year-old student was shot in the left lung by one officer. Since then, district-level protests have occurred nightly.

The new law banning masks has taken into account human rights concerns under Hong Kong law, which are not absolute and can be limited, said justice chief Teresa Cheng on October 4.

The legislation will not affect Hongkongers’ freedom of assembly, as they can still exercise their rights when not wearing masks, Cheng added.

Cheng said the law has “struck a balance” between Hongkongers’ rights and the need to help police enforce the law, so the restriction was a “proportionate” one under the law. The use of the ERO is not the same as Hong Kong entering a state of emergency, Lam said, noting that the name of the law has caused some confusion.

When asked if the government will ban police officers from wearing masks as well, Secretary for Security John Lee said officers must wear suitable protective gear. “When police officers execute their duties… we have ways to identify them,” he said, addressing concerns that police may be hiding their identities.

The Civil Human Rights Front (CHRF), an alliance of 50 NGOs which acted as the organiser of mass marches, called the ERO a draconian law from the colonial times. The CHRF said that:

Once invoked, the Carrie Lam government would be declaring the death of ‘One Country, Two Systems’, and that Hong Kong is now a colony under Mainland Chinese rule. This old severe colonial law must be abandoned to keep the government in check and stop it from persecuting Hong Kong residents.

If the anti-mask law, once applied, will threaten personal safety and the freedoms of expression and religion. The primary reason for wearing masks and industrial respirators is for protection from tear gas. It is also a political gesture. Without carefully examining practicalities, such laws would also impede religious practices that are under the protection of the Basic Law.

It said the Hong Kong police should be the first to stop wearing masks and show their identity, following incidents in which they used “excessive and lethal force.”

The CHFR also said the government should respond to the public’s demands, and not further crack down on protests.

Activist Lester Shum and the “King of Judicial Review” Kwok Cheuk-kin said on Friday that they would file legal challenges against the anti-mask law.

Hong Kong authorities should be working to create a political environment in which protesters do not feel the need for masks—not banning the masks, and deepening restrictions on freedom of expression.

Chief Executive Carrie Lam needs to agree to an examination of excessive force by police and to resume the process toward universal suffrage. Additional restrictions are only likely to inflame tensions.