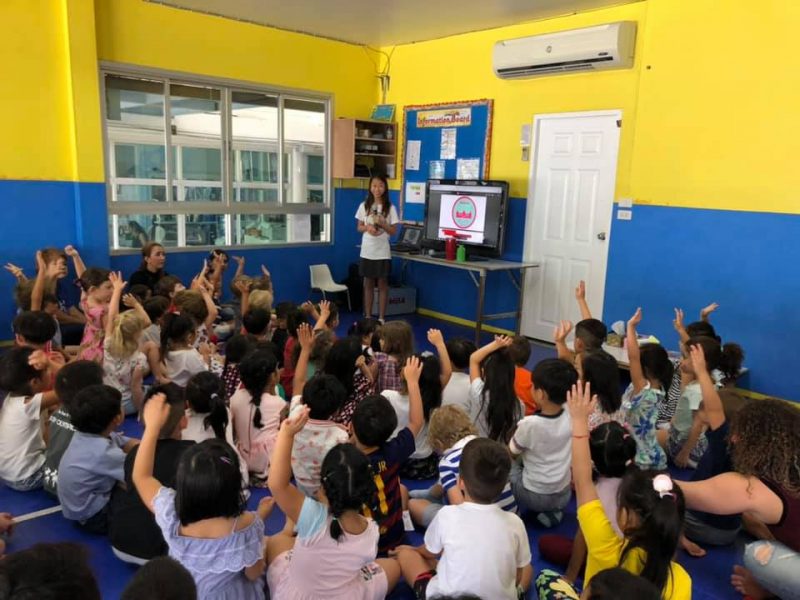 12-year-old Ralyn ‘Lilly’ Satidtanasarn was among those who joined a ‘die-in‘ [2] protest on 20 September 2019 in front of Thailand’s Ministry of Natural Resources and Environment to symbolize the worsening climate crisis. It was part of the global climate strike initiated by mostly young people around the world to highlight [3] the need for urgent action in order to reverse the rapid warming of the planet.

Lilly is known in Thailand for advocating [4] the reduction in the use of plastic. She has been talking to officials, corporate bosses, and civic leaders in the past four years about the pollution caused by single-use plastic.

Her efforts have been successful in drawing attention to the alarming plastic waste in Thailand. And her advocacy has been acknowledged in persuading [5] a Bangkok supermarket to stop offering plastic bags for one day every week.

In an interview with the author via WhatsApp and facilitated by her family, Lilly said she was not sure whether she should call herself an environment advocate since she feels her work is more of a responsibility:

Lilly's concern for the environment was triggered when she saw plastic garbage on a beach during a family vacation when she was eight-years-old.

She shares some of the challenges and difficulties she encountered while reaching out to authorities and other leaders in society:

Adults think I’m doing homework or a school project. They didn’t take me seriously but I kept emailing them and now they take me seriously. I have meetings with them and present my ideas and I showed them what I have done so far. People will follow me not because I have an opinion or knowledge about something. People will follow me because I do it, I showed them I made the change.

Many media reports describe Lilly as the Greta Thunberg of Thailand, referring to the 16-year old Swedish climate activist who has become a popular icon of the global climate strike. This is Lilly’s reaction:

Greta is very important to me. She symbolizes that kids have power to change and I have believed that for a long time already. I don’t think I’m Greta of Thailand. I’m my own person. So, I’m Lilly. I live in Thailand and I’m a citizen of the world. The earth is what we all have in common.

This is Lilly’s reminder to Thai officials:

I think if the government agrees that our environment is important then they should declare that we are in a crisis in all parts of Thailand. We have serious droughts and flooding for decades. So many sea creatures are dead from eating plastic. We have only 34% of the rainforest left in Thailand. We are depleting fossil fuels. There won’t be any left. And we have so many new factories and increasing carbon emission. So, with all the issues we are facing, we should declare Climate Emergency for Thailand.