Climate activists in the Netherlands: “We need hope through action” 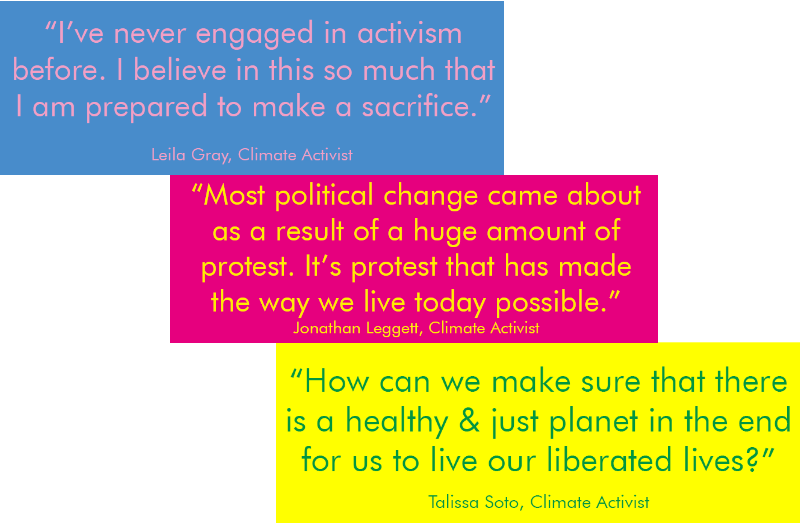 “You all come to us young people for hope? How dare you.” Greta Thunberg spoke with anger and passion about the urgency for world leaders to take swift action on the climate emergency the world faces. She’s not the first young person to beg for action, or the first activist. She is one of many. For decades and decades, activists and scientists have warned us about the impact of industrialization and consumerism on the ecosystem. Yet it is Greta's generation that will experience the most dramatic changes.

In the lead-up to the UN Climate Action Summit, people all over the world have been joining the students striking for action on the climate emergency. For this article, I spoke with three climate activists in the Netherlands about their activities and motivations.

“I never felt I’d be willing to be arrested. But I am now.”

Leila Gray speaks six languages. She’s an actor and a transplant to the Netherlands from the UK. In the past, she felt that there were plenty of people working on climate change solutions, so she didn’t have to:

“I went through that period of thinking that other people were working on climate change, so I didn’t have to. And then there were the fires in Indonesia around 2015. People were walking around with oxygen masks. Children were evacuated.”

Leila discovered that palm oil production was one of the key factors in the fires. She felt the obvious thing to do was demand that the EU end the import of palm oil.

If only it were so simple.

Instead, Leila discovered that eliminating palm oil meant replacing it with something else that would likely be as damaging:

“It’s not as simple as getting rid of something. The solution is not to replace. In the Global North we need to reduce our consumption.”

In 2018, she started following the activities of Extinction Rebellion (XR) in the UK. Their tactics and passion spoke to her: “I was stunned to see that many people, including young mothers, were saying, ‘I’m so scared for the future that I’m willing to go to prison to make change’.”

She found the XR group in the Netherlands and joined. “I’ve never engaged in activism before. I believe in this so much that I am prepared to make a sacrifice. I never felt I’d be willing to be arrested. But I am now.”

“…twice the opportunity for disruption”

“Frankly, I am absolutely terrified of the course we are heading on, and government inaction.”

As a student of climate change, he is especially concerned.

“In 1990, the UN was saying that we had to halt warming to 1 degree centigrade. We’re now at 1.1. The IPCC [The Intergovernmental Panel on Climate Change] is saying 1.5 is the absolute maximum.”

Jonathan adds that those numbers are conservative. 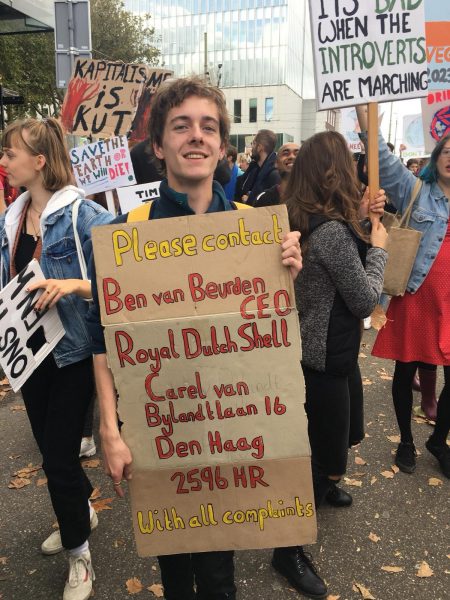 Jonathan Leggett at the Sept 27 Climate Strike demonstration in The Hague. Photo used with permission.

Unlike Leila, Jonathan has been involved in activism in one form or another since he was a child. Some of his earliest memories of protest are from the 2003 antiwar demonstration in London, which he attended on the shoulders of his parents, who are activists themselves. He notes that the appetite for activism is smaller in the Netherlands than in the UK, where he was born.

“One of the issues we’re having in the Netherlands as opposed to the UK is that there is not currently a strong culture of protest. This can work to our advantage, because we can think about new forms of protest. To a certain extent this frees us to be more creative.”

There's another advantage, as Jonathan points out:

“Having two capitals, Amsterdam and The Hague, means that we have twice the opportunity for disruption.”

I asked Jonathan if he was angry at previous generations for not doing more to address climate change.

“In some respects yes. But I know there were other issues that needed tackling. And I know there was a coordinated campaign to cast doubt on climate issues. So while I am angry that it hasn’t been dealt with sooner, I’m not angry at a whole generation. I’m angry at those people who purposely misled others and made sure that climate change was not addressed sooner.”

“What does it mean to decolonize the climate movement?”

Talissa Soto is a founding member of the Climate Liberation Bloc (CLuB). She started working in social justice activism at university. At the same time she was teaching a course on the politics of climate change.

“The more activism I did around social justice, I realized that climate change is going to hit the people who have been most impacted by colonialism and marginalization first and disproportionately. I asked myself, how can we make sure that there is a just and healthy planet in the end for us to live our liberated lives?” 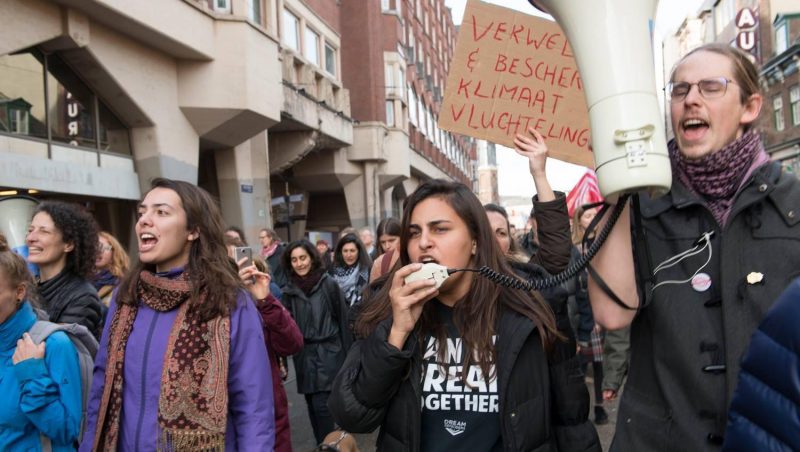 Talissa Soto photographed at a demonstration. Photo by Alex Bleu. Used with permission.

“What does it mean to decolonize the climate movement? What is it like to see the crisis as the result of 500 years of colonialism and colonial capitalism and plundering of resources? The climate emergency is not only about the future. It already exists for much of the population of the world.”

“We [CLuB] are trying to expose the iceberg underneath the discourse on climate change and work with groups that are doing feminist and anti-racist work and then bring it back into the mainstream climate movement. And there has been a response in the Netherlands. It’s rare that groups don’t say climate justice. It’s rare that groups don’t acknowledge the systemic nature of climate change.”

At times the work has left Talissa emotionally drained and too exhausted to engage.

“It’s hard getting your comrades to understand that they have to focus on racism and sexism too. It’s a lot of emotional labor.”

The work, however, has been worthwhile. Another founding member of CLuB, Chihiro Geuzebroek, has become a popular speaker in the Netherlands climate movement. The work of CLuB has been acknowledged by more mainstream organizations. Old school activists are coming around to the need for a focus on social issues and acknowledge that marginalized populations need to be centered in all climate activism.

This small success means that Talissa can change the focus of her activism.

“Now we want to work more with marginalized people inside the movement, and not focus on the mainstream. We’re working a lot more with queer people and people of color and women of color and black women now.”

“We need hope through action”

Talissa, Leila, and Jonathan have all found ways to transform their concerns for the future into action. Jonathan calls it “hope through action.”

“We need hope through action. Most political change came about as a result of a huge amount of protest. It’s protest that has made the way we live today possible. I just hope it’s not too late to be honest. I am heartened by the how quickly the climate movement is spreading. Look at the school strikes and how enormous they’ve become.  Just recently OPEC said that the school strikes are the biggest threat to the oil industry. All the CEOs of the different companies are hearing their children ask why are my classmates striking? And what do you answer?”

On October 7, 2019, there will be further demonstrations and civil disobedience to call attention to the climate crisis. Many groups and individuals are involved, including XR Netherlands. They will be protesting in front of the Rijksmuseum in Amsterdam and at many other locations. 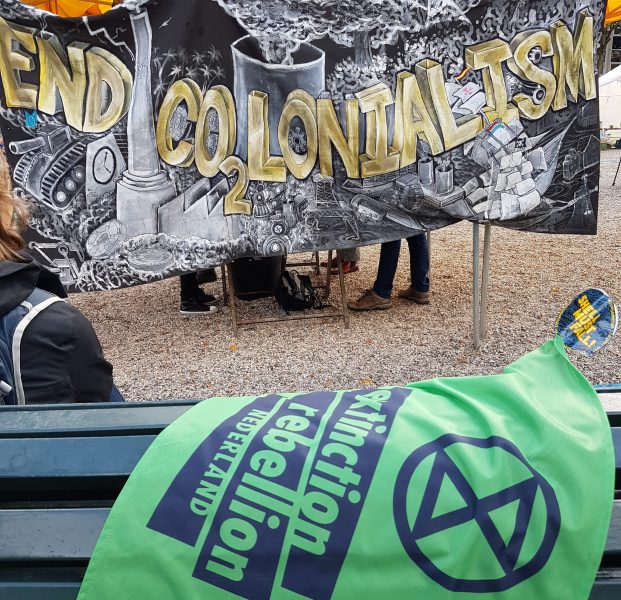