Can the 2019 presidential election alleviate rampant poverty in Afghanistan? 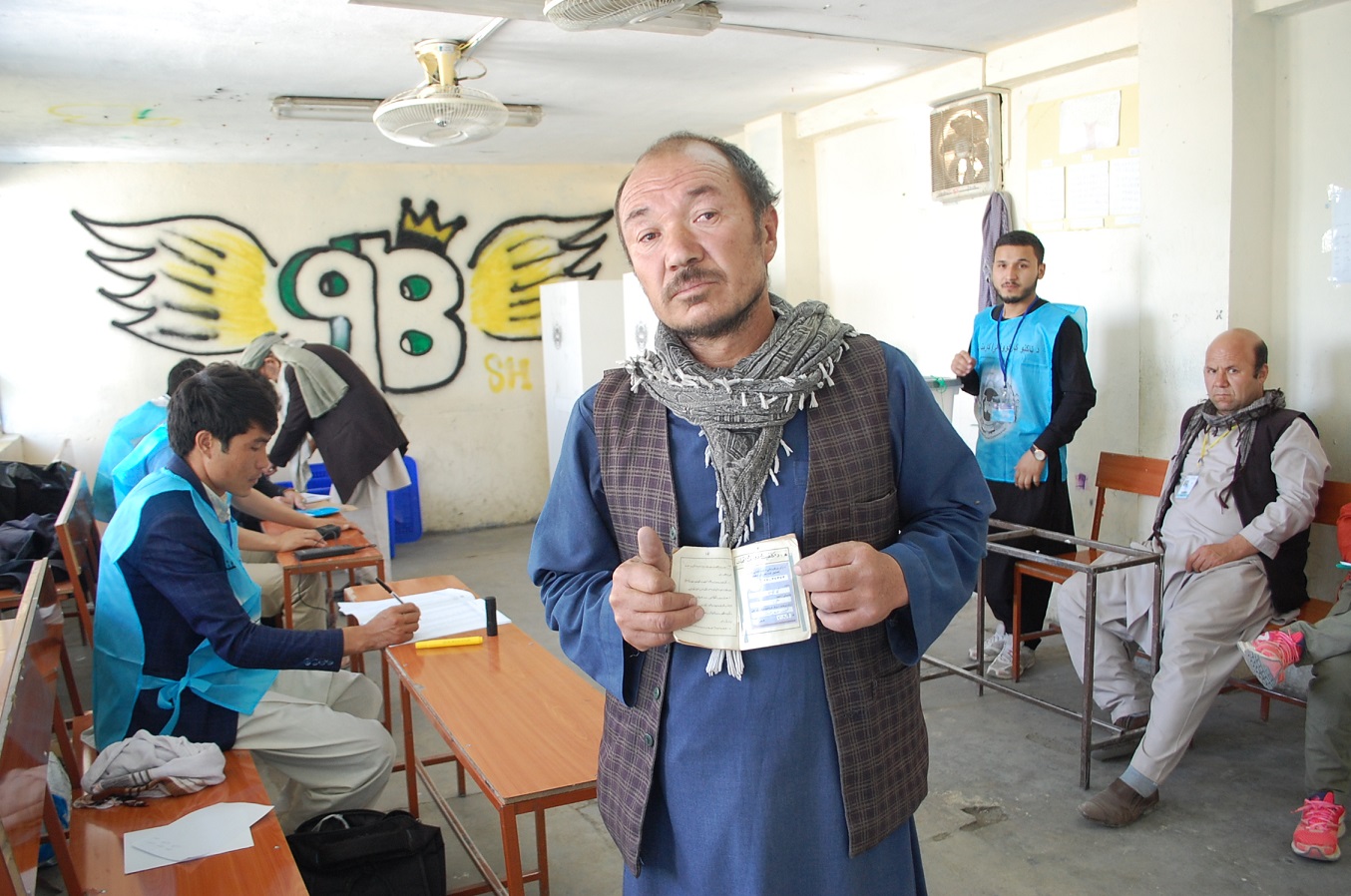 Manual laborer Mohammad Jan Hussaini came to cast his vote in the Afghan presidential election, but was told he could not, as the voting machine was unable to read his fingerprint. Photo by Ezzatullah Mehrdad, used with permission.

Mohammad Jan Hussaini is a daily laborer in Kabul who is determined to exercise his civic rights. On September 28, he showed up early at his polling station to cast his vote in the presidential election. But things didn't go as planned.

Hussaini, who at 35 looks more like 50, struggles and waits every day in his ragged clothes and worn-out shoes in the hope of getting a menial job. On election day he wandered for a few hours in front of the Marefat polling station in central Kabul. After standing in a queue for 30 minutes, he finally put his finger on the biometric device to cast his vote. The device did not recognize his fingerprint.

“Your fingerprint is damaged, you cannot vote,” an Afghan election officer told him. Refusing to take this for an answer, Hussaini requested to seek an explanation from higher ranking officers. Once again, he was told he couldn't vote.

Biometric machines were introduced last year in Afghanistan to prevent fraud. According to Hussaini, however, what happened to him on September 28 amounts to fraud. “I already feel powerless and the only thing I can do is vote,” he says. “Our situation is beyond hardship: the level of unemployment, elections marred by fraud, and the war.”

Afghans are deeply affected by a prolonged civil war in which 50 people lose their lives every day. An equally heavy burden is poverty: according to a Gallup Poll published in 2019, 85 percent of Afghans describe themselves as ‘suffering’, and none say they are ‘thriving’. The same source indicates that 90 percent of Afghans say it is difficult to get by on their household income, while 57 percent struggle to afford food.

A desperate desire for change is what drives people like Hussaini and 2.5 million other Afghans to vote for the person who will be running the country for the to next five years. “It is the last day of Ashraf Ghani [the current president who is also running for a second term],” Hussain explains. “Today I came to vote for my favorite candidate.”

Amina, a 53-year-old mother who lives in a rented house thanks to the income provided by her son, has a similar motive: “I have voted every time an election has been held. This time, I voted with the hope of bringing stability and security in the country, and that people could afford to eat.” 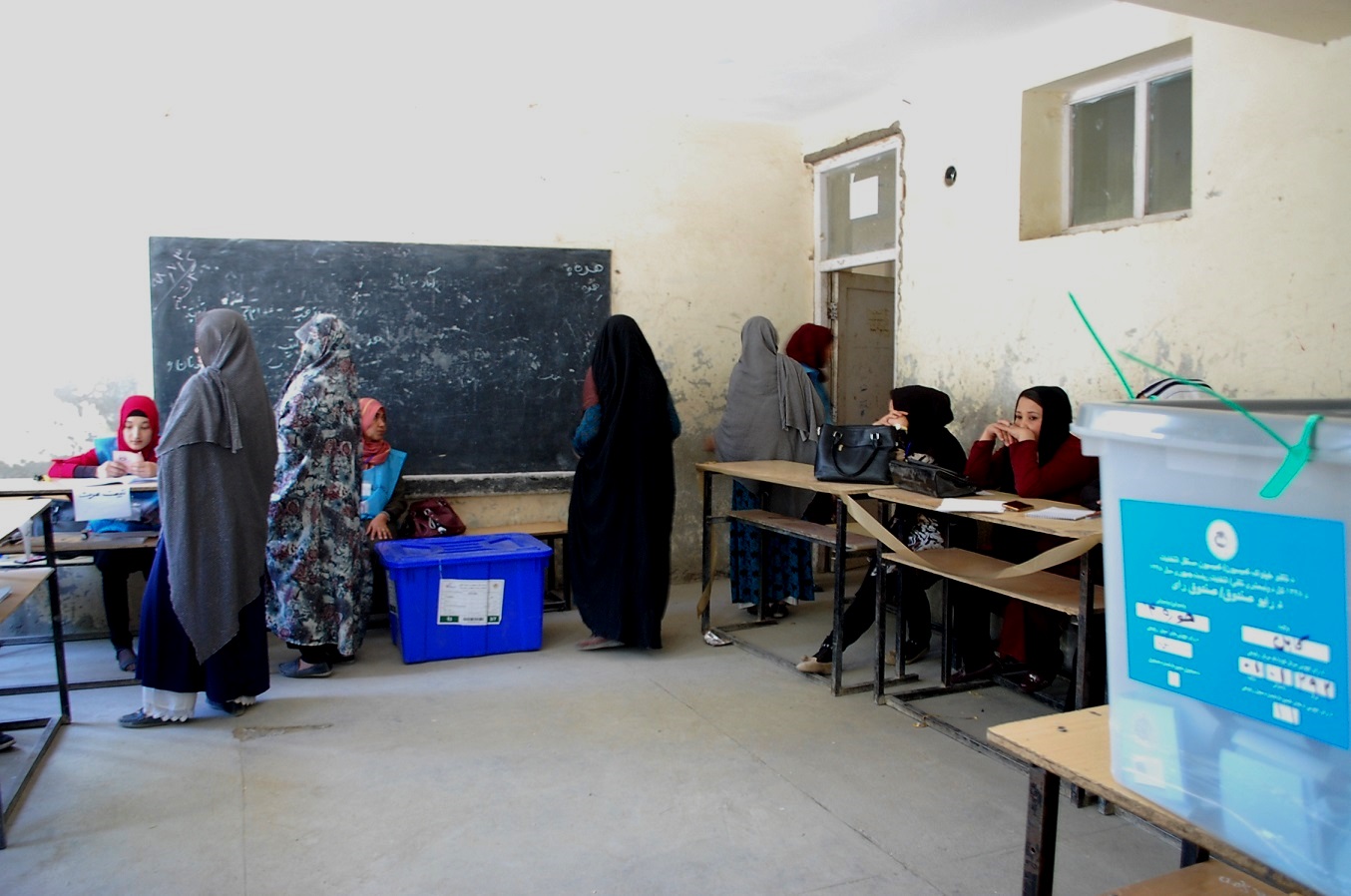 Afghan women at the Sayed Shuhada polling station in Kabul during the 2019 Afghan presidential election. Many returned home without voting after not being able to find their names on the voter lists. Photo by Ezzatullah Mehrdad, used with permission.

But not all women were as fortunate as Amina. Mohammad Eisaq Arefi, who is in charge of the Marefat polling station where Hussaini tried to vote, acknowledges that in some cases women's names were listed under the men's section, and vice versa. “I really do not know why we have these widespread technical problems,” he said, “but it seems to be a bigger problem related to the election body.”

Some other Afghans determined to vote lost their lives in the process: at least 30 security personnel and 10 civilians were killed in incidents related to the election, according to conservative estimates.

While the election process ended on September 28, results are not expected to be made public before October 19. The election authorities did not say exactly how many polling stations were opened across the country, but reported a significant increase in votes between their first and the second updates about participation rates. This is particularly relevant in light of fraud allegations, as Jawad Zawulistani, a young human rights activist who decided not to vote explains: “I do not have any trust in the election body. When my vote counts and is respected, it’s valuable. But as a citizen, I did not want to be manipulated by a team [of the current President] that has decided to betray us.”

It was also reported that as election officers were counting votes, the Taliban destroyed towers belonging to telecommunication companies in the north of the country, making it impossible for the election authorities to release accurate data.

The confusion around the electoral process has also escalated as the two top candidates have both claimed victory. Chief Executive Abdullah Abdullah, and President Ashraf Ghani have each claimed they won before the election body could have tallied the total number of votes. Both candidates contested the previous presidential election of 2014, and claimed victory back then in a similar scenario.

Should another political crisis develop, however, the impact on people like Mohammad Jan Hussaini will be severe. As a father of six, Hussiani is responsible for the livelihood of nearly ten households, including that of his parents. Food prices are constantly rising: a sack of rice now costs the equivalent of US$35, a liter of oil is US$15.