An Exiled Nation: Saharawi advocates call on the world to support self-determination for Western Sahara 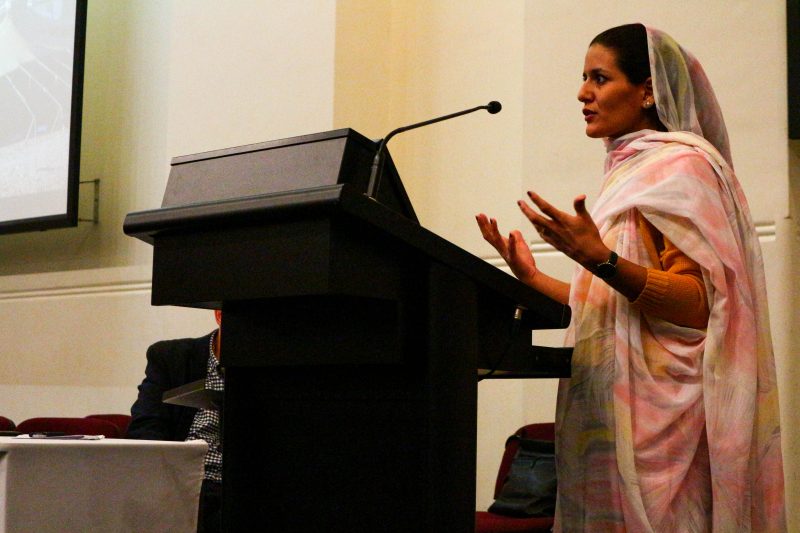 Tecber Ahmed Saleh, a health worker in the Western Sahara Ministry of Health, speaks to an audience of trade unionists at Unions NSW, Sydney, Australia. Photo by Timothy Ginty, used with permission.

For 40 years, the Saharawi people have been exiled from their homeland, cast out into what is known as the “desert of deserts”, where they live in hope of one day experiencing a long-awaited return to their promised land: their homeland of Western Sahara.

Their wait has been so long that entire generations have lived and died hoping for a return. One young Saharawi woman, Tecber Ahmed Saleh, tells me: “My grandmother, she died holding the radio, thinking that tomorrow they would call a referendum.”

The referendum that Tecber’s grandmother was listening for was first promised in 1991, when, after decades of colonisation and conflict, the Moroccan government agreed to a ceasefire that would have led to a vote on independence or autonomy within the Moroccan state.

The referendum has proved a mirage, and the current generation of Saharawi people are growing impatient. Tecber tells me that “the younger generation is thinking: ‘oh, we’ve been waiting for your peace solution for forty years, we´re not going to die in the desert, maybe we will lose, but we will try’.”

The Saharawi people were pushed into this “devil’s garden”— as the desert is known — in 1975, when, following colonial Spain’s withdrawal from Africa, the Moroccan and Mauritanian armies mobilised to occupy the resource-rich Western Sahara, beginning a bloody conflict that would end with Morocco annexing the region in 1976.

Faced with an occupying army, the Saharawi people sought refuge in neighbouring Tindouf Province in Algeria, establishing one of the largest and longest-lasting refugee camps in the , from which the Western Saharan government operates in exile.

Today, with only a threadbare ceasefire agreement between the Moroccan army and the Western Sahara Polisario Front holding things together, the return of war remains an ever-present possibility.

Formed as an armed defence of the Western Saharan territories against the Moroccan and Mauritanian incursions of 1976, the Polisario Front has grown into an ideologically heterogeneous movement whose primary objective is Saharawi independence.

The Polisario Front has pursued peaceful avenues to secure independence since 1991, though it reserves the right to resort to the use of arms should Morocco fail to uphold the ceasefire agreement, including the promised referendum. The peace agreement struck between the Polisario Front and Mauritania in 1979 remains in vigore.

To build peace, goodwill is needed. But with a 2,700 kilometre wall separating the Saharawi people from their rich lands and seas to the west, with an estimated five to ten million land mines buried beneath that wall, there is little wonder why the Saharawi people place little faith in Moroccan goodwill and turn, instead, to the international community. Known to Saharawis as the ‘Wall of Shame,’ this wall was built in stages throughout the 1980s, following renewed hostilities between Morocco and the Polisario Front. Today it marks the boundary between the Moroccan ‘Southern Provinces’ and the Polisario-controlled Free Zone.

The Saharawi refugees have lived in those camps since 1975, when Algeria officially recognised them as refugees and permitted access to public services. In the 1980s, Algeria appealed to the United Nations for assistance in providing for the refugees’ basic needs, and the camps remain to this day reliant on international aid for their survival. But with humanitarian aid budgets straining during globally convulsive times, the conditions in the refugee camps have been worsening. Tecbar says: “Every time, we are getting less and less and less food. We started with two kilos of sugar or two litres of oil per month per person. Now you get half, and the family has to altogether customise their needs.”

Tecber is a health worker in the Western Sahara Ministry of Health that operates from the refugee camps. Her research has shown that Saharawi refugees’ diets do not provide even the bare minimum of nutritional requirements. This is because, she explains, refugee rations were meant to be temporary — just enough to help them get by until resettlement. The ‘temporary’ situation, however, now amounts to over 40 years.

Tecbar also notes that refugees also cannot access adequate amounts of clean drinking water. The water, she says, “is full of minerals that influence the health directly — for example iodine — so people are drinking water that in the long run is causing more health problems than benefits.”

Though the international community fails to provide adequate funding for the refugees’ humanitarian needs, Kamal Fadel, a representative of the Western Saharan government in Australia and New Zealand, speaks highly of the Saharawi people’s host country. “Freedom and respect of other’s rights is something embedded in the Algerian psyche,” he says. “It is part of the Algerian personality.” 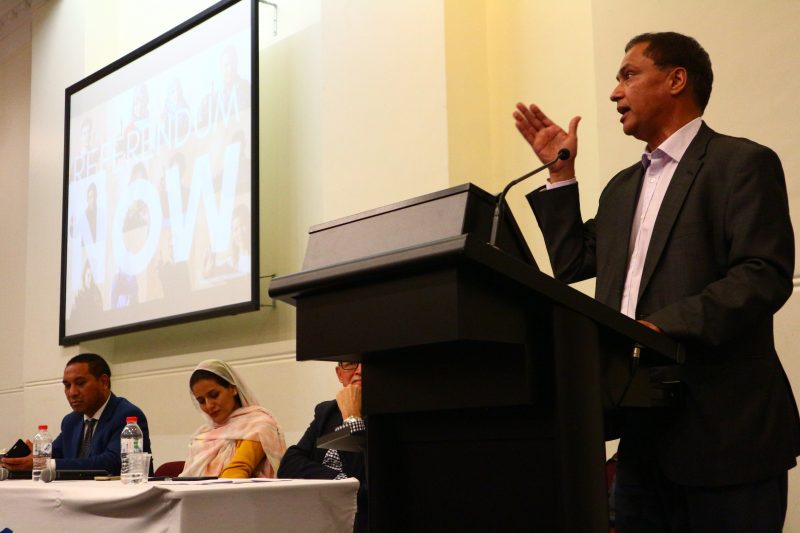 According to Kamal, solidarity from nations who have already been liberated from colonial oppression — nations like Algeria and Timor-Leste — has been important in maintaining the morale of the independence movement. “To know that people far away care,” Kamal says, “is what keeps us going. This is what gives us strength in spite of all the challenges.”

In their camps of mudbrick homes and canvas tents, the Saharawi people have worked to build the infrastructure and apparatus of state: they have established educational and healthcare services, ministries, and a diplomatic corps. Their efforts at building sovereignty have been recognised at different points in history by 80 countries, and Western Sahara is a founding member state of the African Union. True sovereignty, however, remains elusive owing to French economic interests, Spanish diplomatic impotence, Moroccan might and influence, US inconsistency, and, importantly, international ignorance. “Everybody knows about Palestine, but nobody knows about Western Sahara,” Tecber laments.

A solution to the conflict was nearly secured in 1991 when the UN Mission for the Referendum in Western Sahara (MINURSO) peace process was agreed upon by both the Moroccan government and the Polisario Front, heralding the long-awaited referendum on self-determination. After nearly 30 years, however, this referendum remains out of reach.

Kamal Fadel argues that not only has the UN peace-keeping mission manifestly failed to deliver a referendum — it has also failed to protect the Saharawi people from human rights violations. “MINURSO is the exception to the rule,” he says. “Every UN mission in the world has a mandate to monitor and report on human rights: MINURSO does not.”

In recent attempts to expand the mandate of the UN mission, Western Saharan allies and nations sympathetic to a referendum have come up against the veto power of France in the UN Security Council, which unequivocally supports Moroccan interests in Western Sahara. “This kind of business as usual has to end,” Kamal says. “We cannot let MINURSO go on forever, because it is spending a lot of money and it is not doing its job.”

In order to move beyond this impasse, Kamal advocates for a stronger stance from world governments that would endorse an expansion of the MINURSO mandate to include human rights monitoring, that would recognise the Polisario Front as the legitimate representative of the Saharawi people, and that would urge the UN to move forward without further delay on the already-mandated referendum.

Questions of geopolitics, commercial interests, and diplomatic processes aside, the question of justice that Tecber Ahmed Saleh poses — her plea to the world — is much simpler: “Why can’t we just have our land?”