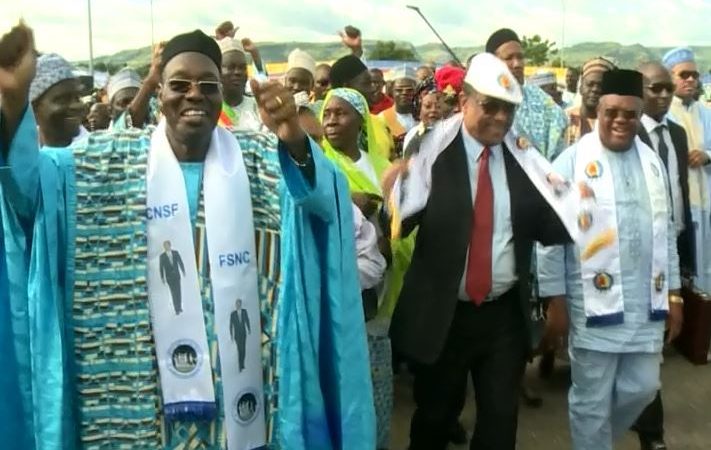 The week-long discussions to end fighting between government forces and militias in Cameroon’s English-speaking regions started on Monday, September 30, 2019, in the country’s centralized capital Yaoundé. However, citizens have lingering fears that the peace dialogues won’t put the crisis to rest.

Cameroon leader, Paul Biya, who has ruled the country since 1982, summoned the dialogue on September 10, to resolve a three-year-old insurgency. The conflict has led to the deaths of about 2,000 people and displaced more than 500,000 [2] in Anglophone northwest and southwest regions, according to the United Nations.

Read more: Cameroon on a path to ‘national dialogue’ as Anglophone crisis continues [5]

Netizen Batata Boris Karloff said on Twitter that the talks would “make or break the fractured country:”

The much talked about Major #NationalDialogue [6] begins in #Yaounde [7] today.
The outcome of the five days talks would either make or break the break the fractured country pic.twitter.com/S0DNDdaMND [8]

Separatist and opposition leaders waved aside

Nonetheless, the government-led talks have ignored separatist leader, Julius Ayuk Tabe, who, alongside other members, received a life sentence in jail [10] in August this year.

Tabe heads a movement that is trying to form a breakaway state from mainland Cameroon, called Ambazonia [11], and movement leaders have openly shown disdain for the conference.

Also, the leader of the Cameroon Renaissance Movement party, Maurice Kamto, who was arrested in January this year for orchestrating post-election protests, isn’t at the discussion table. His party has denied attendance until the government releases Kamto.

Vy on Twitter also shared doubts over the dialogues:

Many moderate Anglophones want constitutional changes, with a return to the federal system being key, but the Biya regime doesn’t have that on the agenda:

Agbor NKongho in a press release maintained his stand on a return to the federal system of government as a means to solving the Anglophone crisis in Cameroon, 30th September 2019 https://t.co/0nX31qdIOW [23] via @chrda_africa [24]

Instead, the Biya government created eight commissions as part of the peace dialogues that only focus on decentralization, a system put into place by Biya in 1996.

Former presidential hopeful, Akere Muna, who is attending the national dialogues, told Reuters on September 30: “It is farcical to not have a commission to discuss federalism, which is at the core of all of this.”

“It is farcical to not have a commission to discuss federalism, which is at the core of all of this.” — Akere Muna, politician, Cameroon

He further expressed his frustration at the government’s dictatorship of the event on Twitter:

“Sultan Mbombo Njoya (one of Cameroon’s ethnic rulers) calls for limitation on the Presidential term of office to 2x5years and two round Presidential election. The PM (Joseph Dion Ngute who is chairing the discussions) reminds us to stick to the agenda and not to go out of topic.”

For context, French and English Cameroon became one nation in 1961 under a federal system, where the latter had their own autonomy with their own police, government and judicial system. But federalism was abolished by President Biya’s predecessor, Ahmadou Ahidjo in 1972 – creating a united republic which the 86-year-old Biya has strengthened and centralized over the years.

Now, many want that era back, including a man named Martin, who works as a carpenter in Mutengene, a city along Cameroon’s western coast. He declined to give his last name fearing reprisal by government or separatists.

“I don’t see anything coming out of that meeting in Yaoundé. We talked about federalism but it’s not mentioned by [the] government. To me, it is a meeting of [Cameroon People's Democratic Movement] CPDM supporters,” he told Global Voices on Sunday, September 29 in Buea, while attending a church service.

“I don’t see anything coming out of that meeting in Yaoundé. We talked about federalism but it’s not mentioned by [the] government. To me, it is a meeting of [Cameroon People's Democratic Movement] CPDM supporters.” — Martin, Mutengene, Cameroon

For Relly Ebini, who works as a cameraman in Buea, a central Anglophone city, he strongly holds federalism will be the best thing out of the discussion.

“I want to believe the discussion will lean on federalism. That is what we Anglophones want and I believe it will put a stop to the crisis,” he told Global Voices on Sunday, September 29.

With so many people displaced, Martin hopes he will one day visit his village in the northwest region again:

“When the crisis started in 2016, I had not gone to my village. It’s been four years now, I haven’t been there because of the conflict,” he said.