No land, no fish: Mekong community in northeast Thailand struggles against a double-threat 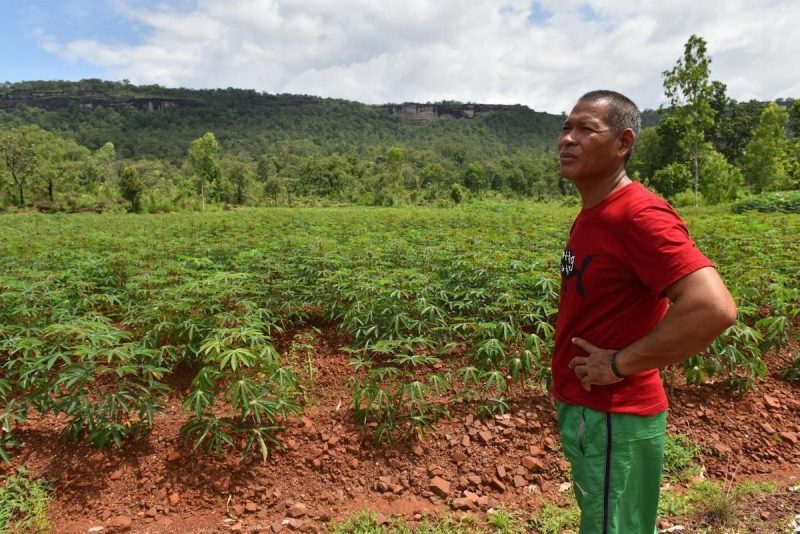 Rit Chansuk, 50, is one of several farmers who are rejecting accusations that they are encroaching land in Pha Taem National Park in Ubon Ratchathani. Photo and caption by The Isaan Record

This edited article by Panumas Sanguanwong is from The Isaan Record, an independent news site in Thailand, and is republished on Global Voices as part of a content-sharing agreement.

Ubon Ratchathani locals in northeast Thailand are wondering why they are being prosecuted for farming on land passed on to them by their parents.

“If I lost my land, I would want to die. I wouldn’t want to live,” said 50-year-old Rit Chansuk, his voice quivering with emotion as he looks over the two-rai plot of land (0.32 hectare) he is about to lose.

Rit is one of several villagers accused of encroaching land in Pha Taem National Park in Ubon Ratchathani. He was born in the mountainous area known for its ancient rock art and cliffs above the Mekong before it was declared a national park in 1991.

We have farmed on this land since our parents’ generation, even before Pha Taem was turned into a national park.

In 2014, the military junta under the National Council for Peace and Order (NCPO) ordered that forest areas be reclaimed from encroachers in a push to increase the country’s forest cover by 40 percent or more than 27.2 million rai (4.35 million hectares). From that point until September last year, people in more than 28,000 cases have been prosecuted for forest encroachment, covering a total area of almost 820,000 rai (131,200 hectares).

Across the northeast, several forest communities are resisting eviction from land that they claim has been theirs for generations.

From creeks to farmland

Rit was born in Ta Mui village in Huai Phai sub-district in Ubon Ratchathani’s Khong Chiam district. He claims to have inherited the land in question, along with his two elder brothers, from his parents.

This area used to be creeks, full of rocks. Since there wasn’t much land, we simply farmed rice. Later on we started moving the rocks, creating a ridge with the rocks to collect soil, and since then we’ve turned into the farmland that we see now.

In 2015, Pha Taem National Park officials, following the government’s forest reclamation policy, conducted a land ownership survey. They found that Rit’s land encroached on the park and asked him to sign a document which would hand the land over to the authorities, but he refused.

I am not encroaching on park land. There were clear boundaries between the land that we farmed and the national park. But now they’ve extended those boundaries toward the roads. How can they expect us to swallow that [to return the land]? Where will I farm? My land is here.

By late 2018, Rit found himself accused of encroaching on Pha Taem National Park land and was reported to the police three times. The police are still deciding whether or not to arrest him and press charges.

He is in a different situation than other villagers who willingly signed documents because they feared prosecution. He is still farming on the land despite the uncertainty about when the officials will make him give it up.

A village with a history

The history of Ta Mui village can be traced back to 1858 before it expanded into a larger community and was officially recognized, in 1927, as a village by law as part of the Huay Yang sub-district. Later, it fell under Huay Phai sub-district in Ubon Ratchathani’s Khong Chiam district. The village currently consists of over 120 households.

Dong Phu Lon forest was declared a reserved forest in 1973 before being declared Pha Taem National Park in 1991.

Sot Chansuk, a 66-year-old Ta Mui villager, remembers the time around 40 years ago when war raged in neighboring Laos. Fearing that the fighting would reach across the Mekong, his family moved from Ta Mui village near the river to the safety of the mountains.

He added that after Pha Taem was declared a national park, the park chief at the time conducted a land ownership survey and assured villagers that their farmland would be separated from the park land. But this agreement was never put into writing.

With little knowledge of the law, Sot and several other villagers signed a document without fulling understanding the ramifications.

Sot’s land is still fenced off to prevent cows and buffalos from destroying his crops which include mango, tamarind, and cashew nut trees that his parents had planted, and they are still the family’s main source of income.

While the land yields produce, it does not generate much income for the family. After the seasonal harvest, Sot switched to catching fish from the Mekong River, but he says the river is not the same as before. 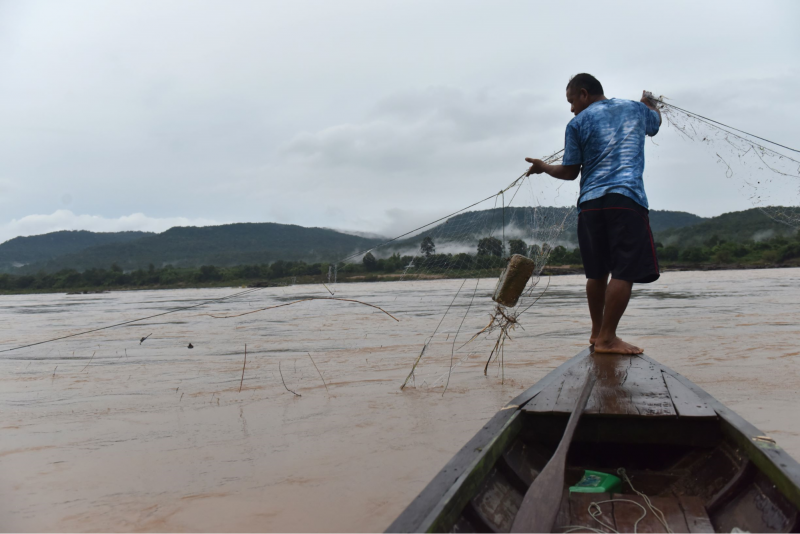 Chula Chansuk, or “Ko”, looks for fish in the Mekong River in Ubon Ratchathani’s Khong Chiam district. But more often than not, his nets remain empty. Photo and caption by The Isaan Record

Less fish in the Mekong

Sot’s brother, Chula, also works as a fisherman in Ta Mui village. Every morning, he starts the engine of a small boat and heads off to check whether his fishing nets have yielded any fish. But most of the time, he nets only sticks and garbage.

Chula said that some ten years ago, the water level in the Mekong river was different. The construction of Chinese dams upriver wreaked havoc with the water levels and disrupted the natural feeding and breeding cycles of the fish.

In the past, he was able to earn several thousand to around 10,000 baht [327 US Dollars] from catching fish during the high water season. But now hardly anyone in the village bothers to go fishing.

In the past you would catch fish to sell, but these days we can barely feed ourselves with the catch.

A 2017 UNESCO study found that the disruption of sediment flows in the Lower Mekong Basin, especially during the construction of 11 dams on the Mekong River, profoundly affected downstream areas, particularly in terms of food security from farming and fishing.

Without fish in the river, Chula switched to farming. Like his brother Rit, officials told him that his land belongs to Pha Taem National Park, but Chula insists that he owned the land before the national park was even declared.

Demolish half a house

Less than one kilometer away from Ta Mui village is Tha Long village, also in Khong Chiam district, where officials say six residents have been charged with land encroachment.

Among them is the family of Kongpat Wonglakorn and her husband Lai Sirimat. During a land survey, park officials told them that everything was in order but later said they had to demolish half of their house. 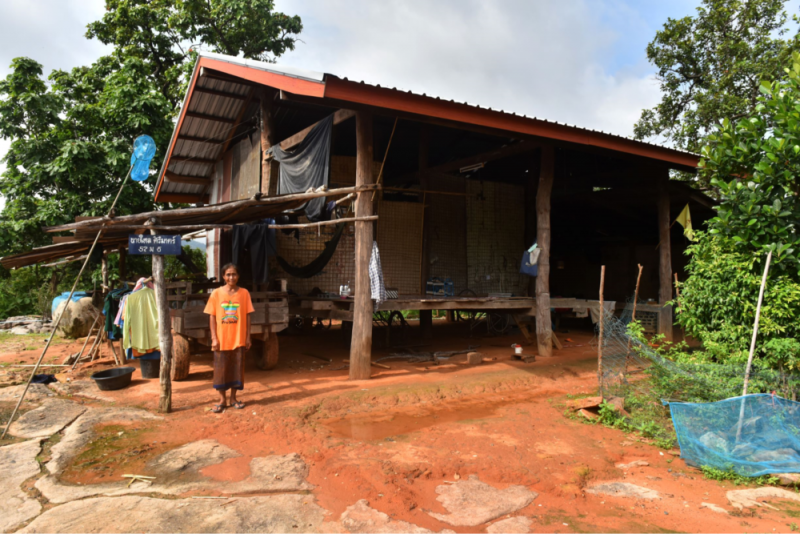 Kongpat Wonglakorn, 54, was told by park officials to demolish half of her house because it encroached on national park land. Photo and caption by The Isaan Record

They told us to demolish it ourselves. If we didn’t, they said they would demolish it and we might be arrested. They said we might have to pay fines and be sent to prison.

Officials brought satellite images for the villagers to see and told Kongpat that half of her house overlapped Pha Taem National Park.

“They said according to the map, it curves right here,” she says, running her finger over the map.

I don’t understand but I’m very stressed. How can they demolish it? I don’t have anywhere to live. We aren’t rich investors. We’re poor people.

According to a police report from Khong Chiam police station in Ubon Ratchathani, Lai is accused of land encroachment under the 1941 Forestry Act, the 1961 National Park Act and the 1964 National Reserved Forest Act because part of the land in Pha Taem National Park overlaps Dong Phu Lon Forest Reserve to the north.

Meanwhile, Nakarin Sutatto from Ubon Ratchathani’s Pha Taem National Park says that since the forest reclamation policy in 2015 was implemented, a total of 41 plots of land were found to be encroaching on national park land. Officials provided satellite images as evidence that villagers had encroached on the land after 2015, resulting in some locals having to return their land.

In November 2017, some villagers filed complaints to Ubon Ratchathani’s Damrongdham Centre to seek justice. Ubon Ratchathani’s governor at the time set up a fact-finding committee to survey the boundaries between three affected villages, including Tha Mui and Tha Long.

Villagers should not be affected

Ministry of Natural Resources and Environment spokesperson Sophon Thongdee said in an interview that the government had focused on reclaiming land from business people, people who exploited the land purely for commercial gain, rather than ordinary villagers. After the reclamation, the land would be restored and trees planted.

We need to find ways to help those who have lived on the land before the areas were declared as forests. We are currently waiting for policy guidelines to solve the problem in a sustainable manner, but villagers aren’t the main focus of this policy.