As real bullets fly and hit in Hong Kong, the police start a new cycle of unprecedented violence

Hong Kong's hawks are being praised by China as national heroes 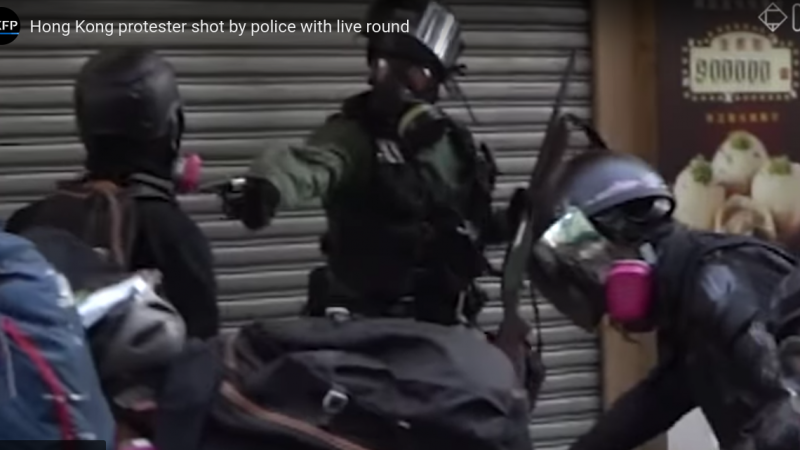 As the People's Republic of China celebrates the 70th anniversary of its founding, police violence in Hong Kong is escalating to new levels: an 18-year-old schoolboy was shot at close range and barely survived his injuries. This incident took place as people in Hong Kong continue to protest to demand guarantees for their freedom. While the controversial extradition law to China has been scrapped, others demands remain unanswered.

More violence expected after teenager is shot at close range

The incident occurred on October 1, when a riot police officer holding a long shield appeared near a bus stop in Tsuen Wan district, a location where triad members, violent protesters and riot police had been chasing each other. Spotted by protestors, the police officer was rapidly surrounded and used his shield to protect himself against the rods and hammers pointed at him. In no time, an estimated 10 riot police officers charged in with guns and shot one of the protesters at close range. The victim had to undergo a 4-hour operation, but managed to survive. Reportedly, the bullet hit his left lung and a piece of bullet shell was lodged just 3 centimeters from his heart.

It is important to note that all police officers, including the one who opened fire, were carrying less lethal weapons. Yet the Hong Kong police force justified the shooting as an act of self-defense. Here is a full video of the events:

On that day, confrontations between the police and protesters took place in at least 13 locations, as news about the shooting spread. This led to a massive response from the riot police which fired more than 1,400 tear gas canisters, 900 rubber bullets, 230 sponge bullets, 190 bean bags and six live rounds of gun. A total of 269 protesters were arrested.

Two other shooting incidents were captured on video footage posted on YouTube. One video shows five police officers surrounded by protesters pelting objects at them. A police vehicle comes to their rescue, but instead of leaving the scene afterwards, six police officers jump out of the vehicle and pick a fight with the protesters. A gunshot is then fired. The other video shows protesters throwing objects and Molotov cocktails at riot police.

A prophecy fulfilled: real bullets will be fired

In the past few months, Hong Kong's police have avoided lethal weapons. But exasperation at the lack of government response to demands, combined with the alleged abusive use of force and, in certain cases, of torture by the police, has radicalized some protesters.

At the same time, pro-establishment hawks have been openly advocating for the use of lethal weapons. For example, the Junior Police Officers’ Association, Hong Kong’s biggest frontline association, issued a statement around mid-September, urging its members to use appropriate weapons in situations where they believe their lives are at risk. Back in July, the Association, known for its pro-Beijing stance, referred to the protesters as “cockroaches” in an official statement. It also criticized Chief Secretary Matthew Cheung for an apology he made over the absence of police force during the Yuen Long mob attack on July 21. The Association has been one of the strongest voices against an independent investigation, a demand which garnered the support of 79 percent of respondents in a public survey conducted by the Public Opinion Institute in August.

On September 30, police authorities organized a press conference in response to a Telegram message in which some radical protesters allegedly discussed plans to kill officers, set fires and bomb shopping malls. Protesters challenged the veracity of the alleged intelligence by pointing out several inconsistencies including the fact that the user account, group and channel accounts were all registered in mainland Chinese pinyin rather than the traditional Cantonese romanization used in Hong Kong. Moreover, the majority of the location marks in the attack map were wrong. This piece of police “intelligence” was nevertheless widely reported on major TV channels, unlike the protesters’ version of the story. 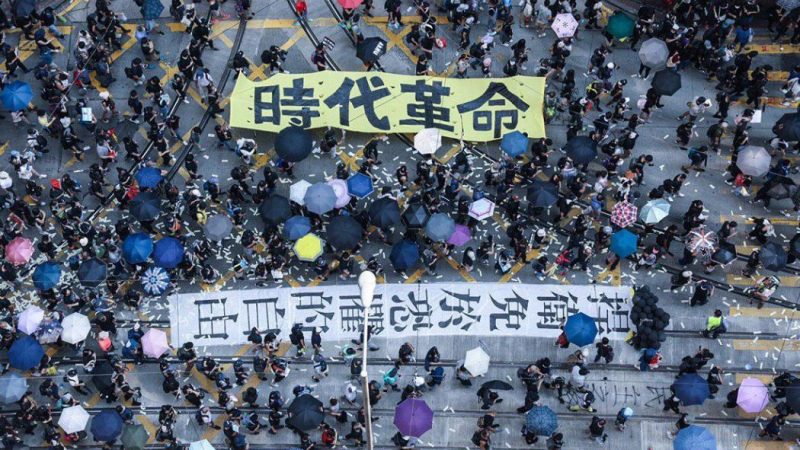 In order to support the Hong Kong police and justify their actions, Beijing has reached into its propaganda box for its favorite tool: online narratives glorifying new heroes defending the Motherland.

People in Hong Kong had been warned that no permit had been issued for a protest on October 1. To underline the message, Beijing also picked 10 Hong Kong police officers to represent their city at National Day celebrations in the Chinese capital. One of them was Lau Zaak Kei, who became famous after pointing his projectile gun at protesters during a clash on July 30.

As demonstrated in two separate videos, the incident took place when three police officers were caught in a confrontation with protesters wielding batons and umbrellas. Lau fell down, then picked up his long gun and pointed it at protesters.

The gun-pointing image was later packaged into a viral post entitled “The bald-headed police officer who raised his gun could never imagine that he has touched the heart of China” (举起枪的光头警长，没想过会感动中国). The post, to which illustrations and alleged quotes by Lau were later added, was curated by the Chinese Communist Party-affiliated Global Times news outlet.

Lau became an icon for “Support Hong Kong police campaign” overnight. As explained by the Chinese social media observatory What’s on Weibo, the idea of supporting the Hong Kong police goes hand-in-hand with the idea that Hong Kong is, and “always will be,” a “part of China”. 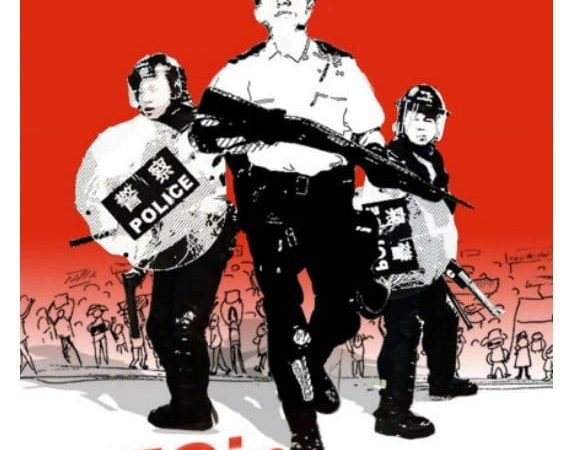 The campaign has also made an appearance in the non-virtual world. On several occasions since August 2019, pro-Beijing mobs wearing blue T-shirts emblazoned with the slogan “I love Hong Kong police”, and often originating in the border province of Guangdong in mainland China, have attacked Hong Kong protesters and civilians.

Group of blue-clad gov supporters attacking innocent citizens who were just passing by. Attackers are kicking and even use their China National Flag to hit pedestrians.

While officially restricted by a pledge of political neutrality, police officer Lau has opened a Weibo account where he actively comments on the Hong Kong protests, including praising pro-Beijing lawmaker Junius Ho for mobilizing “support Hong Kong police mobs.” Ho was spotted shaking hands with members of triads during the Yuen Long mob attack, and some believe he may have played a role in staging the attacks.

The 10 police officers who arrived in Beijing on September 30 were part of a much larger Hong Kong delegation, yet were prominently portrayed in news coverage. Below is a Twitter version of the glorification of the ‘heroes':

If the shooting at close range of protesters becomes a “heroic act of the nation”, who will be able to stop the cycle of violence in Hong Kong?