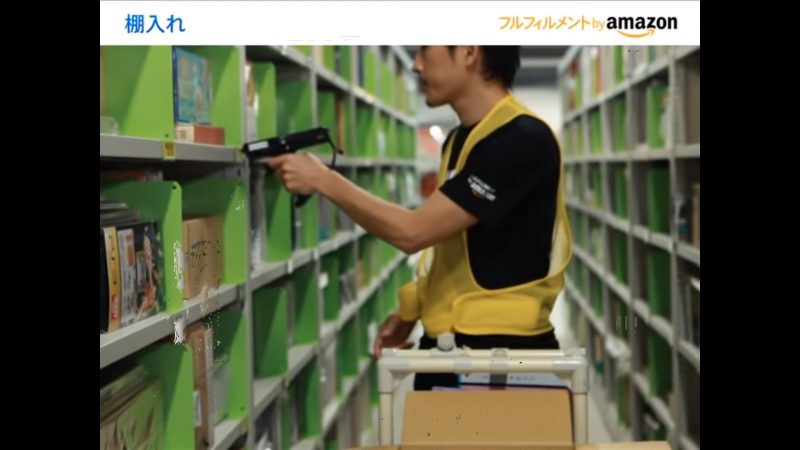 A worker at an Amazon fulfillment center in Japan. Screencap from Amazon Japan promotional video.

A new book by a Japanese investigative reporter reveals deadly working conditions at a large Amazon distribution facility just outside of Tokyo. Based on undercover reporting and numerous interviews with workers, the book describes a large segment of the Japanese labor market dominated by temp companies and precarious working conditions.

In Yokota Masuo's “An Undercover Report on the Amazon Empire” (潜入ルポ amazon帝国), the investigative journalist alleges that workers at an Amazon “fulfillment center” (a warehouse and logististics hub) — located in the small regional city of Odawara 80 km west of Tokyo — work physically punishing shifts that have resulted in at least five deaths over the past five years.

In an excerpt published on news site News Post Seven (NEWS ポストセブン), Yokota explains how he “infiltrated” the Odawara fulfillment center in 2017 in order to report on working conditions. The business journalist had also worked undercover in 2004 to investigate Amazon both for an earlier book as well for an award-winning exposé on clothing giant Uniqlo, and frequently reports on how workers in Japan are being affected by a rapidly changing labour environment.

Amazon, which accounts for 20 percent of e-commerce sales in a Japanese marketplace of 86 million online shoppers, opened its Odawara fulfillment center in 2014. The expansive multi-storey, warehouse-like building covers 650,000 square feet of space — “about the size of four Tokyo Domes,” according to one news report — and employs about a thousand people. The facility was built in order to provide same- or next-day shipping service in the nearby Tokyo region of more than 30 million people, where Amazon wants to continue to grow its business.

In the book, Yokota says that just before he started to work there, he learned of the death of “Uchida Rika” (a pseudonym to protect the privacy of her surviving family), a 59-year-old woman who collapsed and died from an aneurysm while working for Amazon as a picker.

During Yokota's own time as a picker, a second Amazon worker, “Kitajima Masato”, who is survived by his wife “Kyoko” (both names are pseudonyms), also died. A married couple in their late thirties who worked at Amazon's Odawara fulfillment center as part-time pickers, the couple had entered the workforce after graduating from middle school, working at a series of low-skilled jobs. According to Yokota, the 2008 Lehman Shock triggered an economic recession in Japan that left them both out of work and living on welfare in Odawara.

After marrying, they found work at the fulfillment center, but rather than being employed by Amazon itself, the pair were dispatched by labor subcontractor World Intec as temporary workers (非正規労働者). It is estimated that about 37 percent of the Japanese labor force currently works on temporary contracts, a legacy of sluggish economic growth in the 1990s and the financial crisis of 2008.

While undercover at the Odawara warehouse, Yokota estimated that he would walk about 20 km over the course of a 6.5 hour shift, and that a picker could easily cover 30 km in ten hours — not an uncommon shift length if a picker works overtime during busy periods.

Pickers must travel all over the fulfillment center to gather and build orders — and because these tasks are timed and tracked to the second, many forego breaks in order to keep up. Yokota says that workers had no time to rest or even eat: “Kyoko” reportedly lost 10 kg (22 pounds) over the course of a month.

One day, “Masato” collapsed. The centre eventually called an ambulance and he was taken to hospital, where he died. The attending physician stated the cause of death as an aortic dissection, an uncommon heart condition typically experienced by men in their 60s and 70s.

The claims Yokota makes in his book have been corroborated by reports in the Japanese Communist Party publication Akahata (Red Flag).

In a 2018 article (English), Akahata had already tracked at least three deaths in “sweatshop-like working conditions” at the Odawara facility, based on interviews with former employees, as well as on comments gleaned from social media.

One worker told Akahata he was “nearly driven to commit suicide” by the working conditions at Odawara. Another Amazon worker, identified as “Okawa”, said:

My co-workers, one after another, resigned after they suffered from heat stroke, fatigue fractures, back pain, and other injuries and illnesses […]

“Okawa” also told Akahata that scheduled breaks were shortened throughout the day, leaving no time to travel to the on-site cafeteria, eat lunch and return to work. Wages were typically 950 yen (US $9.50) per hour — minimum wage in Japan — although some temporary workers received 2,000 yen (US $20) per hour during busy periods.

In another article, Akahata reported (in English) on comments made on the Japanese forum site 2chan (now rebranded as 5channel) about the center's working conditions:

‘I heard that a worker died at the warehouse.’
‘Recently, workloads have become heavier due to shorter rest periods. Take care, everyone!’
‘The company’s “do nothing unless something happens” attitude has led to this tragedy. Anti-heatstroke measure[s] [are] a case in point. Only after many workers suffered from heatstroke, the company finally implemented countermeasures.’

Yokota suggested that a lack of oversight and accountability on the part of Amazon has led to such deadly working conditions:

Amazon has offloaded management of these temp jobs to World Intec and other subcontracting agencies, and is not directly involved at all in overseeing the part-time workers. In such an environment, the location of the question of who will take responsibility for the working conditions of temporary and on-call workers becomes ambiguous.

According to “Masato”‘s widow and other workers at the center, Amazon made little or no effort to communicate about his death. In an interview, a supervisor told Yokota:

“A coworker mentioned to me that police had come onsite that day. However, nobody formally notified any employees. When I brought up his death at a meeting with a supervisor several days later, […] all they knew was that he had been taken away by an ambulance, and that they didn't know he had died. I find it hard to believe that nobody [in management] knew.”

At the time of her husband's death, “Kyoko” had left the Odawara fulfillment center for another part-time job; she had just 40,000 yen (US $400) in the bank. She eventually received a lump-sum payment of 30,000 yen (US $300) from World Intec. With her lack of savings, the meager payout from her husband's death and the loss of his income, “Kyoko” had no way to pay for hospital and funeral expenses, or even her monthly rent.

While some Amazon warehouse workers have attempted to unionize, so far there have been no major changes to the working environment in Odawara. In an era where more than 36 percent of all workers are employed as temporary, on-call workers and in an era of stagnant wage growth, low-skilled workers still face precarious situations no matter where they live in Japan.

“Kyoko” is a case in point. Having a few other prospects after she recently lost her job as a supermarket cashier, she went back to work at the fulfillment center:

“Since there are so few jobs in Odawara, Amazon told me to let them know if I ever needed help [with work]. And I can get paid on a daily basis. While it would be a lie to say I bear no ill feelings [towards Amazon] about the death of my husband, I'm taking the job because I need to earn a living.