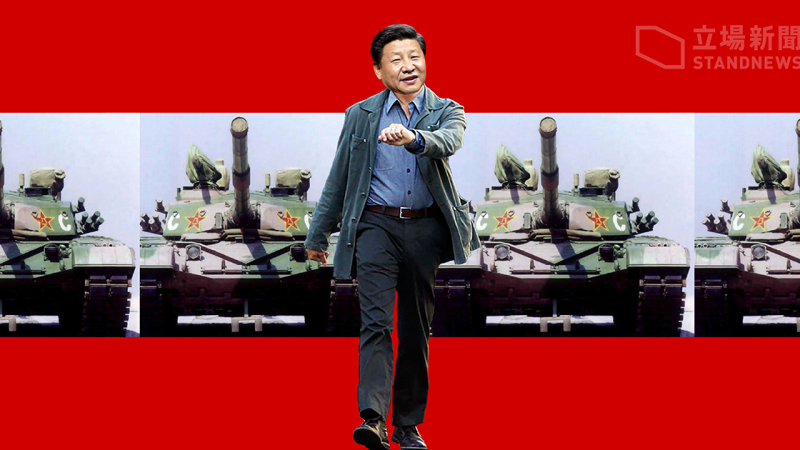 Photoshop image from the Stand News.

Ahead of the 70th anniversary of the People Republic of China, the Chinese State Council Information Office issued a white paper on China's human rights conditions on September 22, 2019. Titled “Seeking Happiness for People: 70 Years of Progress on Human Rights in China” [2], the paper defines human rights as people’s rights to happiness and development.

While China claimed that it has become a true democracy and a champion of human rights, international press freedom watchdog Reporters without Borders slammed [3] the report as a “smokescreen” intended to mask China’s “horrendous record” when it comes to human rights and freedom of the press.

The Chinese government supported its achievement in human rights with a large number of statistics on economic and social development, such as poverty reduction figures:

Here is the full text of the white paper: Seeking Happiness for People: 70 Years of Progress on #HumanRights [5] in China.https://t.co/WYEB7hyAlG [6] pic.twitter.com/1zBH30w2D9 [7]

Despite severe international criticism [9] over human rights conditions in Tibet and Xinjiang [10], the paper claimed that the rights of ethnic minorities are well protected, again citing GDP growth in five autonomous regions of Inner Mongolia, Guangxi, Tibet, Ningxia and Xinjiang.

Cédric Alviani, head of Reporters Without Borders’ East Asia office, urged [3] the international community to not be fooled by “a text that purposely confuses development with human rights as defined by the Universal Declaration of Human Rights, of which China is a signatory but violates daily”.

In its press release, Reporters Without Borders stressed:

China is the biggest prison in the world for journalists, with at least 115 detainees, who may suffer the same fate as late Nobel Peace Prize laureate Liu Xiaobo and blogger Yang Tongyan, who both died in 2017 due to untreated cancers in detention. The 850 million Chinese internet users are also kept out of the global community by a system of censorship and technological surveillance which limits their ability to inform themselves freely.

Twitter users outside of China observed that the Chinese report omitted any mention of the country's humanitarian disasters:

"The tragedies and miseries that the Chinese people and other minority nationals suffered under the Great Leap Forward movement and the famine, atrocities of Cultural Revolution and the Tiananmen Square massacres are all missing"
China’s white paper… #HR [11]https://t.co/3ZTfrxY73R [12] pic.twitter.com/VZR2akyGAm [13]

As anticipated, the official stance has been echoed on Chinese social media platforms, all of which are under strict censorship control. Below are some responses on one of the news threads [20] on Weibo:

Personal experience and feeling: Wellbeing, prosperity and stability are the greatest democracy in this world.

Chinese civilization and western universal values are two different sets of concepts. The definitions of human rights are different as well. The riot in Hong Kong has taught us a lesson. Wish this country will always be stable and advancing.

Only Chinese people are qualified to talk about human rights in China.

Such an echo chamber on Chinese social media has generated a belief that China's political and economic systems are more advanced than the rest of the world, as reflected in the widespread discourse of China being a “strong country” (強國）. Political cartoonist Rebel Pepper is troubled by this “rosy reality” constructed by the Chinese Community Party, and compared the political propaganda to feeding drugs to the people:

The majority of Chinese people see me and other minority dissidents as unreasonable critics just eager to discredit China. We see more than the majority of Chinese people. What they can see is economic development and now the CCP has the confidence to issue a White Paper on 70 years of progress in human rights. We can’t even imagine that just a couple of years ago. In the past, China said only those who were well-fed would point their finger at China. Now the mainstream public opinion (in China) is that only losers who can’t make a good living are resentful of China. How should we address such a popular belief?

The question raised by Rebel Pepper is shared among the Chinese overseas dissents – as all media platforms in China is under strict censorship and the great firewall has blocked overseas information from majority of the Chinese people, it is almost impossible to have open debate on the “reality” as depicted by official propaganda that orchestrated by a massive number of online patriots.