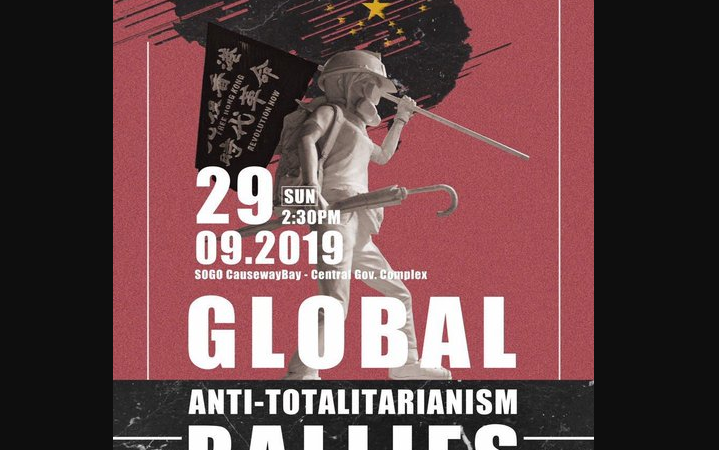 Online poster for the 929 global rally against totalitarianism via Twitter user: Hong Konger

The Hong Kong Human Rights and Democracy Act of 2019, a bill that was introduced in the United States Congress in June amidst the Hong Kong anti-extradition protests, has been approved by the U.S. Senate Foreign Relations Committee and the House Foreign Affairs Committee. The bill was approved on September 25, after a round of hearings attended by a number of Hong Kong pro-democracy activists.

Having been passed by the two committees, the bill will need to be voted on by the full membership of the Senate and House of Representatives. Hong Kong protesters will stage a Global Anti-Totalitarianism Rally on September 29 to further advocate for the legislation:

First proposed by Chris Smith and Marco Rubio, chair and co-chair of the Congressional-Executive Commission on China, the bill was written to support Hong Kong’s freedom and democracy against Beijing’s encroachment. A revised version was reintroduced to the House Committee on June 13, after the anti-extradition protests broke out.

This is not the first time that the United States taken such legislative measures. Back in 1992, the U.S. enacted the Hong Kong Policy Act to ensure bilateral ties with Hong Kong in the areas of trade and economics, finance, aviation, shipping, and technology — unique treatment that is based on the condition that Hong Kong’s autonomy, fortified under the 1984 Sino-British Joint Declaration, continues to sustain.

But Hong Kong’s autonomy has eroded rapidly since August 31, 2014, when the Standing Committee of the National People's Congress, China's national legislative body, imposed a pre-election mechanism that set limits for the 2017 Chief Executive election and the 2016 Legislative Council election in Hong Kong's Special Administrative Region. This was soon followed by other incidents: the abduction of Hong Kong booksellers, for instance, and the disqualification of lawmakers over oath taking.

Now, since the proposed introduction of the extradition bill would further undermine Hong Kong’s legal autonomy and affect foreigners who are travelling or residing in Hong Kong, the U.S. government saw the need to re-evaluate its relations with Hong Kong through this new legislation.

Under the drafted act, the U.S. Department of State shall report annually to Congress on Hong Kong’s autonomy and human rights status, and assess whether the U.S. should continue its unique bilateral relations.

The latest revised version further empowers U.S. authorities to sanction individuals who harmed the Sino-British Joint Declaration and the Basic Law, to the point where even their direct family members can have their visas voided.

For Hong Kong pro-democracy activists, international support is an important facet of balancing Beijing’s aggressive intervention of the city’s affairs and governance. After two massive protests on June 9 and 16, protesters used the G20 meeting in Osaka as an opportunity to secure support from the international community with the global #StandwithHK campaign.

Demonstrators staged a protest on June 26, where hundreds of protesters marched to 19 consulates of G20 nations urging their support against the extradition bill. Two days after, a series of crowdfunded full-page ads calling on readers to “Stand with Hong Kong at G20” was published in at least 10 international newspapers, including The New York Times, The Guardian, The Japan Times, Sudeutsche Zeitung, and The Chosun Ilbo.

As the U.S. Senate and House Committee started deliberating on the Hong Kong Human Rights and Democracy Act 2019, Hong Kong pro-democracy activists organized a series of lobby campaigns, including an online petition, a letter campaign, and a joint submission to the Senators and Representatives of the U.S. Congress by 22 Hong Kong professional groups.

On the ‘global frontline’ of human rights

During the hearing, Sharon Hom presented an overview of Hong Kong’s struggle for a democratic system since handover to China in 1997, stressing that Hong Kong demonstrators are not only fighting for the democratic future of 7.4 million people, but “holding the regional and global frontline on preserving human dignity and rights for all people”:

The past ‘summer of discontent’ is in fact part of years of ongoing resistance by the Hong Kong people against Beijing’s encroachment on Hong Kong’s autonomy, rights, and freedoms. This peaceful resistance has included mass demonstrations against the proposed Article 23 security legislation (2003), brainwashing of the so-called patriotic education (2012), and against the gutting of promises of genuine universal suffrage (2014). […]We need to first address the tensions that were baked into the One Country, Two Systems framework […] the Hong Kong example proves that dictatorship and democracy cannot co-exist.

Denise Ho also pointed out that the current struggle in Hong Kong is not just for the sake of one city:

This is not a plea for so-called ‘foreign interference’, nor for Hong Kong independence; this is a plea for universal human rights. This is a plea for democracy. This is a plea for the freedom to choose […] If Hong Kong falls, it would easily become the springboard for the totalitarian regime of China to push its rules and priorities overseas, utilizing its economic powers to conform others to their communist values.