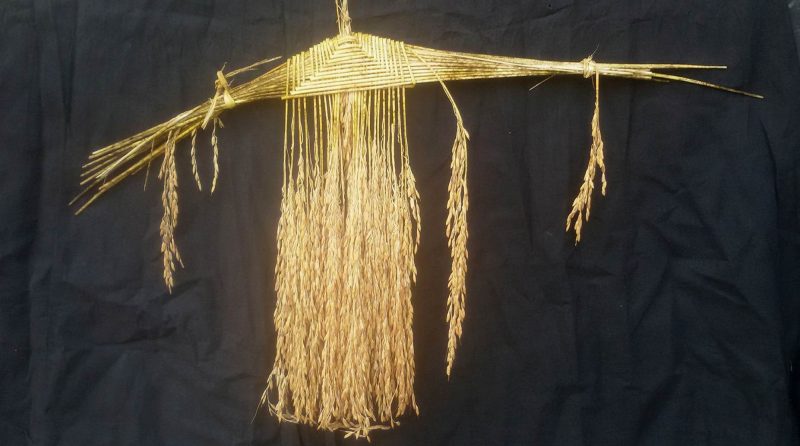 A ‘jhutti’ made from rice sheaves. Photo by CK Kalyan Tharu. Used with permission.

Rice has been a diet staple in Asian communities for centuries, so it is no surprise that this important food source has been a feature of artwork in the region. While some artists have sketched and painted this grain, other communities have continued the little-known, age-old practice of weaving rice sheaves into beautiful forms to decorate their homes.

In the southern Indian state of Kerala, kathirkula – rice sheaves woven together into a bunch – is hung in houses and temples. It is believed to bring good health, wealth and prosperity to the home.

“Nelkathir” is a bunch of artistically plaited bouquet of rice seeds, usually hung in front of the entrances to old ancestral homes (Tharavadu) in Kerala.

This symbolizes prosperity in homes. It is linked to a traditional custom called “Illam Nira”-(House filling with Paddy). This ritual heralds the farming and harvesting in Kerala. […] This can also be seen in front of all temples in Kerala as a symbol of opulence.

In the eastern Indian state of Odisha, jhoti or chita – a traditional Odia art made from rice paste – is drawn on walls and floors during festive occasions. During Deepawali, the festival of lights, motifs of paddy stacks or rice sheaves are drawn. The Odia Language and Culture Department states:

During this auspicious occasion, the mud walls and floors are decorated with murals in white rice paste or pithau. They are called jhoti or chita and are drawn not merely with the intention of decorating the house, but to establish a relationship between the mystical and the material, thus being highly symbolical and meaningful. […] For each occasion a specific motif is drawn on the floor or on the wall. For instance, in Lakshmipuja a stack of paddy or rice sheaves is drawn on the walls structured like a pyramid. […]

While jhoti are drawn on walls in India, a jhutti is made of rice sheaves in southern plains of Nepal just like Kerala’s kathirkula, but shaped into more intricate forms. After harvesting rice, select rice sheaves are woven into jhuttis and hung high on the meh (the bamboo pole to which the oxen are tethered while threshing rice). The Tharu people are especially known for preparing jhuttis for each variety of rice they harvest.

From left to right: kakahi – the comb, maur – the groom’s headdress, kauwa tholi – the crow’s beak and Patiya – the mat. Photo by CK Kalyan Tharu. Used with permission.

Jhuttis are of different shapes and sizes. They are inspired by the nature and the things around like, kauwa tholi – the crow’s beak, patiya – the mat, kakahi – the comb, jhunjhuna – the baby’s toy, bena – the fan, bakhari – the granary, maur – the headdress of a groom, among others.

The belief is that, after the rice is harvested, there remains nothing for the birds to peck at. The Jhutti became a symbol of love for nature among the Tharus as they were originally hung to provide food for the bird and Jhuttis made for each species of rice harvested.

In an interview with Global Voices, former President of the Siraha Chapter of Tharu Kalyankarini Sabha (a Tharu welfare organisation) Chandra Kishore Kalyan Tharu reiterated the importance of nature in the Jhutti making tradition:

Our ancestors loved and worshipped nature. They weaved Jhuttis so that the birds wouldn’t die of hunger after harvest.

However, this beautiful artistry is being forgotten in Nepal and the younger generation has almost forgotten the art of making jhuttis. It’s the need of the moment to preserve this age-old tradition of weaving rice sheaves into beautiful art forms.