Russia's return to the Parliamentary Assembly of the Council of Europe: Diplomacy or defeat? 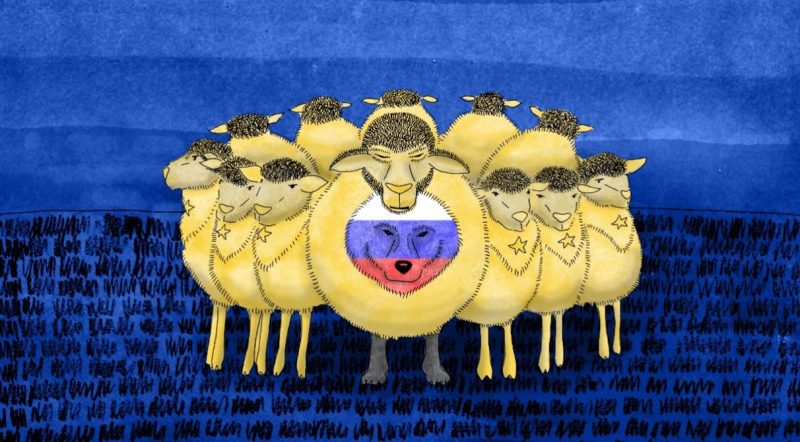 “A wolf in sheep's clothing.” Allowing Russia back in the PACE may encourage other oppressive leaders, critics worry. Cartoon courtesy of Anna Tóth (annatoth.com).

This article by Pavel Antonov and Ksenia Vakhrusheva originally appeared on BlueLink, a regional e-magazine covering Central and Eastern Europe. It is republished here via a content-sharing partnership with Global Voices.

Amending the Council of Europe’s (CoE) sanctioning rules to restore Russia’s voting rights in its Parliamentary Assembly (PACE) has divided democracy and human rights advocates. In spite of criticism for the 2014 annexation of Crimea and the Kremlin’s human rights’ record, influential groups such as the EU-Russia Civil Society Forum have backed Russia’s return as a “last hope for Russian citizens seeking justice for human rights violations.” They call for new rules to enable the organisation to suspend or expel members who fail to comply with its principles.

At its summer session on 24-28 June 2019, the PACE passed a resolution which restored the credentials of the Russian delegation. Proposals by Ukraine to impose further limitations on Russian participation were rejected. PACE also passed tough recommendations that Russia should implement, including: releasing the 24 detained Ukrainian sailors; and immediate payment of all financial contributions to the CoE. PACE also requested Russia’s full co-operation with the investigations of the shooting down of Malaysian Airlines’ flight MH17 and the murder of Boris Nemtsov, and urged vigorous measures to prevent violations of the human rights of lesbians, gays, bisexuals, transgender and intersex people, especially in Chechnya.

Critics, such as the US special representative on Ukraine Kurt Volker, saw the decision as abandoning the CoE’s own principles. Russia had been suspended from the voting rights in the PACE since April 2014 because of annexing the Crimea. Back then, most CoE members called the actions of Russia’s military forces in the Crimea a “persistent failure to honor its obligations and commitments” in a strong resolution. In response, Moscow ceased its membership dues, leaving a 53 million-euro-hole (58 million USD) in the CoE’s 2018 budget.

According to the former president of PACE Anne Brasseur, sanctions against the Russian delegation were taken after the annexation of Crimea, because it was “a clear violation of international law and that’s unacceptable”. But the CoE never excluded Russia formally. “[PACE] suspended their voting rights and then (…) [the Russian delegation] decided by themselves to leave, and even not to submit credentials later on. It was their own decision”, Brasseur explained for BlueLink Stories in a video interview at the General Assembly of the EU-Russia Civil Society Forum in May.

PACE’s move was condemned strongly by Ukraine. “This is not diplomacy, this is a surrender,” the country’s envoy to the CoE Dmytro Kuleba commented for The Guardian. According to his tweet on the same occasion, five other countries opposed the decision, so the fight to keep Russia out of the Parliamentary Assembly is not over.

Concessions for Russia create concerns within the EU, as they may encourage other governments to cut corners around human and democratic provisions for their citizens. International organisations such as CoE and OSCE are “facing challenges from the interpretation of what they were made for and what the commitment that their (member) states have agreed to actually means to today’s world,” warned Aleska Simkic, Deputy Head of EU’s Delegation to Russia.

Recent suppression of independent candidates for the Moscow City Council elections sends a clear signal that the Kremlin has no intention of complying with CoE’s principles. But having Russia expelled from the CoE is the last thing rights and democracy activists in the country want. On the contrary, they need the international body as the last resource of international pressure against the Kremlin. In response to recently documented electoral rights violations by authorities in Moscow and St Petersburg, 40 civil society organizations and activists appealed to the CoE to discuss the situation and include information about it in its forthcoming assessment of Russia’s implementation of the European Charter of Local Self-Government.

An opportunity to defend human rights 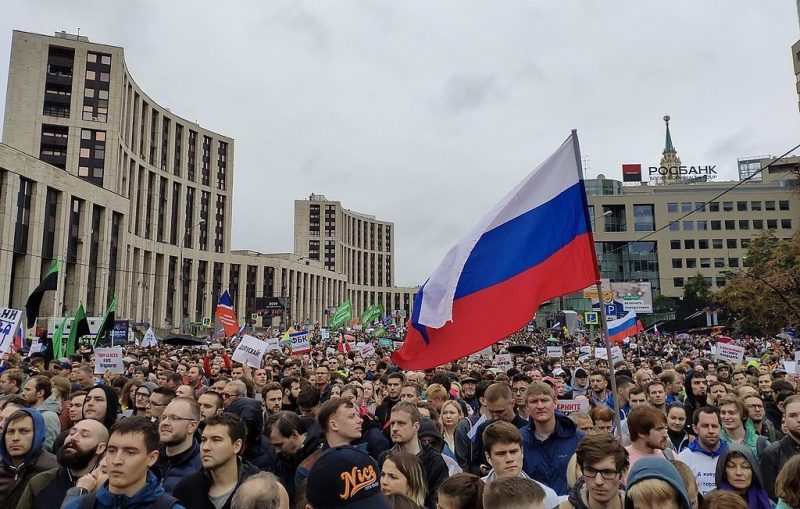 An example of rights violations in Russia is the deny to independent candidates to run for the Moscow City Council in City Duma elections in September 2019. On August 10 in Moscow citizens rallied in support of opposition candidates. Photo: putnik / Wikimedia (CC BY 4.0)

Earlier, a CoE-Russia contact group of human rights advocates and the Board of the EU-Russia Civil Society Forum appealed to all PACE members to return voting rights to Russian delegation. In a joint position, they called it “a logical final step” in the process of looking for a solution to the CoE-Russia crisis.

According to the civil society rights advocates, the resolution should not be seen as a threat to the future of CoE, but rather – as an opportunity to secure it. Its proposed amendments to the PACE Rules of Procedure do not eliminate, but only limit, the existing sanction mechanisms, they claim. Eliminating the opportunity to limit voting rights in the PACE, other member’s rights can be still suspended or withdrawn, ex. the right to table a motion for resolution or recommendation, to address questions to the Committee of Ministers, to be appointed rapporteur, to request an urgent or current affairs debate, to be candidate for elected posts within the Assembly, to be a member of election observation missions, to represent the Assembly in other Council of Europe bodies or at external events.

The human rights activists feared that not adopting any decision on the matter would most probably have led to Russia’s departure from the Council of Europe – with all the negative consequences this would cause for the Russian public and the CoE as a whole. “We are convinced that Russia’s departure from the CoE would not stop human rights violations and halt the authoritarian backslide in the country, or prevent Russian government’s aggressive behaviour in the international arena”, their statement said.

PACE’s June decision was formally justified as a means to enable Russia’s participation in the elections of the next Secretary-General. The Kremlin had called this a “crucial factor” for remaining a remember of the CoE.

Russia’s prolonged membership is beneficial for the country’s citizens who actively use the European Court of Human Rights (ECHR) – one of the CoE’s most effective mechanisms for human rights protection. In 2018 Russian nationals filed 11777 applications to the ECHR, which is 20 per cent of the total number. According to a report of Moscow-based human rights group Public Verdict, in 20 years of membership, the ECHR’s judges took 2013 decisions regarding Russia, imposing a total of 1.9 billion Euros (2.1 billion USD) in compensations. This suggests that remaining in the CoE is not exactly a victory for the Kremlin but rather a trade-off.

Instead of arguing about the symbolic importance of preserving the sanctions against Russia in the PACE and mobilising significant efforts for this, those who really care about compelling the Russian authorities to observe international law should rather focus on finding other, more effective ways and tools for ensuring that, the Initiative Group of Russian human rights defenders and the Board of the EU-Russia Civil Society Forum believe.

The organisations stated that the continued membership of Russia in the CoE “should be actively used by all concerned parties as an opportunity to build up stronger pressure on Russia to ensure implementation of its obligations”. The organizations propose the development of new and more intense mechanisms to intervene with respect of Russia’s violations of international law, that should be applied in the Council of Europe, in particular with respect to Crimea and Donbas.

The withdrawal or lack of enthusiasm by Russia and some other member states for the values of human rights worries old-school European politicians such as Anne Brasseur as well. “It is not about the country, it’s about the protection of the citizens of those 47 member states where every citizen must have the guarantee to have the fundamental freedoms: to have freedom of expression; freedom of the media; freedom of association. And the CoE is really the organization which guarantees those fundamental freedoms,” Brasseur commented.

In response to the concerns over the weakening of CoE’s sanctioning rules, the human rights’ defenders call for a critical review and upgrade of the CoE’s toolbox to address grave and systemic violations of the organisation’s norms by member states. Following upon to the Committee of Ministers’ proposal to develop a new procedure for a coordinated response to such situations, would be much better and stronger than the existing symbolic sanctions within PACE, they pointed out. Such procedure should include a possibility for suspension or expulsion of a member state.

Developing such lines of action would demonstrate that the PACE has not just resorted to a short-term tactical solution to the crisis but is working on a longer-term strategy of responding to violations committed by Russia, and, potentially, by any other member states, signatories believe.