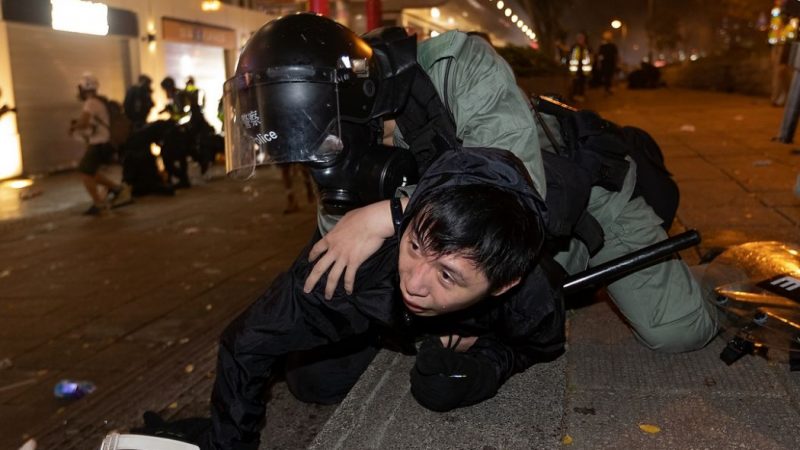 This post was originally written by Jennifer Creery and published on Hong Kong Free Press on September 20, 2019. It is republished on Global Voices under a content partnership agreement.

A new report from NGO Amnesty International says that Hong Kong police have used reckless tactics and retaliatory violence in their crackdown on protesters over the summer, resulting in injuries such as broken bones and internal bleeding.

The report — based on 38 interviews with arrestees, medical workers and lawyers, as well as reviewed footage — detailed a “disturbing pattern” of improper police conduct during the city’s 15 weeks of protests, behaviour which Amnesty said sometimes amounted to torture. Nicholas Bequelin, the East Asia director at Amnesty, said:

The Hong Kong police’s heavy-handed crowd-control response on the streets has been live-streamed for the world to see. Much less visible is the plethora of police abuses against protesters that take place out of sight. The evidence leaves little room for doubt — in an apparent thirst for retaliation, Hong Kong’s security forces have engaged in a disturbing pattern of reckless and unlawful tactics against people during the protests.

In its report, the NGO cited excessive use of force, beatings, arbitrary arrests, degrading treatment, and delayed access to medical care and counsel as examples of such tactics, while identifying elite officers — known as “raptors” — as the main perpetrators.

Over 1,400 people have been arrested in Hong Kong’s summer of dissent, sparked by a soon-to-be-withdrawn extradition bill which would have enabled case-by-case fugitive transfers to China. The protests morphed into sometimes violent displays of unrest over Beijing’s encroachment and alleged police brutality, among other grievances. 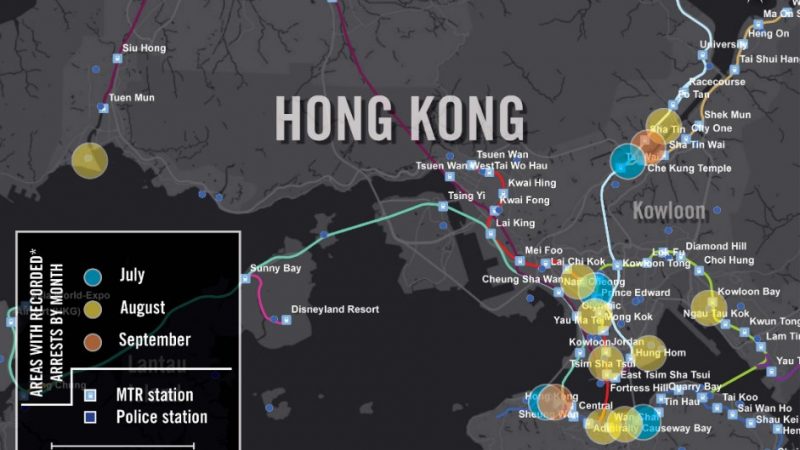 Amnesty interviewed 21 arrestees, 18 of whom said they were hospitalised as a result of their mistreatment, with three of them spending at least five days in hospital.

One man told Amnesty that, when he refused to answer a question during his arrest in the New Territories in August, officers beat him and threatened to break his hands if he tried to protect himself. He was quoted in the report:

The man was later hospitalised for several days with a bone fracture and internal bleeding. He also reported that an officer forcibly opened his eye and shone a laser beam into it, saying, “Don’t you like to point this at people?”

Lasers were typically used at protests to irritate officers and in August 2019, police arrested a student leader for possession of offensive weapons after he was found carrying ten laser pointers.

Another man, who suffered multiple fractures to his arm during his arrest in August, said that despite immediately asking to be taken to the hospital, he was denied medical care for five hours while in detention.

Two other interviewees described instances where they were zip-tied on the street and made to inhale tear gas for long periods of time.

Police representatives have consistently denied misconduct, saying that officers use the minimum force necessary and exercise a high level of restraint during protests.

Those missing links, they basically did not mention clearly about the social environment in Hong Kong in recent months. I must re-emphasise that we are facing an unprecedented challenge to the rule of law.

Police are duty-bound to enforce the law impartially in these situations. Given this social environment, where a large number of radical protesters break the law recklessly, it is increasingly difficult for Police to enforce the law.

However, ahead of the report’s release, Bequelin said the abuses Amnesty recorded were in clear violation of international human rights law:

Time and again, police officers meted out violence prior to and during arrests, even when the individual had been restrained or detained. The use of force was therefore clearly excessive, violating international human rights law.

Given the pervasiveness of the abuses we found, it is clear that the Hong Kong Police Force is no longer in a position to investigate itself and remedy the widespread unlawful suppression of protesters. Amnesty International is urgently calling for an independent, impartial investigation aimed at delivering prosecutions, justice and reparation, as there is little trust in existing internal mechanisms such as the Independent Police Complaints Commission.

The anti-extradition protests in Hong Kong have, since June 2019, evolved into a pro-democracy movement advocating for government accountability against Beijing's encroachment. To read more about the protests, please visit our special page.