In a Pakistani town, Hindu-Muslim relations are tested after a Hindu temple is vandalised

Pakistan has one of the strictest anti-blasphemy laws 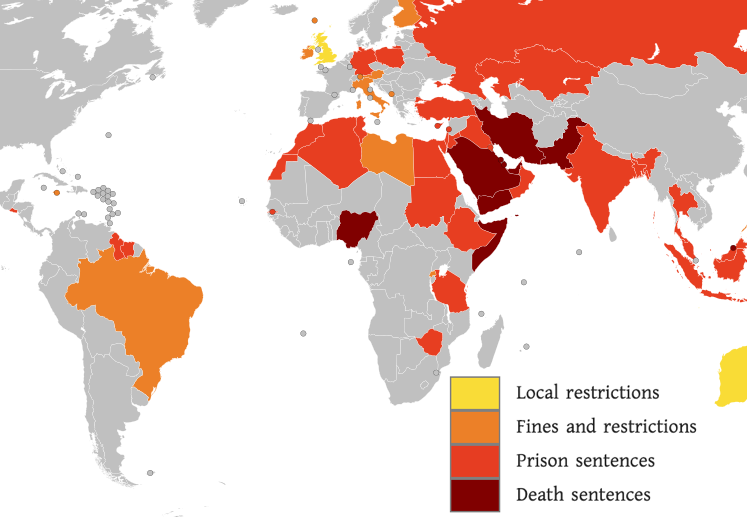 Pakistan has one of the strictest anti-blasphemy laws in the world which is often misued. Image via Wikipedia. CC BY-SA 4.0

On 15 September 2019, protests broke out in the town of Ghotki in southeast Pakistan. Protesters were responding to an alleged incident of blasphemy against the Prophet Muhammad by a member of the Hindu community. The protestors vandalized a Hindu temple and damaged the Sindh Public School where the alleged blasphemy was believed to have taken place. The local Hindu community remained indoors out of fear as a number of videos surfaced on social media of stick-wielding protesters chanting slogans.

In response to the violent reactions of the protesters, members of both the Muslim and Hindu communities spoke out against the vandals with some netizens pointing out how religious extremists are bolstered by the blasphemy law.

The alleged act of blasphemy

Notan Lal, a member of the Hindu community and the owner of the Sindh Public School, was accused of saying blasphemous remarks to his student Muhammad Ihtisham. Ihtisam's father, Abdul Aziz Rajput, lodged a First Information Report (FIR) under Article 295(c) of the Pakistan Penal Code which deals with “derogatory remarks in respect of the Holy Prophet”.

According to reports, the student Ihtisham admitted to exaggerating the blasphemy accusation because he was angry with the principal Notan Lal for scolding him. Ihtisam went on to ask Notan Lan for forgiveness.

A Hindu principal in Ghotki, Sindh has purportedly been accused of committing blasphemy by extremists, who have vandalised his school. Hindu community in the area is in danger. They must be provided with protection immediately! Video & report via Shankar Meghwar pic.twitter.com/Xctf04brli

When videos of the vandalism started circulating on social media there was an uproar over the damage to the temple, with people condemning the incident and demanding the police to arrest the culprits immediately.

#Ghotki As a Muslim, a Pakistani, i m ashamed today & i want to apologise to our Pakistani Hindu community. We all must seek forgiveness from Allah for this atrocity. The time has come to launch an organised ideological effort against this mindset which results in such incidents. pic.twitter.com/XpBivehBxl

It is reported that Hindu teacher has been accused of blasphemy in Ghotki.

We know about how people accuse non-Muslims of committing blasphemy. State has responsibility to protect its citizens and take action against those who misuse blasphemy law
1/2
pic.twitter.com/0VT9ou04IH

Mob ruined school and then destroyed Hindu Temple over the allegation of blasphemy in Ghotki.

Government ought to arrest those ruined Temple and school, no one has right to harm other religious places. And, state must enact a law to stop misuse of blasphemy. 2/2

Yes we are trying to deal with a serious situation in a cool, calculated, impartial and professional manner. Moderate and educated sections of society must fully support our earnest efforts to do justice and maintain peace in Ghotki, please https://t.co/6beA0dgtCx

The inspector general kept updating his social media feed with the situation:

Alleged accused in a sensitive case of Ghotki is now in the custody of Police. Situation in Ghotki is back to normal within 12 hours.
Fair investigation is being done after confirming facts & justice ensured. Cases against hooligans are being registered & miscreants being nabbed.

According to the latest updates, the police registered three cases against rioters for vandalism, threats and road blockages.

There were speculations that some of the protestors were followers of a local religious leader Pir Abdul Haq alias Mian Mithu, who is widely accused of involvement in forced conversion of Hindu women in Sindh. However according to the police, Mian Mithu was not in the town that day and his son was part of the peace committee that met with the Hindu community later in the day, still, a hashtag was trending on social media to arrest Mian Mithu:

Does he need any introduction? He forcibly converts our daughters, misuses religion and incites violence against #Hindus. Such monsters bring a bad name to #Pakistan.

Let's #retweet this to make our voice heard & get him arrested. pic.twitter.com/VjTyMzrhh4

The Human Rights Commission of Pakistan has condemned the incident and asked the authorities to intervene immediately to bring law and order in the area.

#Ghotki The authorities must take prompt action to quell the violence and ensure the safety of the school principal being targeted. The video circulated earlier is chilling: mob violence against a member of a religious minority is barbaric, unacceptable. https://t.co/0OrxUsO2fV

Pakistan Tehreek-i-Insaf (PTI) Member of the National Assembly Ramesh Kumar Vankwani, who heads the Pakistan Hindu Council, helped to keep the accused Notan Lal safe. Lal was shifted to an undisclosed location to keep him away from the mobs and to be handed over to the police as needed.

Despite the chaos in the area, a large number of people from Ghotki came forward to support the Hindu community. Some Muslim elders not only stayed up the whole night in the temples to support them, but they also joined peace rallies, helped the police maintain peace, and sent out messages to their followers to respect the sanctity of places of worship.

Yesterday we visited the Sacho Satram Das temple&met the Hindu community, we also met the local Islamic clerics&scholars.We assure that a fair investigation would be conducted after confirmation of the facts.Justice will prevail. Now the situation in #Ghotki is back to normal. pic.twitter.com/U2y2SzmKTs

After the murder of the Governor of Punjab Salman Taseer in 2011 for his views on the country's blasphemy law, discussions around Pakistan’s blasphemy law have grown. Pakistan inhertited the blasphemy laws enacted by British colonial authorities and made them severe by including elements from Muslim Sharia law during the 1980s making it one of the strictest anti-blasphemy laws. In the past three decades, thousands have been arrested and dozens of people have been reportedly murdered following blasphemy allegations.

Earlier, people did not talk about it out of fear of backlash but now people openly discuss how Aasia Bibi, Mashal Khan, Junaid Hafeez, Shama Shehzad and others have suffered at the hands of religious extremists and the blasphemy law.