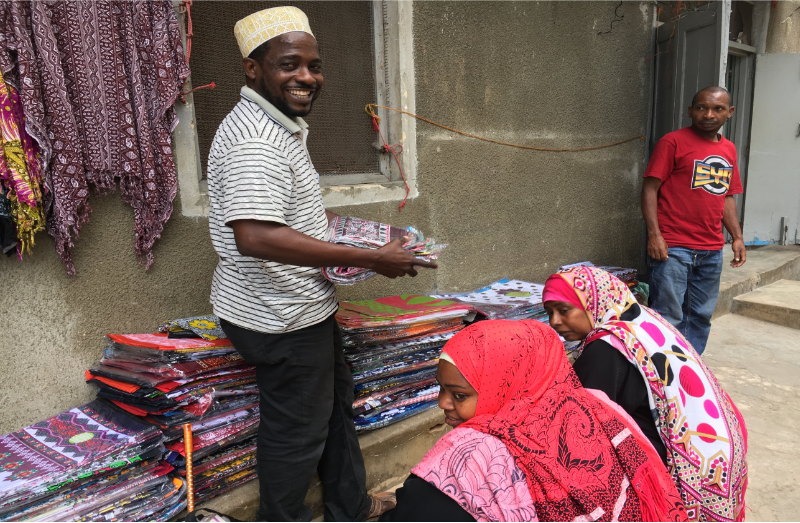 Every day in Zanzibar, women and men from all over the islands converge in Stone Town, the historic capital, to purchase kanga — colorful, patterned textiles sold in pairs that usually come with a Swahili message.

In August, kanga customers were shocked to discover that Stone Town authorities had cleared the outdoor kanga stalls in Darajani market. At least 25 active kanga dealers — some with stalls for nearly 30 years —were forced to leave, abruptly halting their street-side businesses.

Kanga are intricately woven into Swahili coastal culture — the dealers who sell kangas in the Darajani market are wordsmiths and philosophers as a job requirement. Why? Kanga are exchanged between and among friends, family and lovers to communicate and express misemo or Swahili “sayings” that are sometimes difficult or taboo; kanga dealers are central to the experience of selecting just the right one to match the need or occasion. Most kanga dealers have memorized hundreds of Swahili messages by heart and can readily identify kanga by its pattern and message. 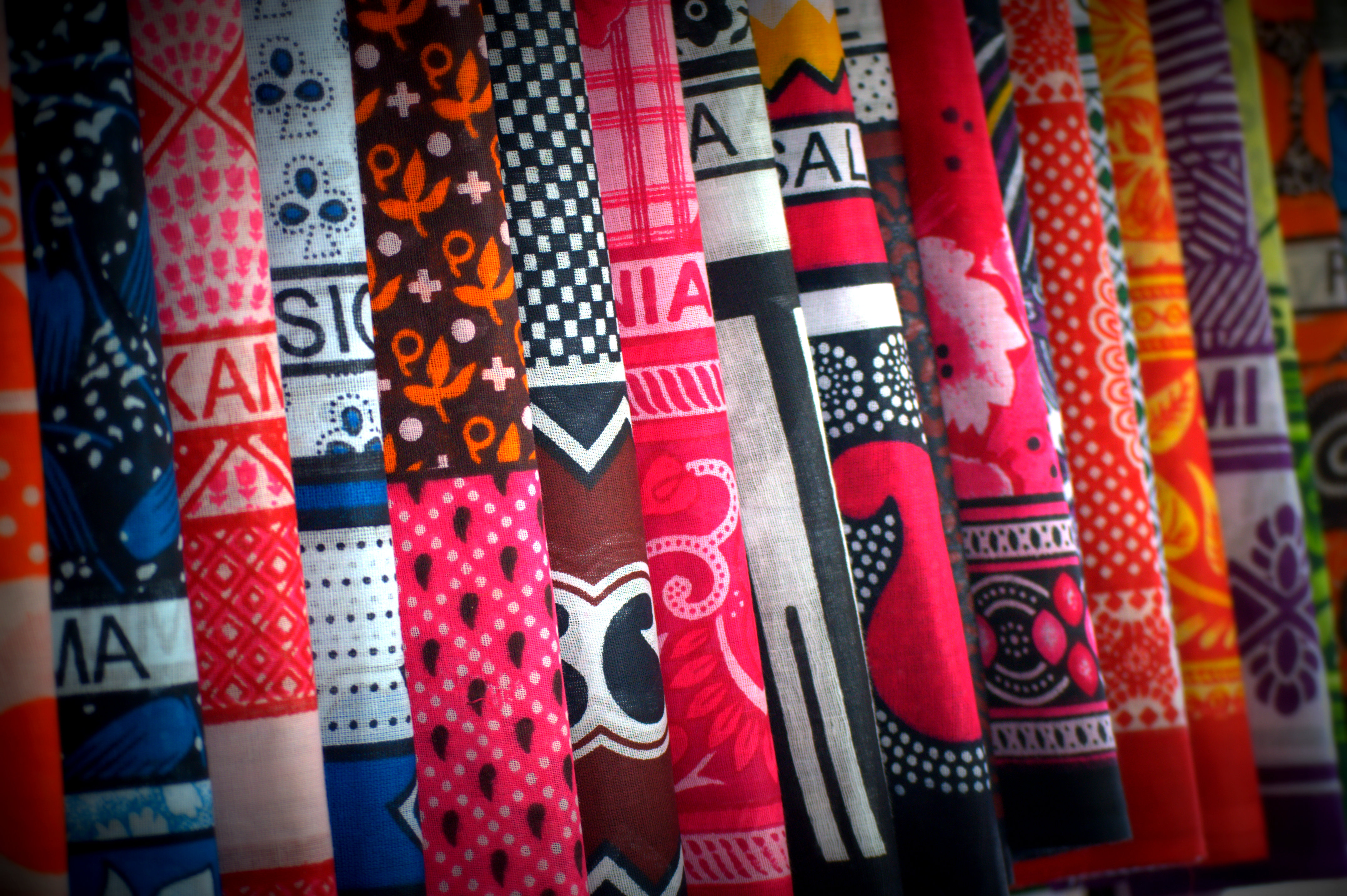 An array of colorful kanga on display in the market. Photo by Pernille Bærendtsen, used with permission.

According to long-time kanga dealer Mohammed Abdallah Moody, kanga dealers with stalls along Chavda-Mkunazini Street, known as “the kanga market,” received a letter from the Stone Town Conservation and Development Authority (STCDA) on July 26, 2019, explaining that the kanga dealers had two days to pack up their stalls and leave. 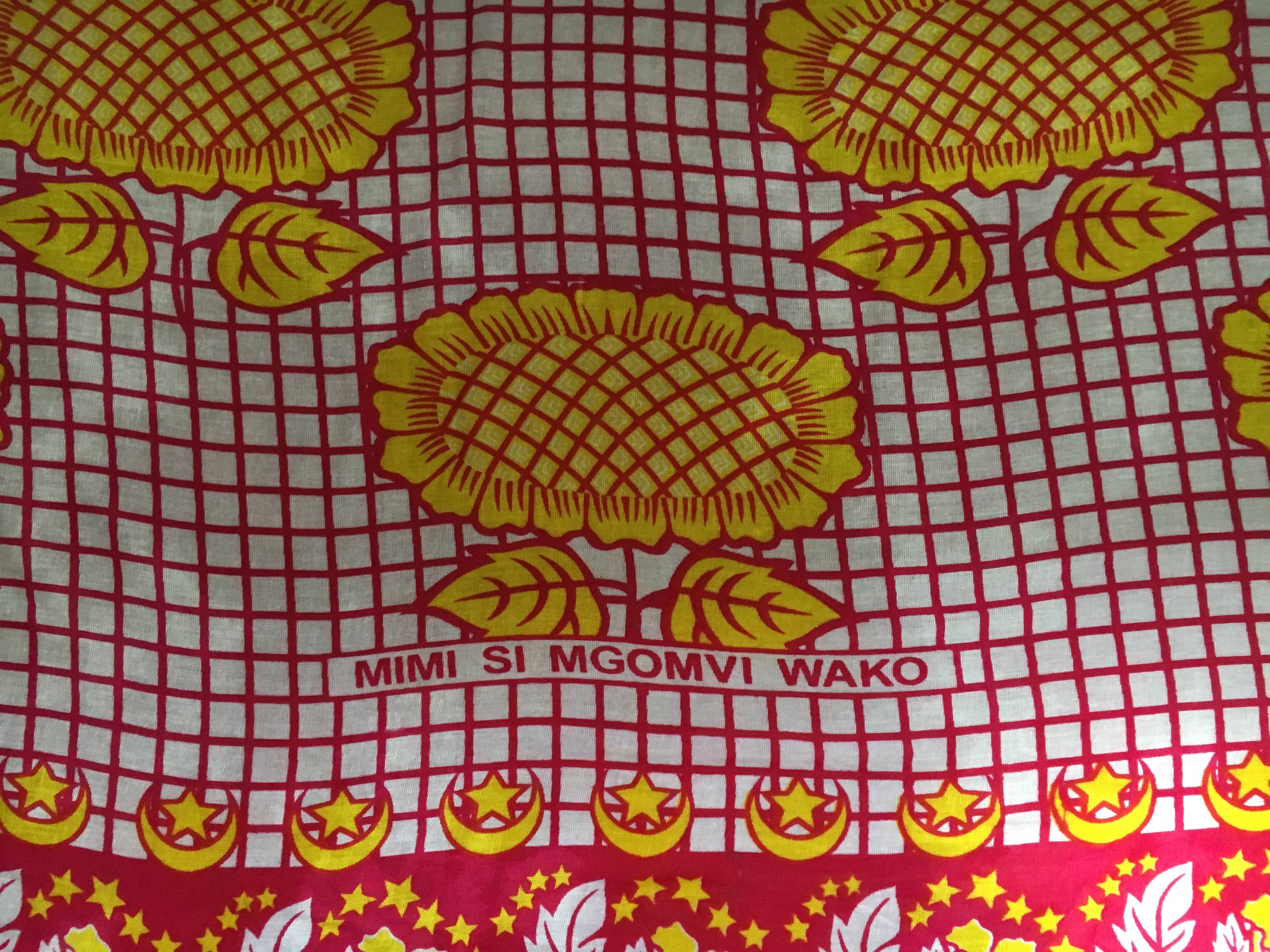 Kanga usually come with a message in Swahili and are exchanged to express feelings. This one says “Mimi si mgomvi wako” or “I'm not your enemy” in English.

Moody says some dealers have had no choice but to go underground and sell their kanga from other storefronts while they sort out the details with authorities. If caught selling kanga on the street, they could face fines up to 500,000 Tanzanian shillings (about $250 United States dollars) or up to six months in jail. 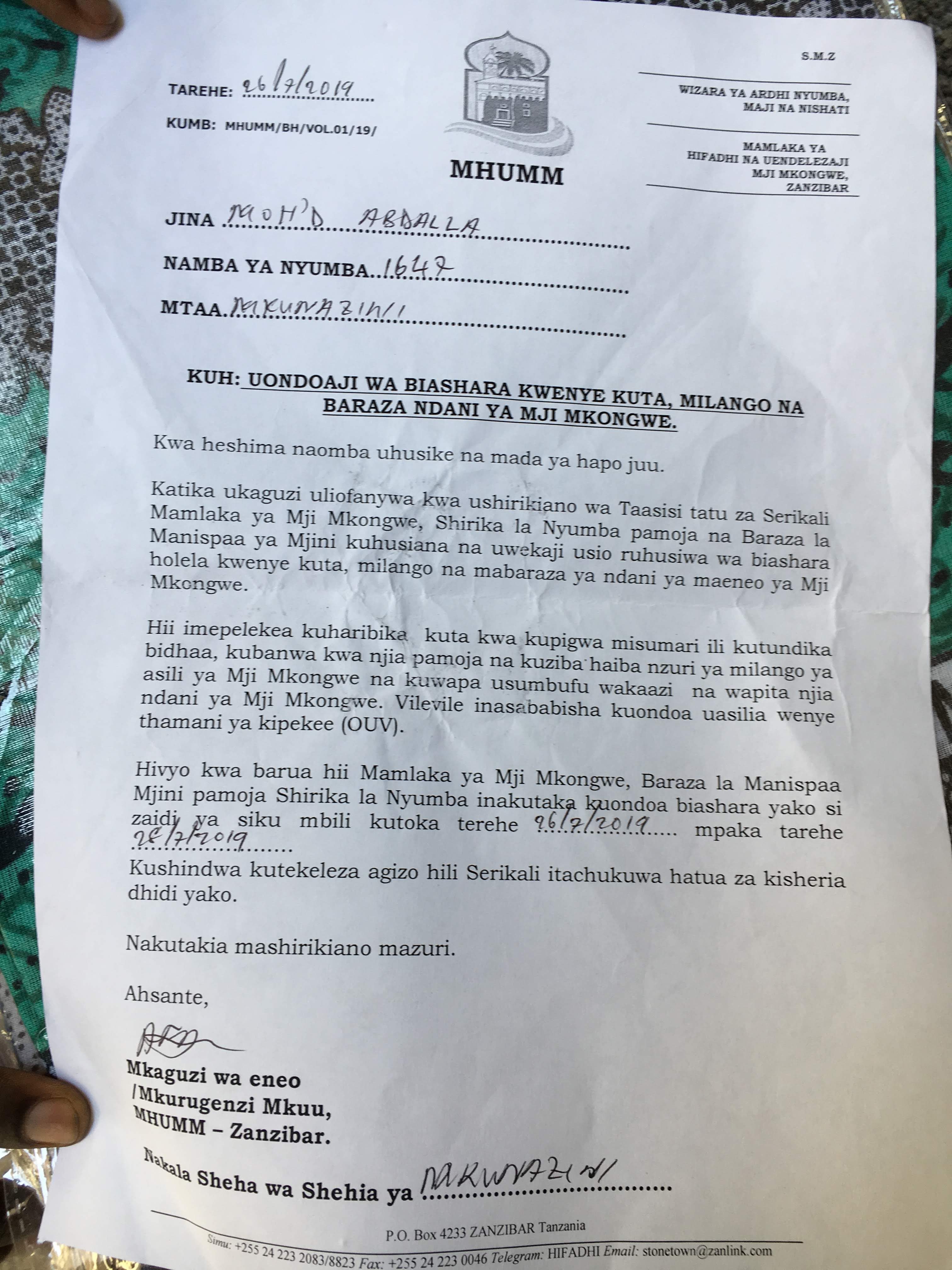 A letter from the Stone Town Conservation and Development Authority tells kanga dealers they have two days to leave. Photo by Amanda Leigh Lichtenstein, used with permission.

The letter states that the kanga sellers are being asked to leave to due to their “unauthorized placement of informal businesses on the walls, gates, and inner councils of the [Stone Town] areas.”

This has led to the destruction of walls [due to] nailing it to hang products, cluttering of the passageways, and impinging on the charm of Stone Town's original doorways. Similarly, it reduces their original value.

Moody explains that the kanga dealers pay the city 2,000 Tanzanian shillings (.90 USD) per day or approximately 60,000 TZS per month ($29 USD) to run their outdoor kanga stalls. He says they held licenses until STCDA discontinued licensure in 2015.

Said Juma Khamis, another kanga dealer, said that in 2016, their group of 30 kanga sellers established an official association called “The Kanga Sellers of Chavda” to advocate for their rights to sell their goods and strengthen their businesses as a collective. He said:

We've lost a lot of customers since we were told to leave. More than a lot. Some have heard that we can't sell our kangas anymore. Some still come here expecting us to have kanga to sell. It's unsettling.

Cultural heritage preservation — at what cost?

In 2001, UNESCO designated the historic old city of Stone Town a World Heritage site, elevating it to the same status as Egypt's pyramids, or India's Taj Mahal. Amina Ahmada, with Zanzibar Stone Town Heritage Society, a nongovernmental organization, said the city has gone through a series of changes over the last few years in an island-wide effort to ramp of cultural heritage preservation — with a specific focus on Stone Town as a central tourist hub:

We work with the community to help them understand the value of their collective inheritance. Some of the [Stone Town] residents are living in very valuable, old buildings but have no idea of their historic value.

With a strong emphasis on restoration and preservation of historic architecture and sites, the city has taken measures to crack down on what it considers illegal businesses that impede visual access to the unique architectural charms and cultural heritage of the Old City.

In the 1830s, the kings of Oman shifted their seat of power from Muscat to Stone Town and ruled in the region until 1963, overseeing a lucrative clove trade largely fueled by slave labor.

According to UNESCO, Stone Town architecture — a fusion of Arab, Indian and African structures that reflect thousands of years of Indian Ocean trade between the Gulf, India and the Swahili coast — is protected under the 2002 Ancient Monuments Preservation Act. In 1985, The STCDA was created and later produced the 1994 Stone Town Conservation and Development Act, which led to the development of a master plan to “safeguard, conserve and develop the values” of Stone Town. Today, the STCDA follows the Stone Town Conservation and Development Authority Act of 2010, which provides guidance on compliance, lease revocation, enforcement and other relevant matters.

On Friday, August 23, authorities also issued a letter to ferry ticket agents in the Malindi neighborhood and told them that their shops were “illegal and “dirty.” By Monday, several businesses had been destroyed. Mwanjabu Mohamad, a ticket agent, said she was home when she got a call that her office had been affected, according to her testimony on KTV-TV.

Ahmada said Stone Town is filled with 18th and 19th-century buildings, some of which are inhabited and owned by private residents who are unaware of their historic value. Buildings with “wakf” status, are, according to Islamic law, spiritually designated charitable properties that can not be renovated or changed without strict adherence to laws administered by the Zanzibar Waqf and Trust Commission, along with the STCDA, including privately held family homes. 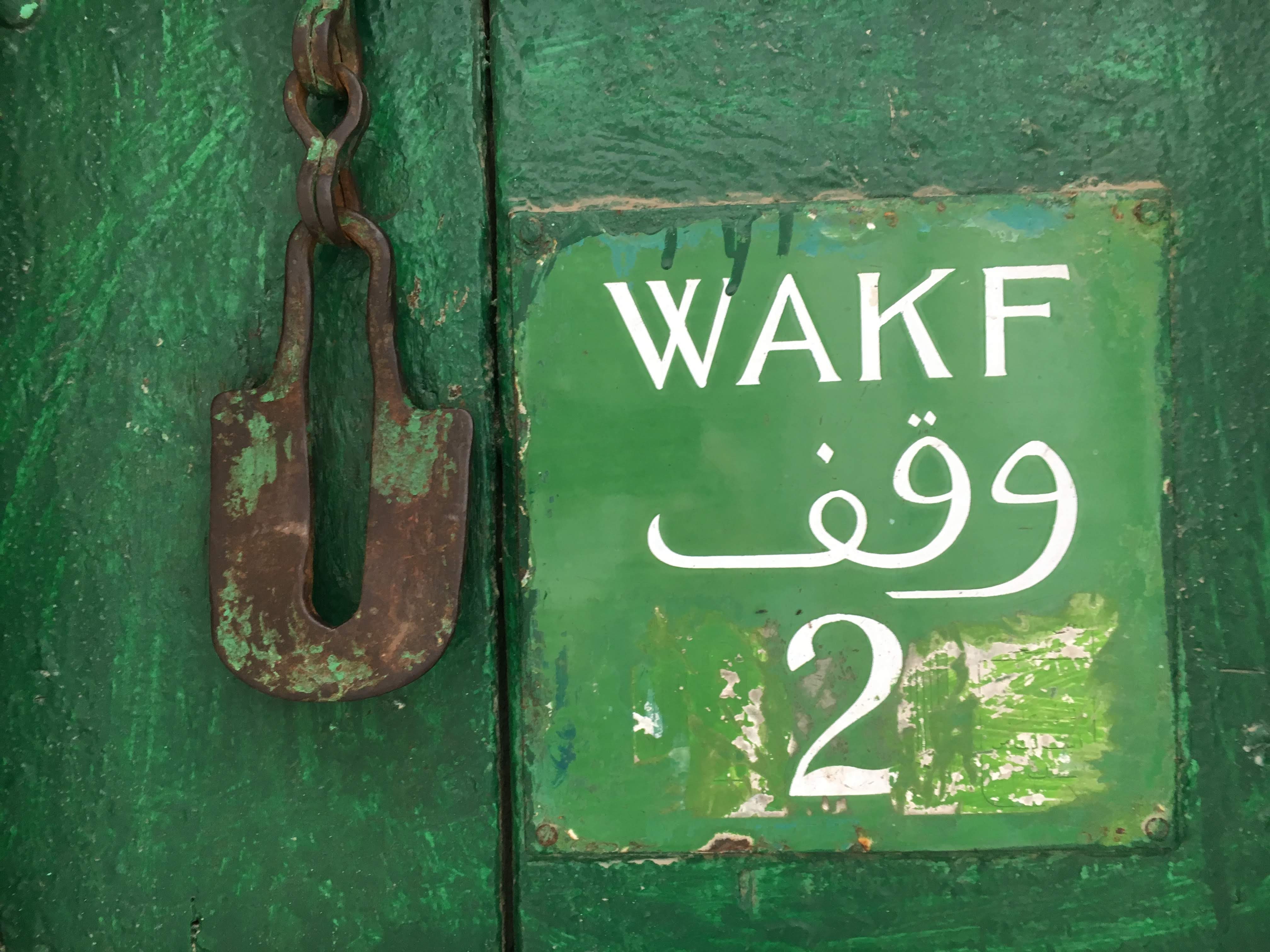 Buildings with Wakf status can not be sold, bought or inherited for profit. Any repairs or renovations must follow strict guidelines by Stone Town authorities. Photo by Amanda Leigh Lichtenstein, used with permission.

Moody, the kanga dealer, insists that none of the buildings in the kanga market hold Wakf status, as far as he knows, and the privately-owned buildings in front of which they've set up their street-side shops for nearly 30 years have their approval as well. Moody said:

We're hungry. We need to eat. We have families to feed. So, we've had to move back [to the market] little by little.

He said the group wrote a letter to the STCDA asking for a meeting to discuss their situation so that the business of kanga culture continues to thrive.

The hope is that Stone Town authorities recognize kanga sellers as an essential aspect of Swahili heritage and culture and find a solution that benefits everyone. 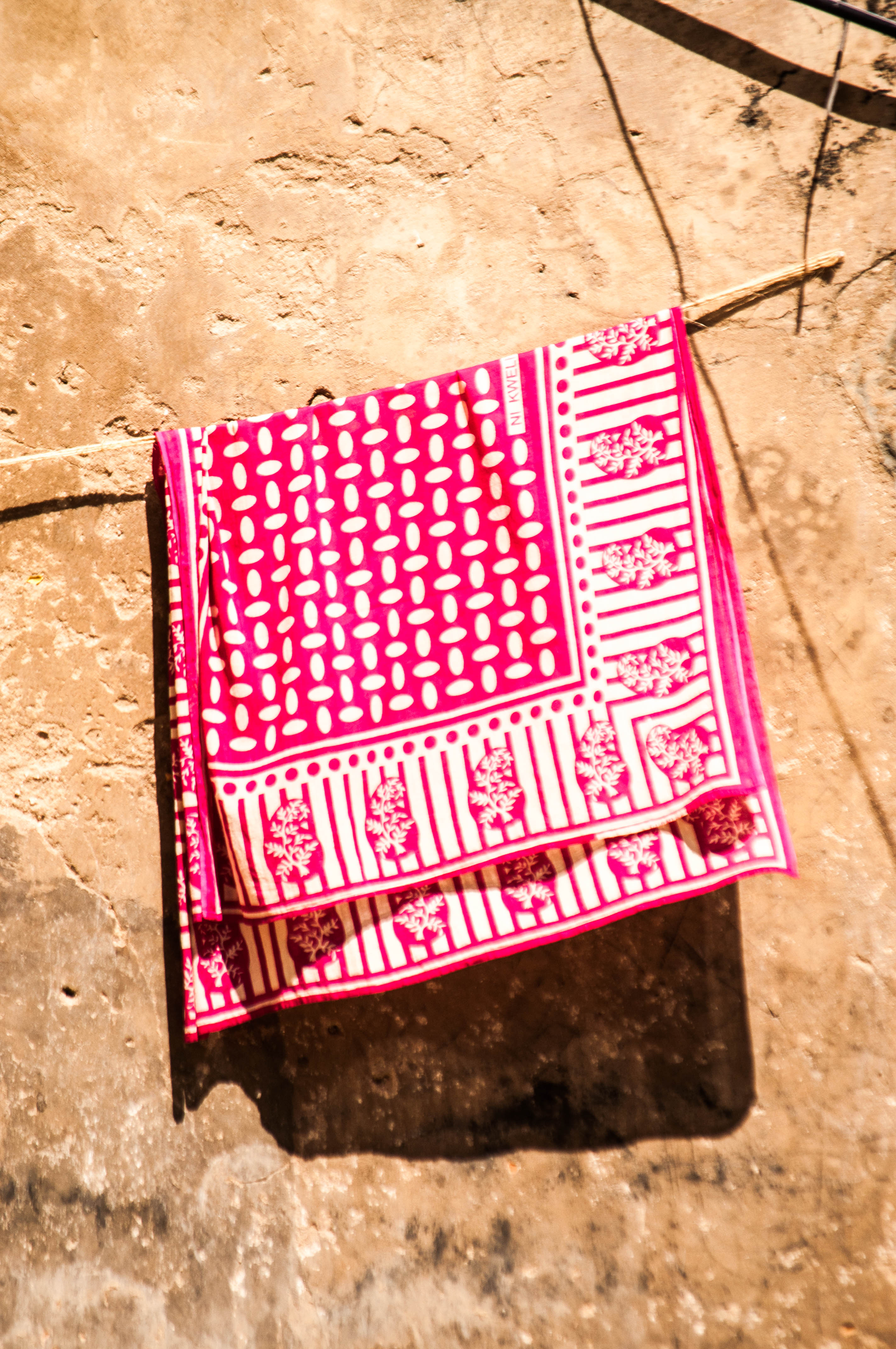 A kanga hangs on the line to dry. Photo by Pernille Bærendtsen, used with permission.