They've requested asylum from Canada and help from the UN 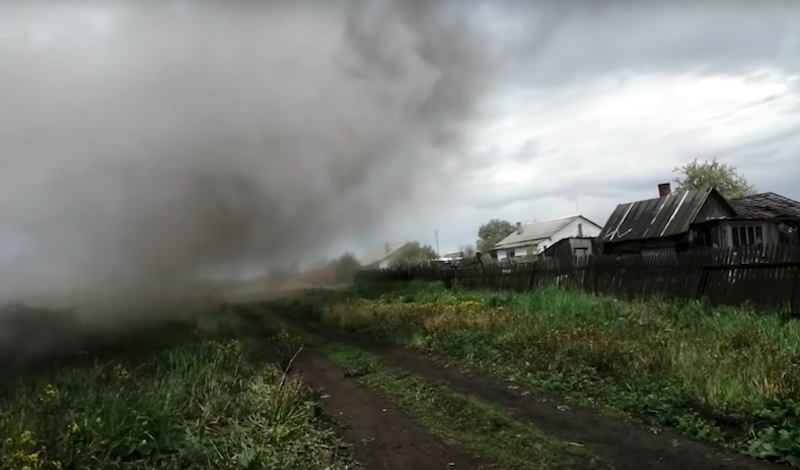 As fires rage across wide swathes of Siberia’s forests, residents of one town are battling another ecological menace: open-pit mines.

Kiselyovsk is a town of 90,000 which lies in the Kuzbass, a large coal mining basin in the Kemerovo Region of southwestern Siberia. The town has made headlines for its terrible air quality and recurring “black snows,” both resulting from surrounding open-air coal mines.

But now, the people of Kiselyovsk have had enough: they have recorded YouTube videos in which they appeal to Canada, the UN Secretary-General and the International Criminal Court for assistance. The first appeal was recorded in June 2019 when, tired of inaction from their local government and mining companies, Kiselyovsk residents gathered in a field to read out the following message in a 12-minute recording:

Our region is rich in coal and today barbaric methods are used for mining: open-pit mining, ignoring that there are residential homes next to the massive open-pit mines. There are 9 open-pit mines operating within Kiselyovsk’s city limits. There are 90,000 people living in the city, and the majority live near these mines. This winter, the whole world saw our black snow. We were gasping for air in the city because of coal dust and emissions from mining trucks. Our kids couldn’t go out to play for almost the whole winter, which is just as long as Canada’s. Kids were getting sick from the smog and the coal dust hanging in the air.

They then addressed Canadian Prime Minister Justin Trudeau directly, asking that he consider their request for asylum on the basis of social and class discrimination. They describe their Catch-22: they would like to leave Kiselyovsk, they say, but their homes aren’t worth much owing to the area's poor environmental conditions.

Even if they could sell their houses, they say, nobody would voluntarily move to Kiselyovsk. Even if they could move to another part of Russia, they say, there’s no guarantee that natural resource exploitation wouldn't force them to relocate again. Therefore, the people of Kiselyovsk request asylum in Canada on the grounds that, as they put it, the country has a similar climate and landscape to their native Kemerovo Region (though it must be added that Trudeau has a mixed record on environmental issues, as shown by his support for carbon taxes while encouraging the development of more oil pipelines).

Trudeau isn't the only world leader the people of Kiselyovsk have appealed to. They also reached out to the UN Secretary-General António Guterres, asking him to raise the issue with Russia's representatives to the international organization. Furthermore, they told Guterres that their many appeals to Vladimir Putin have gone unanswered, while also wondering whether the Russian president was getting the full truth about the situation in Kiselyovsk from his subordinates. Therefore, the appeal should not necessarily be read as strong criticism of the Russian president; in fact, the townspeople added that they hoped that Putin would force those guilty of ruining their local environment to make amends.

Nevertheless, the Kiselyovsk residents have highlighted a profound disconnect between the Russian government's domestic agenda and the stated objectives of its foreign policy:

Our country assists many others like Syria and the Donetsk and Lugansk regions [a reference to the war-torn regions in the east of Ukraine that declared independence as “people’s republics” in 2014 and continue to receive Russian military aid to this day] Our government forgives the massive debts of other countries, but it seems they’ve forgotten their own citizens in the Kuzbass. We’re people too, after all. Our kids are also living. We haven’t done anyone any harm, so why should we have to live in these intolerable conditions? Reckless resource development is a disaster for all of Russia; open-pit coal mining has led to a situation which we, its victims, consider to be a real genocide…

The response from Canada came within a few days. On June 11, the country's immigration agency said that asylum is usually only granted when the applicant has already left their country and has no desire to return.

The Russian authorities also responded; on 10 June, the governor of the Kemerovo Region instructed his deputies and the mayor of Kiselyovsk to meet with residents to discuss their issues. The governor’s office stressed that because of Kiselyovsk’s history as a coal mining town and its dependence on the industry today, it would be difficult to change the situation overnight. Local city officials also pointed out that all the local mining enterprises have ecological plans in place, but conceded that these were long term strategies unlikely to produce immediate changes.

But in subsequent months, the mayor’s office has also obstructed efforts for the townspeople to raise their grievances. In early September, a local journalist was warned that only one-on-one interviews with local residents could be taken without prior permission from the local authorities. Interviews with large groups of residents, the mayor’s office continued, would be considered illegal and forbidden under Russia’s particularly restrictive laws on public gatherings.

Nevertheless, some Kiselyovsk residents have carried on undeterred. At the end of August 2019, another video message was filmed, this time addressed to the president of the International Criminal Court (ICC), Chile Eboe-Osuji, and its chief prosecutor, Fatou Bensouda. Citing the ever-increasing levels of harmful substances in the city’s air, the establishment of illegal dumpsites, and hazardous fires, residents implored the ICC to open a case based on Article Six and Article Seven of the Rome Statute, the establishing treaty of the ICC. These articles contain provisions for cases of genocide and crimes against humanity. The Russian government withdrew itself as a signatory of the ICC’s Rome Statute in 2016 and, as The Guardian reports, had never fully subjected itself to the ICC’s jurisdiction. The fact that these concerned citizens tried anyway demonstrates the strength of their desire for justice.

The video appeals from Kiselyovsk are not the only example of the increasingly imaginative methods which the inhabitants of Russia’s regions are using to attract attention to local issues which they feel are being ignored. In another display of innovative attention gathering, on September 1 the inhabitants of Olkhon on the shores of Russia’s Lake Baikal, one of the world's largest largest freshwater lakes, erected a bust to Putin as the “Guarantor of the Constitution” to get media attention towards local issues of rule of law and land use. In recent years, environmental issues have increasingly become mobilising factors across Russia; ordinary people from across the country are coming together to compare notes and express their outrage over local issues like illegal dumps and illegal exploitation of natural resources.

These movements cut across the pro- or anti-Kremlin political divisions, indicating that Russian citizens have the capacity to meaningfully affect politics when focused on local problems. The scale of issues like climate change or corruption can make these issues seem insurmountable, but local focus is what gives activists and engaged citizens hope for change. And after the recent scandals around Moscow’s local elections, the example of Kiselyovsk is even more important: it shows that many understand that politics does not begin or end at the ballot box.