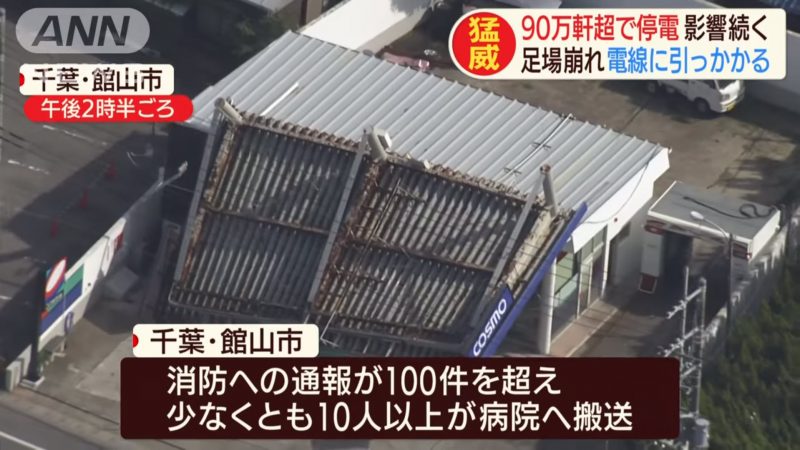 Residents of communities located just outside of Tokyo feel devastation caused by a major typhoon has been largely overlooked by national media.

After battering Japanese island communities to the south of Tokyo, Typhoon Faxai made landfall in Chiba City at 5 a.m. local time on Monday, September 9. The typhoon brought heavy, flooding rains and winds of between 180 and 200 km/h, the equivalent of a Category 4 Atlantic hurricane.

Before landing in Chiba City, as it moved north up Tokyo Bay, the typhoon delivered punishing winds and torrential rains to Minami Boso, the relatively isolated communities on the southern end of the mountainous Boso peninsula in Chiba Prefecture, including Tateyama and Minami Boso.

Much of the coverage of Typhoon Faxai has focused on how people in Tokyo, Japan's nexus of business, government, and media, were affected.

The storm killed at least three people across Kanto, a region home to 36 million people that includes Tokyo and other prefectures. Much of media coverage of the storm focused on at least 10,000 travelers stranded for about 24 hours at Narita International Airport after road and rail links into central Tokyo had been severed.

Nearly 400,000 households across the Kanto region were also left without power, with Tepco, the power utility, estimating it would take until Friday, September 13, nearly a week after the storm hit, to restore service. The widespread and prolonged blackouts pose a serious threat to human health not only because of a lack of refrigeration at supermarkets, but also because without air conditioning there is no respite from torrid temperatures. This past week, temperatures reached nearly 40 degrees Celsius in some locations.

Some residents of the southern Boso Peninsula in Chiba Prefecture have felt their region has largely been ignored and forgotten in the aftermath of the typhoon.

Great damage has occurred mainly in the southern part of Chiba Prefecture, and many people still suffer from power outages and water outages. Searching on the internet or social networking site to find out what is happening or how I can help, I can only find fragmentary information rather than a complete picture (of how the storm has affected southern Chiba), which makes me feel anxious and frustrated.

The blog post features images of widespread destruction from the storm in Tateyama, in southern Chiba.

Another article, published on blogging site Naver Matome and widely shared on social media, collected photos of the destruction in southern Chiba prefecture, giving a more complete look at the plight of local residents.

Some of the tweets collected in the blog post complain about the lack of attention paid to the typhoon devastation in Minami Boso and other communities there. Tobigeri, a soccer-focused website based in Minami Boso, on the southern end of Chiba, noted:

Minami Boso, the home base of tobigeri (sic) was severely damaged by Typhoon Faxai. However, we wonder why there have been almost no reports at all about the destruction by the media. It is a severe disaster. I want everyone to know the current state of Minami Boso.

Kamogawa, another city in southern Chiba prefecture, was also walloped by the typhoon. A twitter user shared scenes of devastation a day after the storm, and the tweet was shared tens of thousands of times:

Here's what things are like in Kamogawa… Little by little electricity is being restored. Please share this and get the word out.

Here's the situation at convenience stores in Tateyama. The shelves are bare!

Local residents are now trying to get help for their stricken communities. The Minami Boso Facebook page has a call for donations:

Please help the Tateyama and Minami Boso areas in Chiba Prefecture. We have been devastated by a typhoon, and only a small part of the destruction is pictured here — some areas are even worse. There are many areas where there are power outages, no water, and no phone or internet. There is no electricity, it's dark, there is nothing in the convenience stores, the gas station pumps aren't working, and where neither air conditioning nor refrigerator can be used. This will be a full 3 days so far following the typhoon. There are road closures, buildings collapsed, heat waves, food shortage, manpower shortages, gasoline shortage. Please help us.

The Facebook post links to a “hometown tax donation” (furusato nozei) web page that, besides documenting some of the typhoon damage in the area, is collecting and distributing tax-deductible donations to the communities in southern Chiba prefecture. The hometown tax donation scheme has generated controversy in recent years, but has generated significant funds for other disaster-affected regions in Japan.

More photos of typhoon damage can be found on Naver Matome. Progress of typhoon recovery efforts can be followed using the hashtag #南房総 (Minami Boso City).