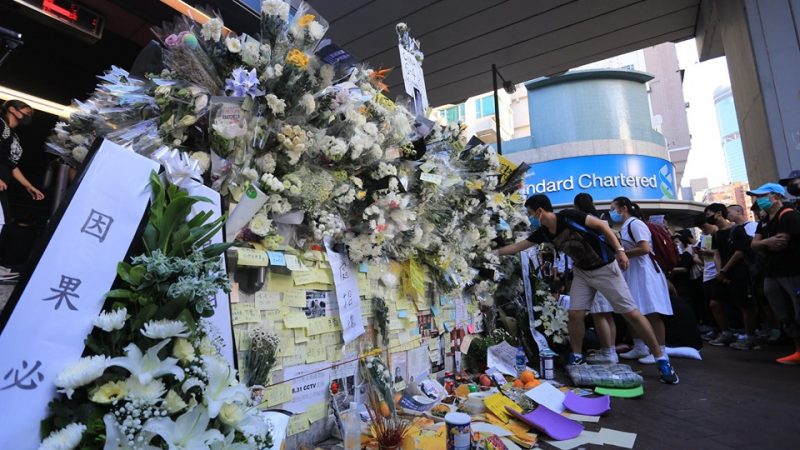 People offer flowers to “three missing protesters” outside an exit of the Prince Edward Station. Photo from inmediahk.net CC: NC-AT

For over a week, Hong Kong protesters have been vandalizing the city’s subway stations in response to what they see as excessive police aggression and the transit authorities’ cooperation with riot police. The latest destructive act took place on 8 September when protesters burned a subway exit at the Central station after the Mass Transit Railway Corporate (MTRC) shutdown down the station, leaving tens of thousands of peaceful protesters vulnerable to arrest.

Protesters began vandalizing the city subway after a large number of riot police stormed the Prince Edward station with batons and pepper spray on 31 of August. More than 50 civilians were arrested and seven were hospitalized, three of them were left in serious condition. Soon after, a rumor that three protesters were missing went viral and protesters began directing their anger at the subway authorities.

On 1 of September, angry protesters stormed the Tung Chung subway station after the MTRC shut down the subway line as the police took action to arrest protesters who attempted to paralyze the international airport.

The latest subway vandalism took place on 8 September, during a peaceful demonstration outside the U.S. Consulate in Central district calling for the US Congress to pass the Hong Kong Human Rights and Democracy Act. Once passed, the law would require the US government to assess Hong Kong’s level of political autonomy annually to determine whether it should continue to have a special trade status. Tens of thousands of protesters attended the assembly which was granted a permit to rally from 2 pm to 10 pm.

??9/8 Real-life video in front of the U.S. Consulate General in Hong Kong.
Questions: Where is the water cannon? Where's tear gas? Where's black HK Police?? This should be the most peaceful demonstration. It seems that ccp is afraid of the US!??? pic.twitter.com/vqaTLhsJ5u

At around 4 pm, riot police began arresting individuals accused of vandalism inside the Central station. The MTRC then announced the shutdown of the Central station and passengers inside the station began running to exits to escape. The operation was a deja vu of what had happened on August 31 and September 1.

Meanwhile, at 4:30 pm, police authorities began demanding that the rally outside the U.S. consulate dissolve within 45 minutes, which implied that the police would begin making arrests at around 5:15 pm. However, as the MTRC had already shut down service, there was no transportation available for the huge crowds to leave. Making matters worse, the MTRC also shutdown the Admiralty, Wanchai, and Causeway Bay stations, forcing protesters to walk for more than four kilometers to get subway service. Radical protesters vandalized a number of stations and set a fire outside a Central subway exit to express their anger.

A turning point: Beijing’s pressure on the MTRC

Such scenes were in sharp contrast with the earlier months of the anti-extradition protests when protesters saw subway stations as safe places and war-free zones. Protesters would line up at ticket vending machines to buy tickets, and residents living near the stations helped ensure that protesters arrive home safely by leaving coins and clean clothes inside the stations.

In fact, many train captains and platform assistants also expressed sympathy with the protesters. More than 700 employees of the MTRC issued a joint signature statement demanding the leaders of the subway authority resist police requests to assist their operations.

However, the relationship between protesters and the transit authorities took a turn when CCP affiliated media outlet The People’s Daily published an editorial on 22 August slamming the MTRC for assisting the “rioters”. The criticism came after the MTRC arranged an extra train to help the crowd leave a mass protest in Yuen Long on 21 August.

In view of Beijing's sanction of Cathay Pacific, the MTRC tightened up their internal policy — people are no longer allowed to leave coins and clothes inside the stations. Moreover, in the past two weeks, the MTRC has been fully cooperating with police operations as indicated by the massive arrests that took place at the Prince Edward Station on 31 August.

On the night of 31 August, police were granted access to the Prince Edward train platform after a clash between a few protesters and pro-government passengers broke out in the Yau Ma Tei- Kwun Tong Line around 10:40 pm. However, according to various investigative reports and witness accounts put together by the Stand News, as the riot police entered the station, they did not go to the carriage where the conflict took place but started pepper-spraying and beating up young people who wore masks in the opposite Central-Tsuen Wan Line.

Police took control of the scene and evicted journalists and first-aiders from the station by 11 pm. It wasn't until 1:42 am that the police allowed ambulances from the Fire Service Department (FSD) to pick up seven injured people from the Lai Chi Kok station, three of whom were in critical condition. Lai Chi Kok is two stations away from Prince Edward.

However, between 12:15 am and 1:02 am, the FSD had made several rounds of headcounts and the number of those injured was between 15 to 10 with 6 injuries in labeled in red as serious conditions. But eventually, 3 of those that were red labeled were removed from the injured list. The discrepancies in the number of reported injuries led to the spread of a rumour about the three missing protesters, some believing that they were killed.

Footage from independent media outlet Soc Rec showed a number of injured protesters. Many people are asking why the police had to evict the voluntary first aiders and reporters, and why it took more than 2.5 hours for FSD ambulances to pick up those who were injured.

The rumor about three missing protesters led to a peaceful protest outside the Prince Edward Station last week. On 6 September, a silent protest started by one girl ended up bringing together thousands of people to demand that authorities release closed-circuit TV footage to the public.

Amidst worries over possible deaths of protesters in Prince Edward MTR station on 31/8, a young girl started a silent strike of one, early this morning, kneeling down in the subway station in a request for the footage from surveillance cameras to be disclosed to public. pic.twitter.com/T44M5T4vk9

People also brought flowers to the station to express their grievance and anger:

The makeshift memorial at Prince Edward MTR station has grown even bigger since I was here yesterday. Flowers now cover the entrance gate and one banner reads 「天理難容」”heaven cannot tolerate this” pic.twitter.com/apPxGnlHk6

Eventually, the MTRC released 26 screenshots of the CCTV footage on 10 September. The MTR Chief of operating said:

With regards to claims that there was a fatality at Prince Edward Station, there was no death reported that day, according to the station’s record.

But the transit authorities refused to release all the footage citing privacy concerns. In the eyes of protesters, the MTRC is protecting the riot police by hiding the evidence of their brutality.

People’s resentment against the MTRC is reflected in its new nickname: CCP rail (黨鐵). Public sentiment has begun to see the MTRC as no longer serving Hong Kong residents, but rather as an accomplice of gangster and police attacks on civilians.

The anti-extradition protests in Hong Kong have evolved into a people's movement for an accountable and democratic government. To read more about the protests please visit Global Voices’ special coverage page.