Jumbo has been a fixture of Caribbean cricket since 1971 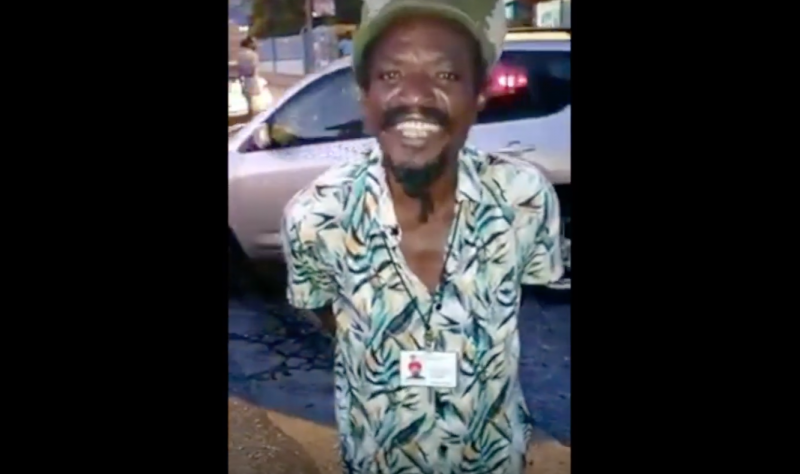 Screenshot of “Jumbo the Nuts Man,” who is used to selling his fresh and roasted peanuts at sporting events like West Indies cricket. Image is taken from a YouTube video entitled, “Support for JUMBO de Nuts Man”, uploaded by Brian Bartholomew.

The Caribbean Premier League (CPL) is a short-form regional cricket tournament held annually since 2013. Commonly called Twenty20 cricket, the 2019 tournament began on September 5 at the Queen's Park Oval in Port of Spain, Trinidad's capital, and the final will take place on October 12, quite fittingly at the stadium in south Trinidad named after cricket great Brian Lara — but this year, it is not the athletes who are taking centre stage — it is a “Nuts Man”.

Food blogger TriniGourmet describes the proverbial Nuts Man as “a fixture on the street food scene and at sporting events”:

Sometimes he moves around with a cart, other times with a tray around his neck. […] people line up, prepared to wait, if a particular vendor’s reputation has dubbed his roasting style worthy. You can get your nuts plain, salted, or honey roasted.

Nuts vendors are an important part of the Caribbean cricket scene. As cricket fans flock to the matches to watch the play and other spectators show up just to soak in the party-like atmosphere, people get hungry, and nuts (traditionally peanuts and cashews) are a good away to quell a rumbling stomach without having to leave your seat.

As far as cricket goes, perhaps the most well known Nuts Man — at least at the Queen's Park Oval — is Keith “Jumbo” Martin. Known for his flamboyant style of tossing packets of nuts with great accuracy to spectators scattered all over the stands, Jumbo has been a fixture of Caribbean cricket since 1971.

No sooner had the 2019 CPL tournament started, however, than he put out a video, widely circulated on social media channels, which registered his discontent at being told he could not sell his nuts at the event because Sunshine Snacks, a local conglomerate, was the official sponsor:

Social media erupted in support of him, with some posts entreating the Oval to “reinstall this landmark”.

[The] Thing is, fellas like Jumbo and Nuts Landing [another nuts vendor] have a grassroots ad campaign that would destroy SS [Sunshine Snacks] in the Oval in an open market…which technically is what capitalism claims to be based on. So when SS wants to lock down rights to an event…that isn't a free and open economy.

Perhaps the most creative expression of support, though, came in the form of a YouTube video uploaded by Brian Bartholomew, whose son performed an extempo verse (an improvised form of calypso):

The message got through. Four days after the first CPL 2019 match, Sunshine Snacks announced that it had partially waived their rights of exclusivity in order to allow independent nuts vendors to sell their products at the tournament.

When the cricket fans spoke out in favour of all nuts sellers being there as a critical part of the Oval Cricket Culture and the game experience…we simply decided to put our hearts ahead of our strict sponsorship rights.

Social media users widely commended the company's gesture, but not everyone was in support of Jumbo's tactics. On a public thread, some Facebook users felt that his methods were at odds with the sponsors’ paid rights; others questioned whether Jumbo had gone through the proper procedures which might have granted him the privilege of selling at the event and one Queen's Park Cricket Club insider, who spoke with Global Voices via WhatsApp but preferred not to be named, felt that compromise should have come from both sides.

As Aarti Gosein summed it up:

In the end, the inclusivity of the Caribbean cricket experience prevailed, leaving enough room for everyone.