"One of our kangaroos did not recover from the shock..." 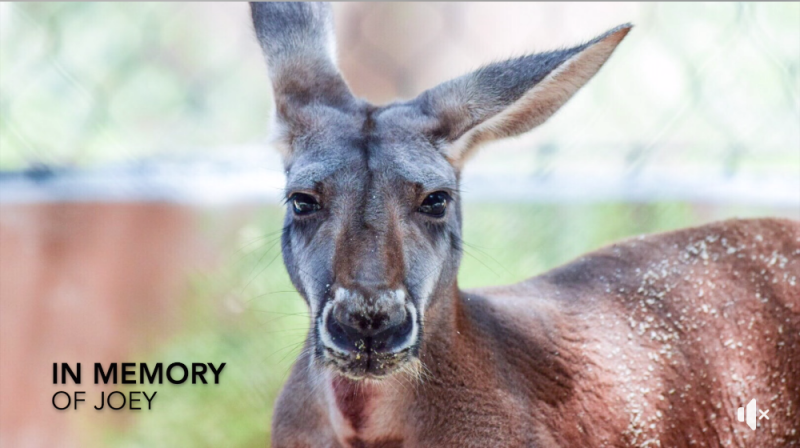 A screenshot taken from a video uploaded to the Emperor Valley Zoo's Facebook page, titled “In Memory of Joey”. The 18-month-old kangaroo died, allegedly as a result of the trauma experienced from Trinidad and Tobago's Independence Day fireworks display.

On September 6, a kangaroo, aptly named Joey, died in a Trinidadian zoo, apparently as a result of trauma he experienced from explosive noises. Joey's death has reignited a heated discussion on the controversial nature of zoos as well as noise pollution.

All over the world, zoos — originally conceived to showcase wild animals for human entertainment — are a controversial topic. Yet, most countries have zoos; in Trinidad and Tobago's case, the Emperor Valley Zoo was founded on April 23, 1947. It lies on seven acres adjacent to the Queen's Park Savannah in Port of Spain, the capital, and displays both exotic and native species of mammals, reptiles, birds and fish.

The zoo acquired four red kangaroos in August 2019, all bred in captivity and reared especially for this location. When Joey died, the zoo laid the blame squarely on the explosive noise of the country's Independence Day fireworks display, which took place within close proximity to the zoo on August 31:

We have already spoken about the loud noise levels and close proximity to the zoo of this year’s Independence night fireworks. This has affected not only our animals but animals and their families across Port of Spain. We have heard numerous stories. Within a short time of the fireworks starting, we observed the intense fluttering of some of our smaller birds who died within minutes and several other animals were visibly traumatized. We have worked to stabilize those affected animals but unfortunately we are sad to announce that one of our small male kangaroos did not recover from the shock and trauma experienced. On the night and since then we did our best with our animals. Now we must do more. We make a public call for a complete ban on fireworks in Trinidad and Tobago. Our animals and the families they are part of cannot continue in this way.

Supporters of zoos maintain that they play an important role in education, breeding and conservation of animal species, but zoo living conditions are often cramped and depressing compared with their natural habitat. In addition, captive animals can experience loneliness and sometimes, even abuse. People for the Ethical Treatment of Animals (PETA), which strongly advocates against zoos, reports that caged animals can develop a condition called “zoochosis”, in which they “rock, sway, or pace endlessly, and some even resort to hurting themselves”.

While some social media users push backed on the zoo's fireworks explanation and questioned whether the quality of the kangaroos’ enclosure was to blame instead, the majority of netizens seemed to agree with the zoo and began agitating once more to ban fireworks.

Fireworks have become increasingly popular in Trinidad and Tobago and — despite restrictions on their use laid out in the Summary Offences Act — are often set off by private citizens on special occasions. Contrary to the requirements of the Act, most people who set off fireworks (the decibel levels of which are in clear contravention of noise pollution rules) do not have the required permissions. While the Independence Day fireworks displays are public events with clear start and end times, they take place in city centres, so their effects are both far-reaching and magnified. The setting off of fireworks at Christmas and New Year's Eve, however, is mostly done in residential areas and often lasts for hours.

A new online petition in circulation says that the noise from fireworks has an adverse effect on people and animals alike, and that — in the context of local banks clamping down on foreign exchange limits — it is also “a complete waste of FOREX for Trinidad & Tobago”. As of this writing, the petition had garnered over 1,500 signatures. A previous petition to put an end to fireworks displays attracted over 3,500 supporters, not counting efforts made by animal rights groups over the years.

Facebook netizens were appalled by Joey's death. Caroline Taylor thought that “noiseless fireworks [and] better noise pollution are so sorely needed”, while Caroline Lewis commented, “How sad that humans will not learn about nature and animals before inflicting unnatural living conditions on these beautiful creatures taken out of their […] natural habitat!”

Facebook user Kerry Boyce asked whether the zoo could be relocated to a more suitable location, but DK Persad noted:

It's not just Port of Spain. There were fireworks in [south Trinidad] also. It's every event that people feel requires fireworks; Divali, Christmas, New Years, Carnival etc. I fully support the ban unless they use silent ones.

By September 8, local media reported that a private company proposed an offer of 40 acres of land in central Trinidad on which to relocate the zoo, which garnered mixed responses.

Not a fan of keeping animals in captivity, but if there must be a zoo, this is a less offensive possibility. And the sanctuary idea is best. Moving an expanded version to Central would also create jobs there. Win-win. I could only hope that the unnecessary death of a defenseless baby kangaroo could drive people on all sides of this to put their egos and agendas aside, but I ent holding meh breath.

Maria Rivas-Mc, in a private status update republished here with permission, focused more on the need to ban the fireworks:

A matter for serious consideration? How hard is it to ban loud fireworks? To not give a noise variation. To not sponsor it? You are all culpable.
That apart, I’m sure there was talk years ago of moving the Zoo and creating a nature reserve of sorts.

Sarita Rampersad, on the other hand, quipped:

So it’s easier to build another zoo and relocate the animals than ban fireworks.
Man I wish I was so rich that gov’t policy bent around me.