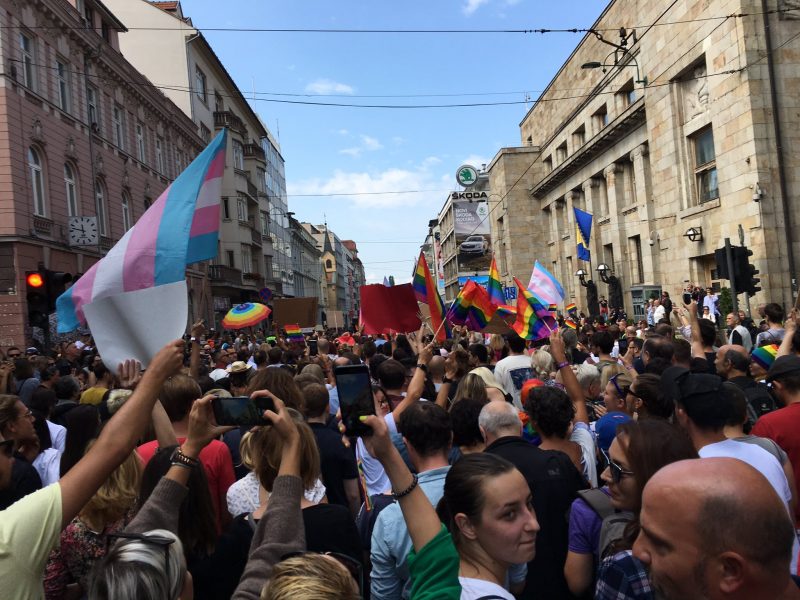 The streets of Sarajevo were bursting with merriment on Sunday 8 September as the several thousand participants in the first Bosnian-Herzegovinian Pride March paraded through the city demanding protection of the human rights for all.

Read more: Bosnia-Herzegovina to hold first ever Pride Parade in Sarajevo on September 8

The concerns expressed during the build-up about possible violence by forces that have used homophobia as political weapon proved unfounded. Anti-Pride manifestations on the eve and the morning of the parade took place peacefully. Along the parade route, police took all the necessary security precautions, and the day passed without incident.

Activist Sanjin Bužo summed up the general feeling among the participants:

We are a proof that this state, with all its limitations, can ensure the rule of human rights. When it actually wants, it can, any where and any time!

Bosnia and Herzegovina (BiH) consists of two entities, the Federation of BIH and Republika Srpska; the Federation is subdivided into 10 cantons. The highest government official of the Sarajevo canton kept his promise and joined the Pride Parade.

Tweet 1: I don't expect much from the politicians today. They mostly invoke EU values as a mix of demagogy and populism. But at least I hope some of the social-democrat ekipe (SDP, DF, NS) tweeps like Edin Forto, Srdjan Mandic and some others, while from Republika Srpska only Boislav Borenović.
Tweet 2: The Prime Minister of Sarajevo Canton Edin Forto didn't betray. #DoorPlease

Balkan Insight, however, reported that while top national-level Bosnian politicians “failed to attend the march, the US Ambassador to Bosnia, Eric Nelson, showed his support along with many other diplomats and representatives of non-governmental organizations in Bosnia.”

While Sarajevo holds its landmark first #Pride parade today, Vildana from @Fondacija_CURE highlighted that institutions in Bosnia still need to do much more to ensure the rights of Bosnia’s LGBTQI community are respected.#imaizać pic.twitter.com/eZAe9021eg

The Pride Parade received expressions of solidarity from around the region, which included visits by members from pro-democracy groups from nearby countries. Participants used the hashtags  #bhpovorkaponosa (Bosnian-Herzegovinian Pride March) and #imaizac (“[Open the] Door, please!”) to share photos and videos as the event unfolded.

So much pride and happiness today in Sarajevo!

A rainshower toward the end of the Parade produced a rainbow over Sarajevo. A number of Twitter users took photos of this serendipitous coincidence.

In Sarajevo the rain waited for the walk to end. And then we all waited for the rainbow to appear. It all seemed as pre-directed. Here it is! :-) Photo by Nineta Popović.

Returning to the normalcy of cosmopolitan and antifascist life

Before the breakup of Yugoslavia and the subsequent wars, Sarajevo held the reputation of being of one of the most multiethnic and multi-religious capital cities in the federation. It was also a cradle of modernity—along with Belgrade and Zagreb, it was one of the three main engines of Yugoslav popular culture, including the grassroots New Wave of rock music. Hosting the Winter Olympics in 1984 further bolstered the city's cosmopolitan image.

But the Bosnian War and the 1992-1995 siege of Sarajevo, in particular, seriously depleted the city's pre-war diversity and secularism. The city became divided into two sectors with homogeneous Bosniak Muslim and Serbian Orthodox Christian populations, each receiving an influx of people from rural areas who brought with them more conservative attitudes underpinned by obedience to religious authorities which officially disapprove of equal rights for LGBTQ+ people.

Yet the multiethnic urban population, located mostly in the central part of the city, still clings to the cosmopolitan traditions for which Sarajevo was once known. Some social media users commented on this aspect of the counter-protests.

I look at the photos of the gathering of “traditional families” in Sarajevo and I say to myself: if someone can prove to me that this event included more than 5% of indigenous citizens of Sarajevo, including those unfortunates Zahirović and neighborhood kid Gjiva, I would promptly shut down my Twitter account…

Organisers of the ‘Family Values March’ in Sarajevo today clearly didn't realise they were inadvertently handing out balloons in the colours of the trans flag. Perfect to be used at @BHpovorkaponosa tomorrow! pic.twitter.com/YEs3aHNgtv

The second counter-protest took place on the morning of the day of the parade in Ciglane, a working-class neighborhood. According to independent news portal Buka, it featured a group of several dozen people organized by the Muslim Association Iskorak (“Step Forward”), whose slogan is “Faith, People, State.” Participants displayed signs with homophobic slognas such as “Don't be a [slang for faggot], keep your dignity,” “LGBT are hypocritical scoundrels with sick desires,” “Keep your homosexuality between yours 4 walls,” and “Should I be ashamed for being a man and having a wife?”

For these reasons, the Pride Parade also attracted many non-LGBTQ+ participants who are simply tired of politics based on ethnic and religious divides. For many, this also was an opportunity to also express anti-fascist sentiments, which were part of the official program.