The first ever Bosnian-Herzegovinia (BiH) Pride parade is scheduled to take place in the capital, Sarajevo, on Sunday, September 8.

The event will also function as a protest against inequality and violations of the rights of lesbian, gay, bisexual, trans, intersex and queer people in the country. Its main demands are an end to widespread violence against LGBTQ+ people, and equal access to public spaces that they are entitled to as citizens.

After North Macedonia held their first Skopje Pride event on 30 June, Bosnia and Herzegovina remained the only Balkan country where a pride parade had not taken place.

As elsewhere in the region, the event has been organized under the shadow of threats of violence and in an atmosphere of homophobic backlash in the traditional and social media, formally lead by organizations advocating for ‘traditional family values.’ The police have announced increased security measures.

In the past, Sarajevo authorities have denied permission for similar marches and protests. This time, cantonal government institutions again asked for the parade to be postponed, citing security concerns, but the organizers have been adamant it will take place as planned.

The Pride March doesn't promote extremist positions, doesn't incite violence, and doesn't infringe on any right of other people. There's no legal ground to forbid it or to pressure the organizers to cancel it. Check the verdict of the European Court of Human Rights in the case Plattform “Ärzte für das Leben” v. Austria (1988).

The campaign in support of the march has been in effect since the spring under the slogan “Ima izać”—a local slang expression commonly used by passengers to address bus or tramway drivers meaning literally “there's someone who wants to go out,” and loosely translated by the March organizers as “[Open the] door, please!”:

…It also refers to opening the door of the proverbial closet when LGBTIQ people come out—that is when they reveal their sexual orientation, gender identity and/or sex characteristics to themselves or others.

Low visibility is still among the biggest problems of the LGBTIQ community in BiH. By coming out and participating in the Pride March we empower ourselves and other LGBTIQ individuals who still don’t have the courage to take that step. That’s why we say “Door, please!”, because this is a march of LGBTIQ people who deserve the chance to come out of the closet and proudly claim their place in the society.

Several civil society groups fighting for human rights expressed support for the March from the moment it was announced. The annual Political Accountability and New Technologies – POINT Conference, for instance, incorporated a rainbow flag into the visual elements of its 8th edition held in May, to help promote the March.

It’s amazing to see the ?️‍? at #point80 at the #disinformation session. Especially thinking about Poland and how much #fakenews we have about #lgbt community. Also great support for the first #pride to happen in #Sarajevo pic.twitter.com/jw76eflASc

The March is also being strongly promoted online with the hashtags  #bhpovorkaponosa (Bosnian-Herzegovinian Pride March) and #imaizac (“Door, please!”). Organizational channels such as the Twitter account @BHpovorkaponosa have been posting messages of affirmation, such as testimonials from people from different walks of life who support the event, including many non-LGBTI+ allies who simply wish to live in a society free of discrimination of any kind.

Tweet: See you on 8 September because we need to go out for freedom of all!
Today we share the messages from the professor of Faculty of Economics Professor Selma Kadić – Maglajuć, and Jelena Kalinić a blogger at Quantum of Science, blog run by Association for promotion of natural sciences “Science and the world.”
Video: SKM: “…I don't want to live in a Medieval society where someone claims right to determine who should be allowed to love someone else and whom, and in what way… Precisely because of that I shall walk for human rights!”
JK: “We are not free unless everybody is free. Science doesn't support discrimination. Open the door please!”

Some of the messages are provided in English translation, a proven tactic used by similar events in the region to attract participants from abroad.

“I will go out on 8 September and walk for the [rights of] LGBTIQ persons, and also for the male and female workers, male and female Roma people, persons with disabilities, and all other marginalized groups whose existence is invisible or someone wants to forbid it or limit it.” – Masha Durkalić.
See you on 8 September!

Influential activists from other countries, such as Mona Eltahawy, and individuals such as UN Women representative to Bosnia and Herzegovina David Saunders have sent messages of support. In general, the intiative has received robust support from the international community.

Some event supporters have addressed the homophobia that has become part of the public discourse within Bosnia and Herzegovina ahead of the Pride March. The Facebook page “They are all witches” (Sve su to vještice), for example, had been posting memes quoting the ‘greatest hits’. 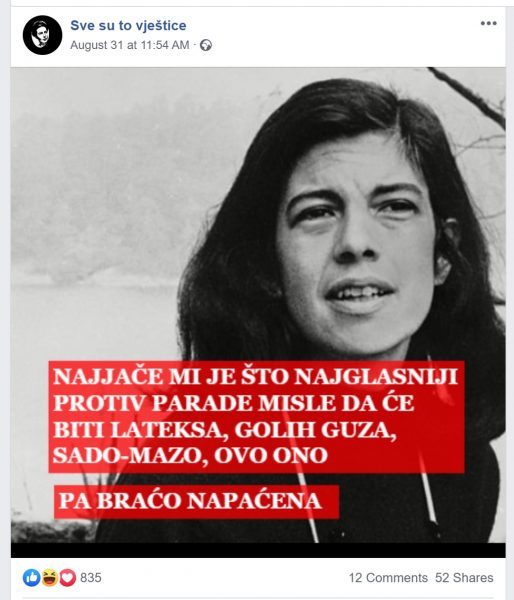 “The most impressive thing for me is that those who are the loudest in opposition to the Pride March think that it will be all about latex, naked butts, sadomasochism, and things like that.
Oh brothers of mine, how have you been suffering!”

The organization BH Journalists, a member of the Association of European Journalists and the European Federation of Journalists, has condemned the media's violation of the human rights and jeopardzing of the safety of LGBTQ persons by spreading hate speech and inflammatory rhetoric about the Pride March.

They called upon the journalists and editors of online portals to also pay attention to user comments which have the same effect, and to moderate those that “oppose freedom of expression, acknowledgment of diversity, pluralism of opinions and preventing all forms of discrimination.”