Students in HK understand that freedom is not a given 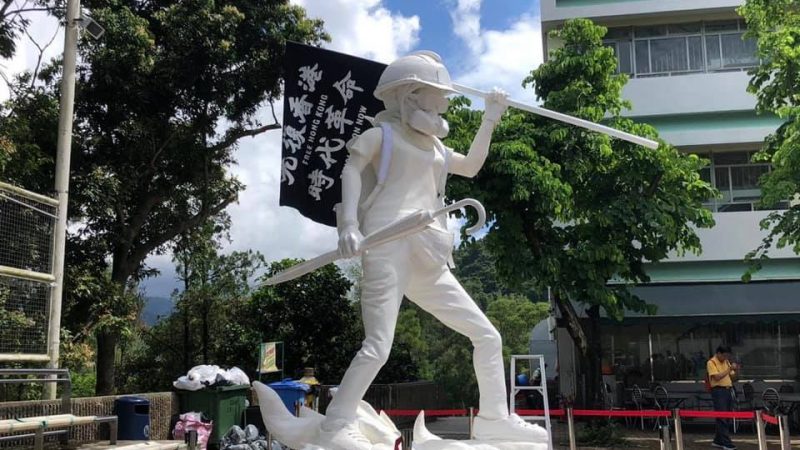 The summer holiday ended on 2 September and students in Hong Kong have returned to schools and universities. Many pro-establishment supporters were expecting that this would mark a gradual die down of the disruptive protests that have taken over the city.

However, they may have underestimated the determination of Hong Kong’s young generation as thousands of university and secondary school students have brought street protests to the school campus.

Statue of democracy in “the University of the Rioters”

On 31 August, a “Statue of Democracy” was erected at the Chinese University of Hong Kong. The statue, a work sponsored by online crowdfunding, depicts a protester in the front line equipped in full gear with a helmet, goggles and gas mask, holding an umbrella in their right hand and a flag with the slogan, “Reclaim Hong Kong. Revolution of our Time”.

Earlier in June, The Chinese University of Hong Kong was labeled (in Chinese) “The University of the Rioters” on Google map as a part of a smear campaign against university students’ participation in the anti-extradition protests. But both the students and alumni of CUHK gladly took on the label with pride.

During the university student union’s orientation with the incoming students, black t-shirts and typical protest gear became the dress code:

What freshers’ orientation in Hong Kong looks like this year

On the first day of the new school term, the campus was the main site for the university class boycott assembly:

About 180 high schools have students joining class boycott action as well. As the majority of the secondary schools are sponsored by the government’s education bureau, high school students have to face a lot more pressure as they participate in protest actions. Before the school term started, the education bureau handed down a notice demanding that school administrators discourage class boycotts, mute political discussion in classrooms, and submit protest reports to the bureau. Yet, the students have not backed off.

On the first day of school, thousands of high school students gathered in Central to attend a class boycott assembly:

On the second day, they returned back to school and formed a human chain, reciting the five major demands of the anti-extradition protests, including complete withdrawal of the bill, an independent investigation of the incident, democratic political reform, etc…:

Children are our future.
Why are these HK students holding demonstrations at school? All because they know too well: Freedom is Priceless! Democracy must not be abused!
.#HongKongProtests #antiEALB #FreedomHK pic.twitter.com/Gkfebn7pTR

Some of the protests are very creative and touching. In one school, when the school authorities played the Chinese national anthem during the inauguration ceremony, students sang “Do you hear the people sing?” instead:

#TearjerkerAlert Secondary students singing “Do You Hear The People Sing” instead of the Chinese national anthem during the school Inauguration ceremony. They remained silent when the school anthem was played & chanted slogans afterwards. #BackToSchool #HongKongProtests #antiELAB pic.twitter.com/HWxtUXsSk0

Only a few schools allowed students to take collective action inside the campus:

Secondary school students gathered at the basketball court and the corridors on each floor, chanting “there are no rioters, only tyranny” and “#Hongkongers, add oil!”

Freedom is not a given. In some high schools, pro-establishment alumni gathered outside the campus to intimidate students. Even worse, a number of school administrators called up police officers to stop the students from protesting. A school boy was hurt rather badly and hospitalized as a police officer chased after him inside the campus:

A high school in TaiPo, the Principal refused to let anti-government students get inside the school area this morning. Police came and recorded ID no. of some students. A boy was hurt when taking down by police. #HongKong #HKPoliceState #HongKongProtests pic.twitter.com/2QHnNO9olD

Instead of reflecting upon China’s policy in Hong Kong, Beijing's Hong Kong and Macau Affair Office recited the need to strengthen patriotic education in Hong Kong. The proposal of a compulsory moral and national education curriculum in Hong Kong in 2012 nurtured Joshua Wong and his cohort of student activists. Currently, the anti-extradition protests have brought up a more resilient generation of student protesters. Repressive policies may control the present, but not the future.