Painting the fears inside us all: A conversation with Syrian artist Rashwan Abdelbaki

While the portrait of Syria has been painted in the media mostly with images of war and destruction, Syrian artist Rashwan Abdelbaki has sought opportunities to challenge stereotypes and perceptions that ignore or disregard a country that “has provided much to enrich human civilization” and “represents a wonderful mosaic of more than 18 religions.”

Born in the southern Syrian city of As-Suwayda and now living in New York, Abdelbaki, 35, began showing interest in the arts from his teenage years. In 2003, he found his way to the Faculty of Fine Arts in Damascus, where he received a bachelor’s degree in printmaking techniques.

His works explore some of the most pressing issues of our time including immigration, racism, religion, and politics, with vivid colors and dynamic interactions creating an ongoing conversation and capturing the imagination of his audiences.

In September 2016, Abdelbaki received a one-year fellowship from the Institute of International Education’s Artist Protection Fund (IIE-APF) that led to his becoming an affiliated fellow at the American Academy in Rome. In January 2017, a week before President Donald Trump unveiled his “travel ban” restricting people from mainly Muslim-majority countries from entering the United States, Abdelbaki arrived in New York to continue the IIE-APF fellowship, hosted by ArteEast and the Elizabeth Foundation for the Arts.

Since July 2018, Abdelbaki has been a member of the artist-at-risk program at the Westbeth Artists Community, which provides affordable live and workspaces. The program was created by the New York City Safe Residency Program and is led by a coalition of groups supporting freedom of expression.

In an interview with Global Voices in New York, Abdelbaki said that he uses painting, etching, ‎engraving, digital art, installation and video to express what he sees as the “negative effects of racism, religion, and politics that are all striving to divide us and destroy our faith in humanity.”

I had the opportunity to interview Abdelbaki in August 2019. Excerpts from the interview follow:

Omid Memarian: How have years of war in Syria influenced and affected Syrian artists, and you in particular?

Rashwan Abdelbaki: The war has had a negative impact on everyone, especially economically and security-wise, prompting many to leave the country in search of new opportunities. After my graduation from college in Syria, my primary interest was music, exploring the relationship between the musician and the instrument. At the time, my art was filled with music, joy, light, and theater. But in 2011, I started to feel the changes that war brought to my country. On a personal level and as an artist, the war confused a lot of ideas within me, and my vision of things changed. I began to think more about the dangers that threaten our common humanity. My focus shifted to questions regarding the negative effects of racism, religion, and politics that are all striving to divide and destroy our faith in humanity. 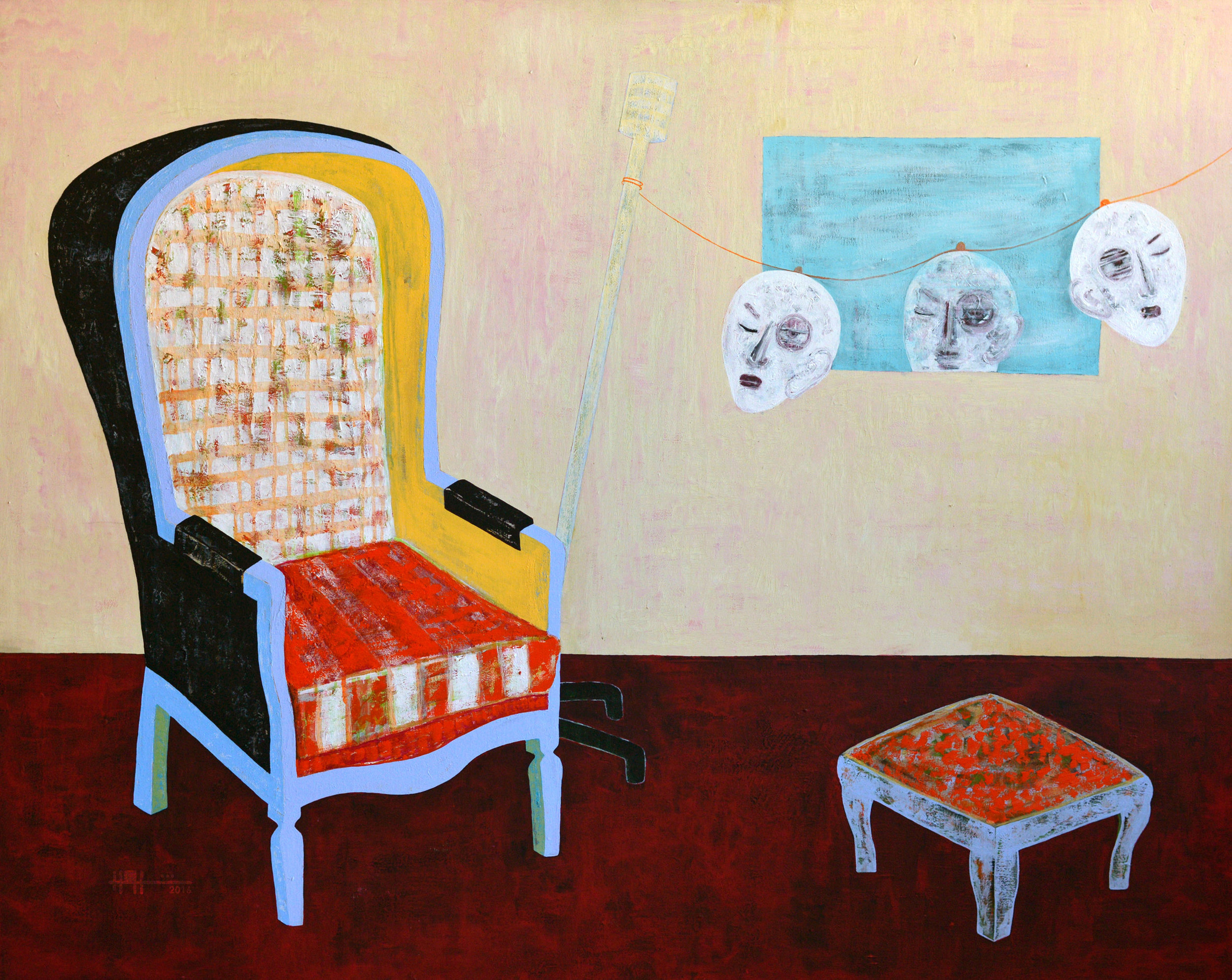 OM: What differences do you see in the body of work you created prior to migrating to the U.S. and after you moved here?

RA: Before I came to the U.S., my paintings were focused on human environments and the relationships between different groups of people, sometimes the full body in paintings like Wedding Night and Early Marriage. The first painting I created in New York was Last Supper, First Wall. This painting was in response to Executive Order 13769 [President Trump’s travel ban] that limited my mobility and later became worse by requiring me to either leave or stay. Jesus asked that we all act with and honor humanity. Our response has only been to continue to build walls between us. Then I began to focus more on the face, the open eye, and physical lines that represent our abilities and freedom in paintings like One Line, Crossed Line, and Safety Line. In these works, there is a clear, physical line above the human who looks like he is drowning but still holding on to hope.

OM: In many of your paintings, people have one eye and in general, the face seems disfigured. What do these figures say about your understanding of the human condition and the important issues of our time?

RA: In the portraits, I am speaking to the fear inside us all that keeps us awake, even when we want to close our eyes and sleep in peace. But because of what we are witnessing now—violence, wars, and racism—we need to keep one eye open to know what’s happening around us, to be ready for any shocks or surprises. I put a circle around the open eye in my portraits to draw attention to the eye. These people, like all people, are also prisoners of their own beliefs, so I paint them with striped garments in empty cells. They cannot see beyond the space of their beliefs. This is the current state of our world and humanity today due to religious conflicts, corrupt politicians and their misuse of power, as well as discrimination. 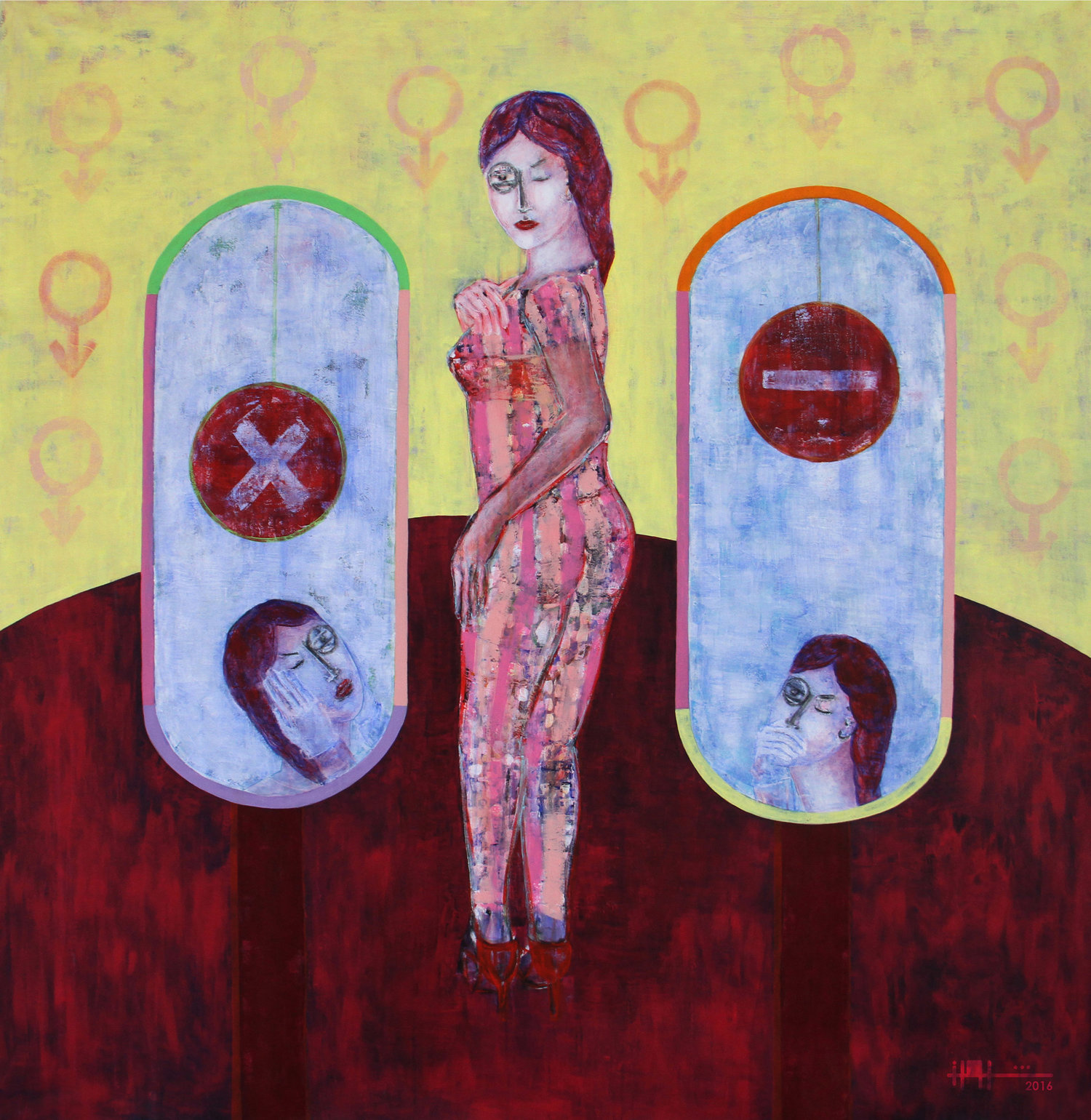 OM: In many of your paintings and sketches, there seems to be a sense of curiosity and searching for the relationship between individuals and their surroundings. The direction of heads and eyes, and interactions with others in Love, as well as Last Supper, First Wall and Number 7 creates an overarching theme embedded beneath your use of vivid colors. What inspired you to create these works?

RA: It's true, in the very beginning I was trying more to identify the character (one open eye, one eye closed) through physical relationships and empty spaces—to represent a scene, sometime, somewhere. You can see that in Last Supper, First Wall and Number 7, where groups of people are gathering as if on doomsday, enclosed in interior spaces and with transfixed gazes, as if they are staring outwards but at nothing in particular.

But in the painting Love, and the paintings Safety Line, Whisper, and Hope, there is something specific: man and woman, in a moment of love, with lines and barriers. They both have just one eye open and the other closed, like all the characters in my paintings, but the special characteristic here is that together they have two open eyes, and the whole scene becomes clearer, like they are protecting one another.

The colors in all these paintings are impressionistic or abstract sometimes, like what's happening around the world. I use them to refer to different political parties or religions, and you can see that in these characters and their stripes. But I also use them to create a vision of hope that I am looking for and want to give to others.

OM: The color palette you use is appealing and inviting, but some of the concepts you deal with are unsettling, like Music on Paper 4 or Emptiness. What was your thought process in creating these situations?

RA: I understand what you mean by “unsettling.” In the prints that come from other concepts than what Emptiness came from, there’s an insistence on reduction of elements, so we are looking at a symbolic representation of the thing rather than the thing itself. Likewise, in these paintings there’s a strong stylization, a canonization of formal elements to essentialist tropes. There are always one or two figures in a room within a garish color palette that appears to suggest confinement and violence. I think I am personally not far from all this. In many cases, I reflect my “unsettled” state from that feeling I had back in the days when I was working on music, to process that unsettled feeling of fear that I’ve had in the last couple years. I want to understand the illusion created by this fear within me, and how to defeat it. 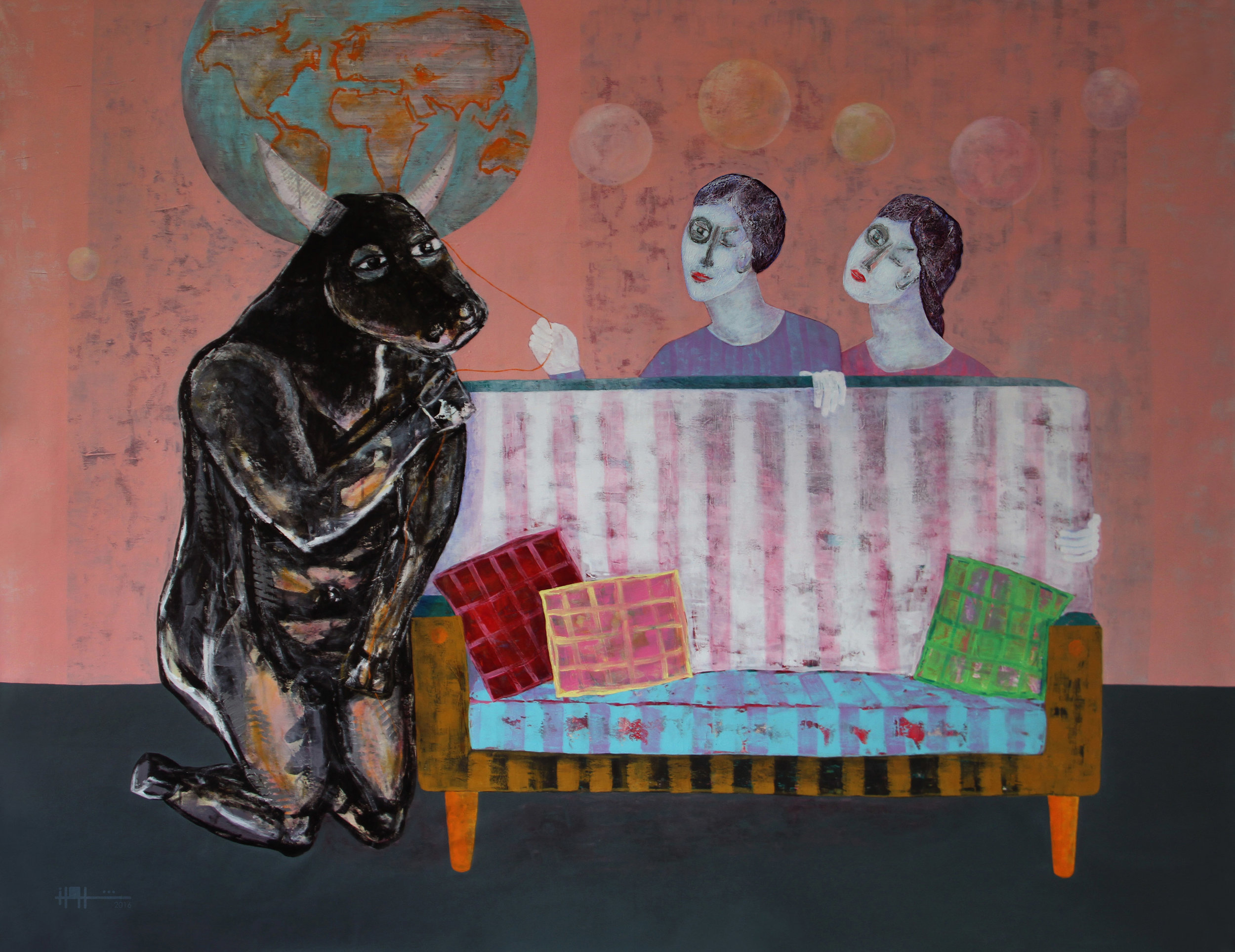 OM: How has living for the past two years in New York changed you as an artist? Are there things that you see differently now regarding art and identity issues as well as geography and politics?

RA: Traveling and living in New York has helped me become acquainted with new civilizations, cultures, languages, music and so on. I was unable to learn about them in my motherland except through the internet or news. Here I learned more about my artistic mission by interacting with people in the U.S. and Europe. When they saw the face with one open eye and one closed eye, it touched them, and from their comments I felt their need for safety, peace, and love.