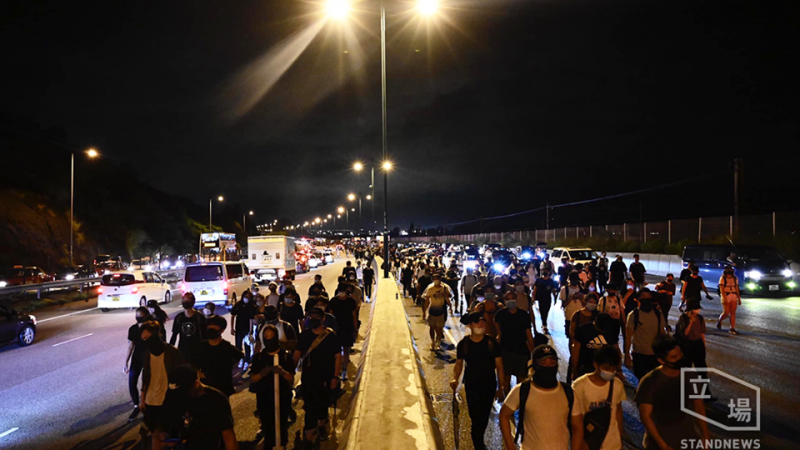 Hundreds of protesters retreated from the airport. Photo from the Stand News. Used with permission.

Thousands of protesters took public transportation to the city’s International airport on 1 September in an attempt to paralyze the airport. However, their disruptive action left them stranded on the airport island located 35 kilometers away from downtown.

As the police started making arrests, protesters decided to make their way back on foot along the highway and hundreds of private vehicles came to their rescue. Some netizens called the incident the “Dunkirk evacuation” of Hong Kong.

@hker posted the photo showing the long queue of pick up cars on the airport highway:

Dunkirk evacuation in hong kong
those braking night are the driver who volunteering pick up the demonstrator who were trapped in highway as gov shutdown all the public transport between airport and downtown #HongKongProtesters #HongKongPolice #antiELAB #HongKong #FreeHongKong pic.twitter.com/f7zy68RuFk

The Dunkirk evacuation refers to the evacuation of 330,000 French, British, Belgian and Dutch soldiers who were trapped on the beaches of Dunkirk, France during World War II.

9.01 Airport Rally have been compared to Little Ships of Dunkirk, when 850 private boats sailed to rescue over 336,000 soldiers.

Tdy hundreds of protestors walked on Lantau Hwy from airport. Numerous altruistic citizens showed up in cars to drive them safe back home. pic.twitter.com/QL3IQQ5elR

The anti-extradition campaign has evolved into anti-government disruptive actions as the government continues to refuse a complete withdrawal of the bill and an independent investigation into police brutality. The latest airport action was triggered by the violent clashes between protesters and riot police after the unauthorized rally on 31.

Previously, protesters mobilized a 5-day peaceful sit-in at the arrival hall until August 13 as the High Court issued an injunction on protests. As the injunction does not cover areas outside the airport, protesters attempted to jam airport traffic and paralyze the airport.

On 1 September, hundreds of protesters arrived at the airport at around 1 pm and gathered at the bus terminal. The radical ones took action to block airport entrances with obstacles. 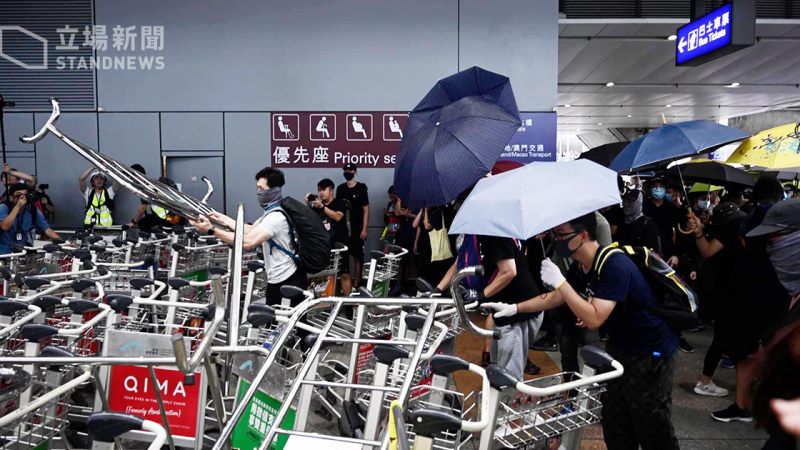 Some protesters attempted to block airport entrance. Photo from the Stand News. Used with permission.

Riot police soon arrived and bus service was suspended. The Metro company also suspended train service from Hong Kong Island to the airport in order to prevent more protesters from arriving at the airport.

According to a detailed timeline of the protester's action and police operation from the Stand News, at around 4 pm the riot police were set to begin making arrests. To escape, protesters decided to walk 5 kilometers to Tung Chung, a nearby suburban residential district with subway and bus connections. Along the way, some set up barricades to stop riot police from chasing after them. A few of them also threw objects and iron bars to the subway rails, and the Metro company further suspended trains running from the Airport to downtown. 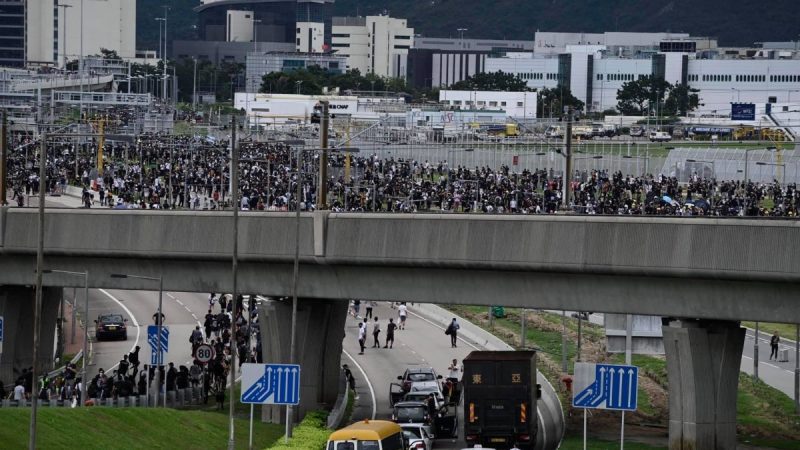 Thousands of protesters walked to Tung Chung from the airport. Photo from the Stand News. Used with permission.

As all public transportation at the airport ceased operating, ordinary citizens, tourists, and airport workers had to walk half an hour to Tung Chung. However, when they arrived, the Metro company suspended the Tung Chung subway service. Outraged protesters vandalized the station.

Without the subway, there are only a few options to leave Tung Chung — either taking a ferry to Tuen Mun or bus to Mui Wo where there is a ferry to Central. However, these options were too risky as the riot police would be waiting for them at the piers. Hundreds of protesters decided to walk another 12.6 kilometers to Yan O station or 23.6 kilometers to Lantau Toll Plaza, where bus service was still available.

To prevent police vehicles from going after the protesters, some private vehicles drove slowly to block the road and jam the traffic while others picked up protesters along the way. 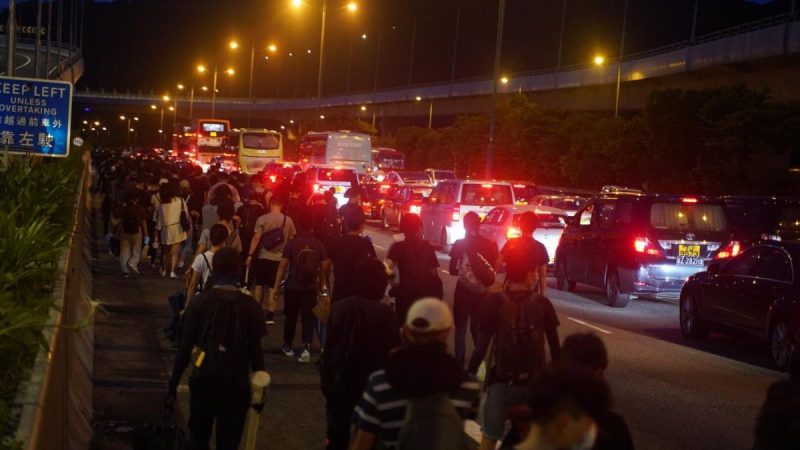 Hundreds of protesters walk from Tung Chung to Yan O or Lantau Toll Plaza. Photo from the Stand News. Used with permission.

Hundreds of vehicles joined the rescue action and the majority of them were coordinated through Telegram groups.