As Jamaica seeks the return of Taino artefacts from Britain, relics at home may not be safe

They are 'priceless', 'significant', and 'belong to the people' 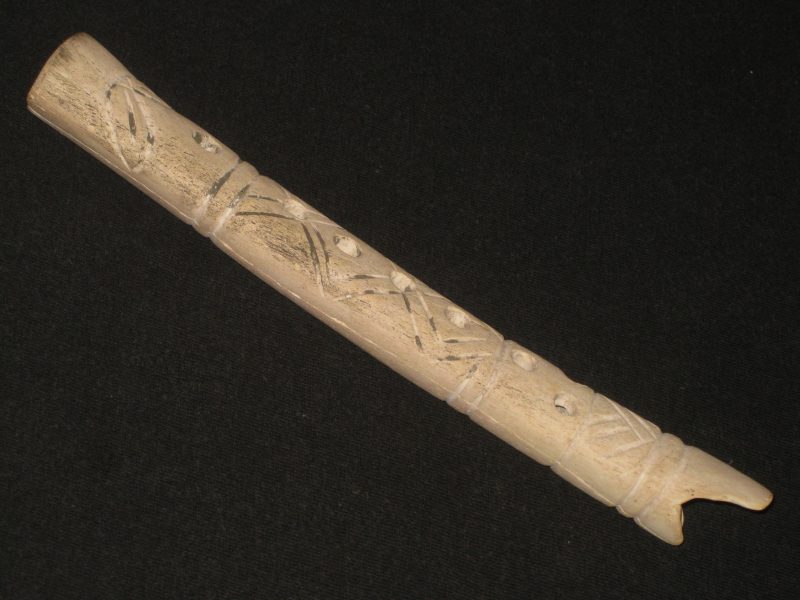 A Taino bone flute, 7.5 inches in length, from the White Marl in Jamaica. Photo courtesy Paul Banks, used with permission.

Jamaica’s indigenous Taino people (once known as the Arawaks) have a somewhat shadowy existence in the national psyche, partly because there are very few historical records about them. Today, only artefacts and archaeological findings remain — and although there are Jamaicans with Taino heritage, Italian explorer Christopher Columbus’ arrival on the island in 1494 practically decimated the Taino population.

Yet, there is a resurgence of interest in Taino history. For the first time in 500 years, Jamaica has its first Taino chief or cacique, who was installed in June 2019. A month earlier, the Institute of Jamaica celebrated Taino Day with talks and activities and a new illustrated children's book, “Boianani: A Taino Girl's First Adventure,” was launched.

Most significantly, on July 23, Minister of Culture, Gender, Entertainment and Sport, Olivia Grange, said in parliament that the government is working — via the National Commission on Reparations — to have world-renowned wooden Taino artefacts returned to Jamaica. These include the carving of a “birdman” spirit, a “boiyanel” (rain giver) and a “canopied cemi” (a representation of a spirit or ancestor), all of which were found in a cave at Carpenter’s Mountain, Vere (now part of Manchester) in 1792.

In her speech, Minister Grange noted:

They are priceless, they are significant to the story of Jamaica, and they belong to the people of Jamaica.

A spokeswoman from the British Museum, which currently curates the artefacts, said on August 13 that they had not yet received an official request to have them returned. Many Jamaicans agree that the artefacts should be returned, but it may not be that simple.

In a two-part post that dealt with issues of restitution as it relates to items of artistic, cultural, or historical value, former curator of the National Gallery of Jamaica, Veerle Poupeye, noted on her blog that Caribbean museums need to adhere to higher international standards. Poupeye, who currently works as an independent curator, researcher, and writer, noted:

None of the Carpenter’s Mountain carvings have […] ever been exhibited in Jamaica or, for that matter, elsewhere in the Caribbean. […] The National Gallery of Jamaica (NGJ) has requested the loan of these carvings on two occasions […] the loan was declined or not even responded to […]

Jamaica is certainly in a position to make a restitution claim for the Carpenter’s Mounting carvings, or at least inquire whether they would be loaned for an exhibition today — they have after all been loaned internationally. […] It is high time for Caribbean museums and relevant authorities to do an inventory of relevant holdings in overseas museums, to consult with local and international stakeholders and articulate clear policy positions on these matters, nationally and on a shared regional level — this is something for the Museums Association of the Caribbean (MAC) to look into. This also means, however, that there has to be a greater effort in the region to meet international museum standards, not only to be able to negotiate such loans, or restitutions, but also for the benefit of the requesting institutions, their general collections and the mandates they serve.

At the very least, these carvings should be readily available for exhibition to Jamaica, sooner rather than later, and some form of compensation could also be requested, either monetary or in the form of technical assistance to the local museum. […] The Caribbean also needs to get its house in order with how cultural property is traded and collected within the region.

Despite this newfound interest, there is currently no museum in Jamaica dedicated to the Tainos. A surge in criminal activity resulted in the closure of the only Taino museum in White Marl several years ago. However, numerous stone, coral, ceramic and wooden “museum quality” artefacts — found primarily by woodsmen — are now either part of private collections or removed from Jamaica, and most of them lack adequate documentation to establish their provenance.

Many of these sites are currently endangered: some, such as a series of caves in Cambridge Hill, St. Andrew, have been destroyed and more recently, roadworks and other construction activities like limestone and gypsum quarrying have damaged others and continue to threaten their survival.

White Marl is probably the most documented site currently facing imminent destruction [due to highway expansion]. Various sites were destroyed by the Edward Seaga Highway [a North-South toll road]. An apparently very significant site (probably including burial caves) was destroyed during the first phase of the PJ Patterson toll road [on the St. Catherine-Clarendon border], and it is possible (indeed highly probable) that the pending highway to Morant Bay will threaten both known and unknown sites. Several sites have also been destroyed, or are being destroyed by unfettered squatting and uncontrolled urban spread – for example, Dallas Mountain [on the outskirts of the capital, Kingston].

Sites include caves with Taino petroglyphs (rock carvings) and pictographs (paintings made from natural pigments and animal fat). In a recent article in the Jamaica Journal, Joanna Ostapkowicz, a research associate in Caribbean archaeology at the University of Oxford's School of Archaeology, described these sites as “significant places of deposit and belief” that were used for burials, religious shrines and safe depositories.

The Jamaica Gleaner reported, for example, that an apparent solitary burial shelter cave containing several bones, a clay zemi (Taino spirit) and ceramic pottery fragments, was found during mining activities at a limestone quarry in the Hellshire Hills. While those artefacts were given to the Jamaica National Heritage Trust, mining subsequently resumed.

The impending expansion of the Nelson Mandela highway at White Marl, in the parish of St. Catherine, will also impact important sections of that site, which  — according to the University of Leiden — comprises “one of the largest and densest pre-colonial settlements on the island, with large mounded middens, numerous human burials and a rich array of material remains including greenstone axes and decorated shell adornments”.

Recent archaeological excavations in the area, a collaboration between the Nexus 1492 group, the department of history and archaeology at the University of the West Indies’ Mona campus in Kingston, and the Jamaica National Heritage Trust, have been a concerted salvage effort.

The irony of it all is that Jamaica’s Coat of Arms, created in 1662, portrays a Taino man holding a bow and a Taino woman carrying a basket of fruit, accompanied by the national motto: “Out of Many, One People” — but is the country doing its best to preserve what is left of its indigenous legacy?