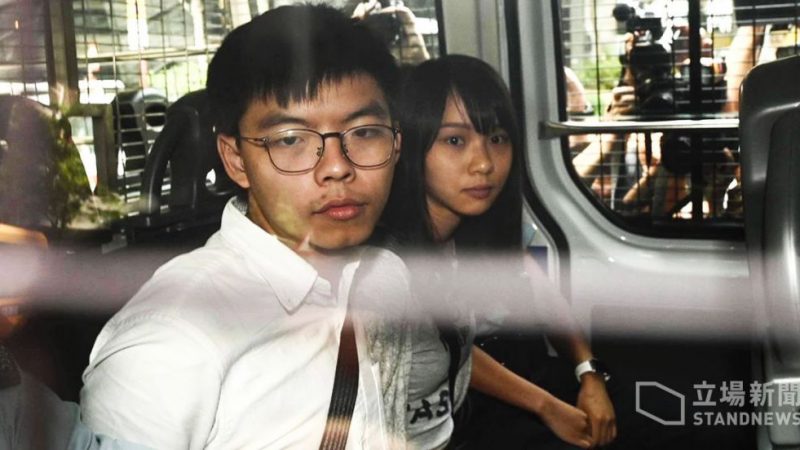 Joshua Wong and Agnes Chow from Demosisto were arrested on August 30. Image by The Stand News. Used with permission.

As the People's Republic of China is getting ready to celebrate a major event, the 70th anniversary of its foundation on October 1, political pressure to restore order in Hong Kong is mounting. Against such background, the Hong Kong government has shifted its crackdown tactics from detaining demonstrators on protest sites to arresting a wider network of pro-democracy activists and leaders.

On August 29, Andy Chan, the leader of the banned pro-independence Hong Kong National Party, was detained at night as he tried to board a flight to Japan. The police told the press that Chan was arrested on suspicion of rioting and assaulting a police officer.

On August 30, pro-democracy student activists Joshua Wong and Agnes Chow of Demosisto were arrested and detained for inciting, organising and participating in an unauthorised assembly outside Wan Chai police headquarters on June 21.

Wong was pushed into a private vehicle on his way to a subway station at 7.30 a.m. and escorted to the Wan Chai police headquarters in downtown Hong Kong. Chow was arrested at her home in Tai Po. Both were released on bail, but will have to observe a curfew between 11 p.m. and 7 a.m., and report to the police twice a week.

Demosisto Chairman Ivan Lam was also charged with inciting an unauthorised assembly. Yet Lam has been out of Hong Kong since August 28.

Althea Suen, a former president of the University of Hong Kong’s student union, was arrested on August 30 on suspicion of conspiracy to destroy or damage property under the Crimes Ordinance, as well as “entering or remaining in precincts of the Chamber” under the Legislative Council (Powers and Privileges) Ordinance on July 1.

Also on August 29, two protest organizers were attacked by people who most likely belong to Hong Kong triads. Jimmy Sham, convenor of the Civic Human Rights Front (CHRF), a key organization in the anti-extradition campaign, was attacked by two masked men with a knife and a baseball bat. While Sham escaped the sudden attack, his companion was hit by the baseball bat several times and hospitalized.

Prior to the attack, several dozen people had organised a protest outside the office of an affiliate of the CHRF over the organization's involvement in the protests. Sham confronted them verbally on the spot.

Chung Kin Ping, the applicant of Yuen Long march on July 27, was also attacked by four men with metal rods and umbrellas at around 4 p.m. on August 29. Chung was then hospitalized.

Police crackdown and arrests have failed to deter protesters from taking disruptive acts in the past. Almost every day, there are smaller-scale protests and assemblies taking place in districts. Very often, those peaceful gatherings end up in clashes with the police force. Since June 12, tear gas, rubber bullets and bean bags rounds have become a regular feature of weekend marches.

The CHRF has applied for a police permit to hold a rally on August 31 demanding the withdrawal of NPC's election framework, the complete withdrawal of the extradition bill, and an independent inquiry into the anti-extradition saga. Those demands are shared by most protesters.

Yet the police has rejected the application on August 28. This means the rally will be illegal and would very likely end up in city-wide violent clashes and chaos, as the police force has the authority to arrest anyone who shows up in the protest.

While the majority of arrested protesters are not affiliated with any political groups, Beijing and Hong Kong government believe that the anti-government protests have been manipulated by foreign and local political forces. For example, after the peaceful human chain demonstration of “The Hong Kong Way” on August 24, a Beijing party-affiliated mouthpiece denounced the symbolic action as “a poisonous path to Hong Kong independence” and demanded a throughout crackdown on pro-independence forces.

Three days later, on August 27, Chief Executive Carrie Lam, who previously claimed that she wanted to resolve the political crisis through dialogue, stated that she could not accept the protesters’ demands and would not rule out the possibility of activating the Emergency Regulation Ordinance. This law could empower the government and police authority to arrest suspects, extend detention, control transportation, appropriate and search private properties, impose censorship, and interrupt communication including blocking websites among other measures.

The proposal was discussed among government top officials in preparation for the upcoming massive protest on August 31, which marks the fifth anniversary of the decision of the steering committee of the National People Congress to impose a political screening mechanism of candidates for Hong Kong universal suffrage of the Chief Executive in 2014.

On social media, people were outraged by the massive arrest and the attacks. However, many underline that such fear tactics are ineffective as the protests are mobilized in a leaderless decentralized manner. @Lam Ching's tweet has reflected the common sentiment among pro-democracy citizens:

對於大搜捕，我只係可以話：「You can’t kill us all」

Concerning the big arrest, all I can say is “You can't kill us all”. No matter how many you have arrested, I will continue to come out. See if you have the balls to arrest 2 million people.

In response to the police action, a number of pan-democratic lawmakers slammed the arrest as fear tactics and vowed to stand with people during the August 31 rally.